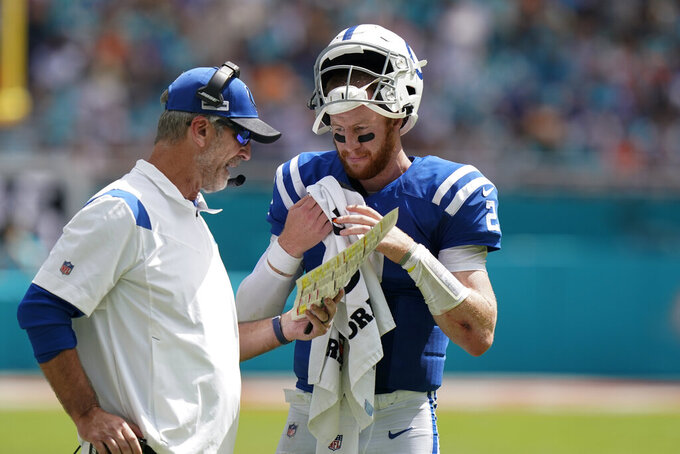 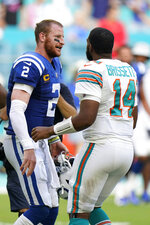 Buckner, two-time All-Pro linebacker Darius Leonard and defensive end Al-Quadin Muhammad sent a message to their teammates: Do your job, stay focused and sacrifice a little more. That approach led to more more physical practices and a potentially season-changing victory at Miami.

“It bothered me," Turay said. “Watching Buck the first two weeks, being out there just pressuring the quarterback, we couldn’t just leave him hanging and stuff like that. So it bothered me last week, and we needed that talk."

The last time Turay remembered having “that talk” came in 2018 when the Colts were 1-5 in coach Frank Reich's first season. They responded by winning nine of their final 10 games to make the playoffs.

Whether Indy can replicate that turnaround remains to be seen.

There were encouraging signs on Sunday, albeit against a sputtering Dolphins offense that has the league's second-lowest points total (62).

Carson Wentz had his best game of the season and, not surprisingly, it came on the same day Jonathan Taylor ran for more than 100 yards for the first time this season. Even the special teams unit forced a turnover that led to points.

This was the way Indianapolis envisioned playing.

They did it once.

Now the Colts want to use that same formula as the blueprint for another midseason turnaround.

“At the end of the day, the goal is to win," tight end Mo Alie-Cox said. “We were losing, so guys are going to listen with open ears. We’re all professionals. We know what we need to do."

Taylor. Last year's top rookie rusher had 16 carries, 103 yards, one TD and an average of 6.4 yards. He did it behind an offensive line missing two starters. Indy needs Taylor to perform that way more consistently.

Deep throws. Yes, Wentz's limited mobility has forced more short throws the past two weeks. And, yes, two strong defenses forced Indy to throw underneath in Weeks 1 and 2. But Indy needs to go deep more often to open up the running game and score more points.

Alie-Cox. The former college basketball star caught three passes for 42 yards and two TDs. He came up big, too, when Indy needed him most by wrestling the ball away from a defender to give Indy a 17-point lead.

Jack Doyle. Though he hauled in a 24-yard reception Sunday, a back injury reduced the workload for Indy's most reliable tight end. His performance should improve as he gets healthier.

5 — Leonard has made it clear Indy wants 40-plus takeaways this season. The Colts are not on pace for that yet, but after forcing five in the past two games, they're starting to round into form.

The Colts' defense did what it needed to do by shutting down the short-handed and struggling Dolphins. Can they do it again, this time against one of the league's most dynamic offensive players? Indianapolis plays at Baltimore and 2019 MVP Lamar Jackson next Monday night. Offensively, Indy also must demonstrate its latest performance was not an aberration.