Prescott, Cowboys get out of funk, ease past Dolphins 31-6 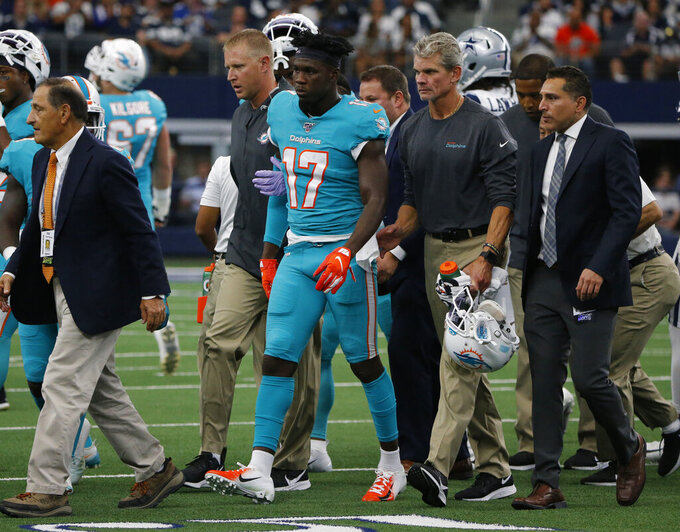 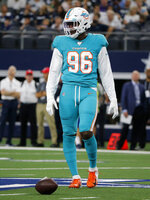 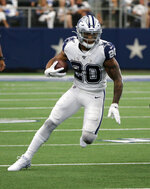 ARLINGTON, Texas (AP) — Dak Prescott and the Dallas Cowboys are still on a high-scoring roll, and the Miami Dolphins now have the worst scoring differential through three games since at least 1950 despite trying a younger quarterback.

It just took a half for those trends to kick in.

Prescott threw two touchdown passes to Amari Cooper before running for another score, and the Cowboys pulled out of a first-half funk as huge favorites in a 31-6 victory over the rebuilding Dolphins on Sunday.

"I mean, it's pro football, you know what I'm saying?" said Cooper, who had team highs of six catches and 88 yards. "They came out here prepared to play us. I think we were resilient."

One of Prescott's TD tosses to Cooper came before halftime, but the Dolphins had a great chance to lead at the break as 22-point underdogs when Kenyan Drake fumbled on first down from the Dallas 7-yard line in the final minute of the second quarter. DeMarcus Lawrence recovered to preserve a 10-6 lead.

Josh Rosen was 18 of 29 for 200 yards without a touchdown or interception in his first start for Miami, which went with him over 36-year-old Ryan Fitzpatrick after the first two blowouts.

Acquired in a trade when Arizona took Kyler Murray No. 1 overall a year after drafting Rosen 10th in the first round, the 22-year-old Rosen hit some big throws while moving Miami before stalling after halftime.

The rebuilding Dolphins are 0-3 for the first time since losing their first seven in 2011. They have been outscored 133-16 — that 117-point difference topping Oakland's 106 for the first three games in 1961.

"This very clearly is not a victory, but I think positives, yes," said Rosen, who was tested for a concussion in the first half but returned. "As an organization, we are just trying to like sort of find our identity. I don't think for one millisecond of the game did we give up."

Prescott fueled the first Dallas team in 41 years to win its first two games while rolling up at least 400 yards and at least 30 points each time. And while the Cowboys did it again while reaching 3-0 for the first time since 2008, it took them awhile to find that offensive form.

The second touchdown to Cooper was a 19-yarder that capped a 75-yard drive to open the second half, and came after a 74-yard TD toss to Randall Cobb was nullified by offsetting penalties.

Prescott ran 8 yards to cap the second straight TD drive to open the second half, pulling him within one of Roger Staubach's career club record of 20 rushing touchdowns in just his fourth season. Prescott was 19 of 32 for 246 yards with an interception on a poor decision.

"We're starting to just get unbelievable disbelief when Dak makes a poor decision, we're just not used to that," owner Jerry Jones said. "I'm proud that he's moving that ball around and came back out and really moved it around to a lot of different people."

The Dolphins outgained the Cowboys in the first half (216-204), but still have just one touchdown in three games after settling for two field goals from Jason Sanders in four trips inside the Dallas 30 before halftime.

Just before Drake's fumble, DeVante Parker dropped a throw that he easily could have turned into a touchdown. Parker earlier had a one-handed grab on a drive that ended in a 47-yard miss by Sanders.

"I don't come away feeling good about it at all," said Drake, who had 44 of just 77 yards rushing for an offense that was limited to 67 total yards after halftime. "At the end of the day, we had a few good drives, we left a lot of points off the board and we left a lot of yards on the field."

Ezekiel Elliott (125 yards on 19 carries) had his second straight 100-yard game after missing the entire preseason holding out for the $90 million extension he signed the day of the first full workout before the regular season.

Rookie Tony Pollard, who became the top option behind Elliott while the two-time rushing champion was gone, had his first 100-yard day (103 on 13 carries), clinching it on a 16-yard run for his first TD. It's the first time since 1998 for Dallas to have a pair of 100-yard rushers in a game.

Robert Quinn recorded a sack in his debut for Dallas after an offseason trade from Miami and a two-game suspension for violating the NFL's policy on performance-enhancers.

During his one season with the Dolphins and in previous years with the Rams, Quinn raised his fist during the national anthem to protest police brutality, social injustice and racial inequality. Colin Kaepernick sparked the debate in 2016 by kneeling during "The Star-Spangled Banner."

In keeping with what he had already done in two home preseason games, Quinn didn't raise his fist during the anthem before facing the Dolphins.

Cowboys owner Jerry Jones has been outspoken against such protests, including threatening to bench his players. Jones said after the game he never felt the need to address the issue with Quinn.

ANOTHER SCARE FOR HURNS

Miami receiver Allen Hurns had to be taken off the field after a jarring play at the home of the Cowboys, just as he did in the playoffs last season when he broke his ankle on a gruesome-looking play against Seattle when he played for Dallas. A woozy Hurns left the field on his own, but was ruled out in the first quarter with a concussion.

Miami cornerback Xavien Howard, still looking for his first interception after tying for the NFL lead with seven last season, was ejected in the fourth quarter following a personal-foul penalty.

Cowboys: At New Orleans next Sunday.