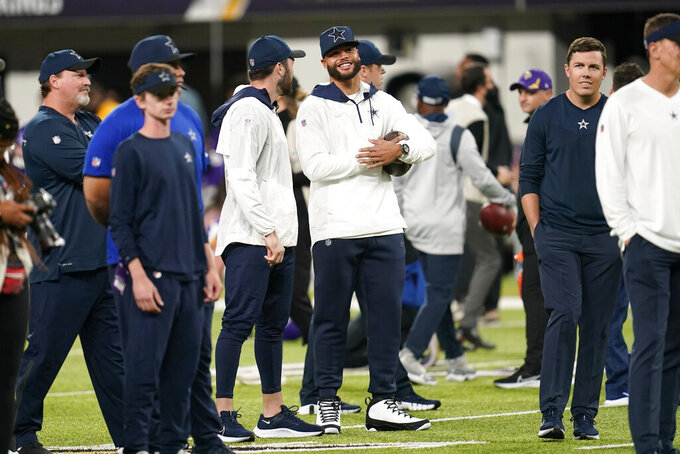 ARLINGTON, Texas (AP) — Von Miller won't be chasing whoever starts at quarterback for the Dallas Cowboys.

There's every reason to believe that quarterback will be Dak Prescott.

The Dallas star is expected to return after missing a game with a right calf strain, and Sunday he'll face a Denver pass rush making its first appearance since the three-time All-Pro Miller was traded to the Los Angeles Rams for draft picks.

“Be better. That’s my expectation going into everything,” Prescott said Thursday after being a full participant in practice. “I think I’ve had two good days of practice and continue to get better, put the final stamps on the game plan and go out there and be better than I was a couple of weeks ago against the Patriots.”

Prescott beat New England with a touchdown toss to CeeDee Lamb in overtime, the play on which the calf injury happened.

After an open week and plenty of chatter about whether Prescott would play, backup Cooper Rush helped secure Dallas' sixth straight victory since a season-opening loss with a TD pass in the final minute of a 20-16 win at Minnesota.

“It was huge,” Prescott said. “Obviously when you go in there with a backup quarterback in a hostile environment and he leads the team to a game-winning drive, I think that speaks volumes about not only him but our whole team in how we stuck together.”

The Broncos (4-4) say the Miller deal doesn't mean they've given up after unloading one of the best players in franchise history. If so, any playoff pursuit would get a big boost with a seventh consecutive victory in the series with the Cowboys.

“By no means is this a ‘Hey, we’re turning the tide and giving up on the season,’” safety Justin Simmons said. “You look at the tape against Washington, and guys played hard. We played really well, and I think the most important thing is we found a way to win the game. There wasn’t any throwing in the towel at that point either.”

As for Miller's replacements, Malik Reed had two sacks against Washington and Dre’Mont Jones got 1½ more, along with a blocked field goal. Stephen Weatherly, acquired Oct. 23 from Minnesota, also had a sack. Rookie Jonathon Cooper might ultimately be Miller’s successor as Denver’s top edge rusher.

“I have good confidence in those guys,” coach Vic Fangio said. “I think they all did a good job the other night. Especially with Stephen now being in his second week here, I expect him to pick up his play even more. We’re good there.”

The matchup features two of the NFL's four quarterbacks with completion rates above 70%. Prescott is at a league-best 73.1% to 70.4% for Bridgewater. Dallas coach Mike McCarthy was with Green Bay in 2016 when Bridgewater played for NFC North rival Minnesota and sustained the devastating knee injury that altered his career track.

“I remember when it happened, knowing people at that organization and just the impact and how it was felt speaks volumes to him as a person,” McCarthy said. “I know everywhere he’s been, everyone says nothing but great things about him. He’s got the moxie, the ‘it’ you look for in practices.”

Broncos WR Jerry Jeudy returned last week from a high right ankle sprain sustained in the opener and caught a team-high four passes for 39 yards in the 17-10 win over Washington. More importantly, he opened up the field for Bridgewater.

With seven-time Pro Bowl left tackle Tyron Smith expected to miss at least one game with an ankle injury sustained against the Vikings, undrafted second-year player Terence Steele will move from right tackle to fill in. La'el Collins is back in at right tackle after losing that job to Steele during a five-game suspension for violating the NFL's substance-abuse policy.

In the aftermath of the Miller trade, Broncos general manager George Paton said, “This is not a fire sale,” and Fangio declared, “There is no surrender.”

To prevent their playoff drought from reaching six seasons, the Broncos will have to break away from a pack of fellow .500 teams that include the Chiefs, Patriots and Browns. Their schedule is daunting: of their nine remaining games, only the Lions (0-8) and Eagles (3-5) have losing records; all three of their division road games are ahead along with a home game against the Chiefs, whom they haven’t beaten since 2015.