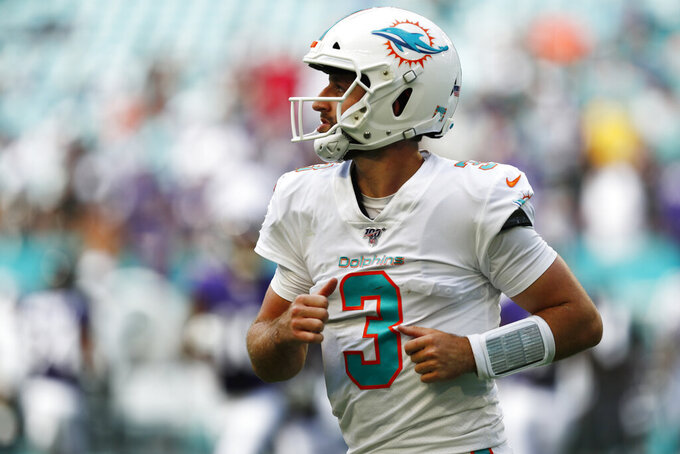 DAVIE, Fla. (AP) — Josh Rosen believes his aggressive playing style will help him give the Miami Dolphins the lift they badly need.

Rosen will make his first start at quarterback for Miami on Sunday at Dallas, and he takes over an offense that ranks last in the NFL in points and yards. The Dolphins were outscored 102-10 in two games with Ryan Fitzpatrick as the starting quarterback.

"Obviously right now we need a spark," Rosen said Friday, "and I'm going to try and provide that spark."

Rosen believes he can do it by being a bit of a gunslinger, as has been his nature since he played at UCLA. He also believes his style will work well in rookie coach Brian Flores' offense, which Rosen and his teammates are still learning.

"It's a really complex system," Rosen said. "I think it's only a matter of time before with enough game reps and practice reps, we'll get it down and slowly improve. I'm hoping and rooting for dramatic improvement, but I don't think we're going to go out and score 100 touchdowns and throw for a million yards. I think the key is just to keep grinding away."

Rosen will be without one offensive weapon at Dallas — receiver Albert Wilson was ruled out because of hip and calf injuries. Safety Reshad Jones was ruled out with an ankle injury.

Miami's quarterback switch was expected at some point, with the 36-year-old Fitzpatrick never considered a long-term solution. Rosen was a first-round draft pick by Arizona in 2018 and is regarded as a possible franchise quarterback.

"Is there potential for that? Yeah, obviously," Flores said. "But if you start thinking about five or 10 years from now, you're not really locked in on right now. That would be my advice to Josh."

Regardless of how Rosen plays, the rebuilding Dolphins are expected to use one of their three first-round picks in 2020 on a quarterback.

The Dolphins totaled 38 yards in the first three quarters of Sunday's 43-0 loss to New England. Flores said he decided to start Rosen this week because of the young QB's performance in practice Wednesday and Thursday.

"I think he maybe saw an opportunity and jumped at it in practice really well," Flores said. "His development is very important to me, so I never wanted to throw him in there too quickly. But I do think he's ready. He has shown me that he's ready to go."

Rosen said that since training camp began, he has focused on trying to improve, and not on any quarterback competition.

"In coach Flo's mind, there was a threshold which would be enough for him to name me the starter," Rosen said. "I just put my head down for the last couple months, and I guess I hit it."

Rosen went 3-10 starting as a rookie last year for the Cardinals, and became expendable in April when they used the No. 1 overall pick to draft Kyler Murray.