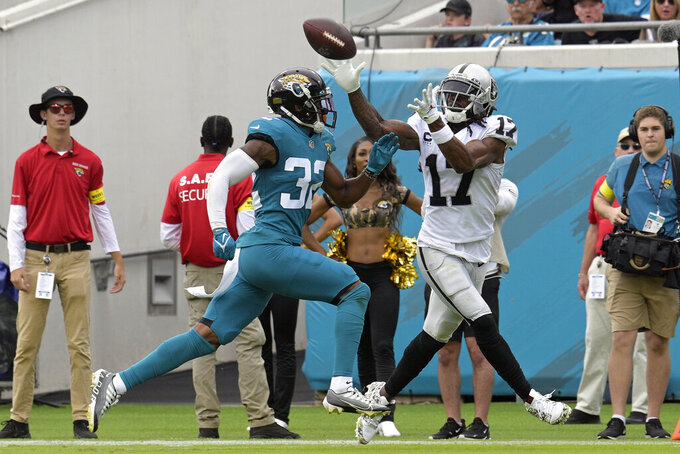 HENDERSON, Nev. (AP) — Derek Carr came off a career high in passing yards, extending a streak of 4,000-yard seasons to four in a row.

Davante Adams came off career highs in receptions and reception yards in Green Bay, where he established himself as arguably the NFL's best receiver.

Both were record-setting teammates at Fresno State and good friends, so when Las Vegas traded for Adams in March, the chemistry the two once shared figured to help the Raiders' offense becomes among the league's elite.

Entering Sunday's home game against the Indianapolis Colts, the Raiders are 2-6 and last in the AFC West. The expected vaunted offense has been stuck in neutral, averaging 22.9 points and tied for 14th with Dallas. It's not much different from the offense that averaged 22 points last season and ranked 18th.

Carr and Adams expressed their frustrations after Sunday's 27-20 loss at Jacksonville, with Adams questioning the play-calling. On Wednesday, Carr said coach Josh McDaniels pointed out shortcomings as well, adding it was up to the players to execute.

“Everybody’s going to try to create some division between the players and coaches just based off of different things that are said,” Adams said Wednesday. “But at the end of the day, it’s about making adjustments and everybody doing their job, and I think that’s where we have had some tough luck with this year is everybody doing their job at any given moment.”

Instead of picking up with his college buddy where they left off, Carr is on pace to register his lowest passing yardage total since 2017 and his lowest completion percentage since 2015. Adams is in danger of not reaching 100 catches for the first time since 2019.

“There's a lot that goes into it,” Carr said. "There are years I've played better football with worse numbers. The number part isn't the thing we look at. It's the efficiency of how you're running the offense.

“It doesn't matter until the end anyway. You're trying to win football games and see where that leads us.”

This is all new for Adams, who spent all eight of his NFL seasons with the Packers catching passes from Aaron Rodgers, the league MVP each of the past two years. They played in four NFC Championship games and in their final season together last year, Adams hauled in 123 receptions for 1,553 yards and 11 TDs.

Adams, however, is a bigger deep threat in Las Vegas than Green Bay. So even though he has just 48 receptions, Adams averages a career-best 13.7 yards a catch. He also has a league-leading seven touchdown receptions, on pace to challenge his career best of 18 two seasons ago.

This despite constant double teams, prompting Carr often to look at other targets. But Adams has shown he can beat whatever defenses throw at him, and part of the learning process for Carr has been to trust his receiver can still make the catch even with tight coverage.

“That’s why they paid me to come here and make plays,” Adams said. “At the end of the day, if we’re just going to concede and say, ‘Oh, they double-teamed Tae, so it’s forcing the ball to him if we threw it to him,’ then I’ve got no business being in this building because that’s what they’re going to do. So if you think that the only way I’m going to get the ball is when I’m singled up, then I’m going to have four catches on the year.”

Carr and Adams haven't quite been able to recreate what they had at Fresno State, but there have been signs here and there of those old times. As the Raiders enter the second half of their season, they need their quarterback-receiver combo to play their best football if they are to put together any kind of winning streak.

“We've shown it at times, but if we don't do it consistently, it's not going to end how we want it to,” Carr said of the offense as a whole. “We see basketball players, baseball players, football players with all this talent sometimes, but unless all the things are clicking all at once, the results aren't what you want.”