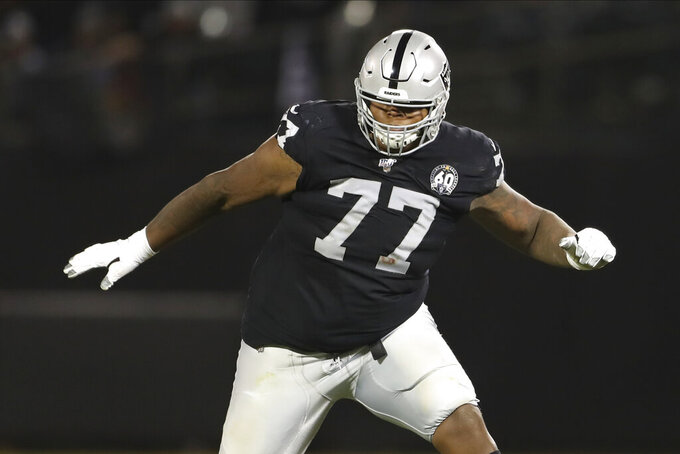 Las Vegas Raiders general manager Mike Mayock says the “jury is still out” on whether highly paid right tackle Trent Brown will be back in 2021 after being limited by injuries in his first two seasons with the team.

The Raiders gave Brown a $66 million, four-year contract in free agency in 2019 in Mayock’s first season as general manager to be the anchor of the line.

But after a strong start to his tenure, Brown has been hampered by various injuries and a bout with COVID-19. He managed to be healthy enough to play at least 10 snaps in just 14 of 32 games since joining the Raiders.

“When he’s healthy, in shape and ready to go, he’s as dominant as any tackle in football,” Mayock said Wednesday. “He proved that early in the 2019 season. Since then, it’s been kind of a roller coaster. What he needs to do more than anything is get himself in the best shape of his life and come out ready to prove that he is a dominant tackle in the National Football League. That’s all it takes. If Trent gets in shape and stays committed, there’s not a better talent out there.”

Brown, who is listed at 6-foot-8, 380 pounds, wasn’t in great shape when he arrived last season and missed most of training camp with a calf injury. He returned to play the opener but lasted just three snaps before injuring his other calf.

Brown played well in a victory at Kansas City in Week 5 before missing the next seven games after testing positive for COVID-19 and having a reported mishap with an IV that sent him to the hospital before a game at Cleveland.

He returned to play three games in December before missing the season finale with a knee injury.

Brown has salaries of $14 million for 2021 and $15.25 million in 2022 but none of that is guaranteed and the Raiders could trade or cut him without any impact on the salary cap.

“We believe in the talent of that player,” Mayock said. “There would be nothing finer than you have Trent Brown at right tackle protecting Derek Carr next year. But the jury’s out and we still have to make some decisions on our roster in general.”

The Raiders could have other changes coming on the offensive line with the team expected to release starting right guard Gabe Jackson as well in order to save more than $9 million in salary cap room.

But Mayock once again gave public support for Carr to remain at quarterback despite speculation about possible trades for stars like DeShaun Watson or Russell Wilson.

Carr set career highs last season with 4,103 yards passing and a 101.4 passer rating to go along with 27 TD passes. But he also ranked tied for fourth in the league with the most turnovers with 17 as the Raiders collapsed down the stretch for a second straight season.

The Raiders lost five of six following a 6-4 start in 2019 and went 2-5 last season after having a 6-3 record through Week 10. The Raiders have had one winning record in the past 18 seasons.

Las Vegas fired defensive coordinator Paul Guenther during that collapse and brought on Gus Bradley to improve a unit that has ranked among the worst in the league in coach Jon Gruden’s three seasons.

The offense ranked 10th in the league in scoring at 27.1 points per game and Mayock hopes to build on that with Carr.

“I think he’s one of the top quarterbacks in the NFL and we couldn’t be happier with him,” Mayock said. “We evaluate every position every year. I have no idea who might call me or who may not call me. So you have to do the evaluation both on your own player and every other player in the league. You got to stack your boards and understand what league value is all around the league. And we do that. I think Jon and I would both stand shoulder to shoulder and pound the table for Derek Carr.”