Raiders run away late from Texans for rare lopsided win 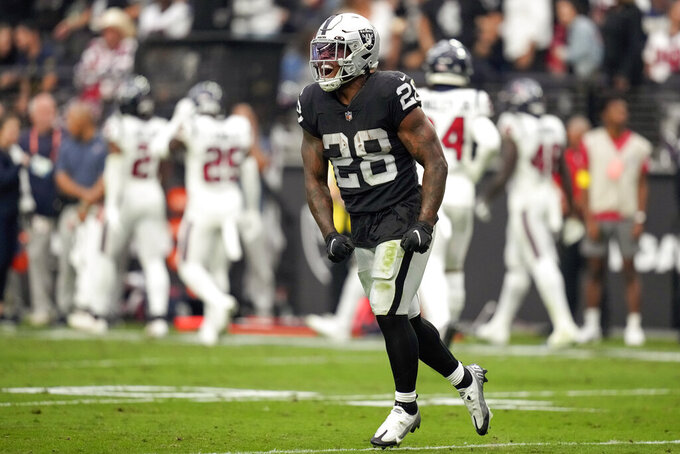 Las Vegas Raiders running back Josh Jacobs celebrates his touchdown during the second half of an NFL football game against the Houston Texans, Sunday, Oct. 23, 2022, in Las Vegas. (AP Photo/John Locher)

After too many games early in the season when the Las Vegas Raiders couldn't seem to make a big play at the right time in the fourth quarter, everything came together against Houston.

With Josh Jacobs and an improved offensive line dominating the ground game, Derek Carr making a few key throws and the defense delivering down the stretch, the Raiders turned a three-point deficit into a rare lopsided win, 38-20 over the Texans on Sunday.

The Raiders (2-4) became the first team in eight years to win a game they trailed after three quarters by at least 18 points. It also marked a league-low fourth time since Carr arrived in 2014 that the Raiders won a game by more than 14 points.

It was just what Las Vegas needed after four one-score losses before the bye week left it mired at the bottom of the AFC standings.

Now Las Vegas will try to carry that over and go on a run during the soft part of its schedule. The next four opponents have a combined record of 9-18-1.

The Raiders rode another big performance by Jacobs for four consecutive touchdown drives of at least 75 yards. They kept Houston off the scoreboard on three fourth-quarter possessions and put the game away with Duron Harmon's pick-6.

“Really towards the end of the second quarter and on, we stopped beating ourselves and we just executed,” Carr said.

Run game. Jacobs is on one of the best three-game stretches in franchise history with 441 yards rushing and six TDs. This is just the eighth time since the merger a back has run for at least 140 yards and a score in three straight games. The Raiders are averaging 5.43 yards per carry for the best mark through six games in franchise history and 2.1 yards better than the average at this point last season.

Special teams penalties. The Raiders committed three special teams penalties in the first half, including holding calls against Trent Sieg and Clelin Ferrell when Las Vegas was punting. Luke Masterson also was called for holding on a kickoff, with all three infractions impacting field position.

Offensive line. The biggest question on offense coming into the season for the Raiders was the offensive line and those didn't lessen when McDaniels spent most of the first few weeks shuffling combinations. After allowing six sacks in the opener, the Raiders have allowed just seven in the last five games. The move of rookie Dylan Parham to left guard alongside left tackle Kolton Miller has been a big help. Las Vegas allowed just one sack this week and created many holes for Jacobs.

Pass rush. While Maxx Crosby continues to generate consistent pressure, the Raiders are having a tough time bringing quarterbacks down. The only sack on Sunday came when Ferrell and Chandler Jones split one on the final play of the first half to give both of them their first half-sack of the season. Las Vegas' 1.5 sacks per game are tied for the second fewest in the NFL.

The Raiders came out of the game healthy. T Jermaine Eluemunor left with an ankle injury in the first quarter but later returned. ... S Matthias Farley left with a back injury in the third quarter and a cramp in the fourth.

3. The Raiders got into the red zone three times and turned them all into TDs by Jacobs in a pleasant change for an offense that has struggled to finish off drives in recent years. This marked the third time in the past five seasons that the Raiders had a perfect day in the red zone with at least three trips, also doing it in a win at Kansas City in 2020 and a home loss to the Chiefs in 2018.

Las Vegas visits New Orleans on Sunday to start a two-game Eastern swing. The Raiders will spend the week in Florida after the game before finishing the trip at Jacksonville on Nov. 6.