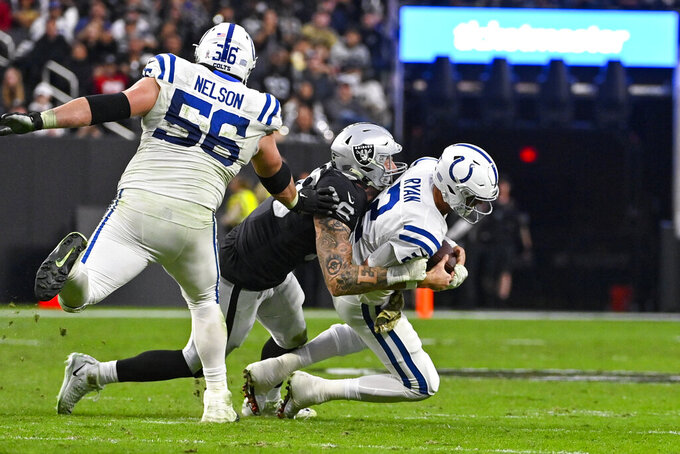 HENDERSON, Nev. (AP) — When the Las Vegas Raiders acquired Chandler Jones in March, the move was expected to relieve the pass-rushing stress from Maxx Crosby and force opposing offenses to pay attention to both defensive ends.

Crosby has still produced for the Raiders, but he has been forced to constantly find his way through double teams and other roadblocks because Jones hasn't provided enough pressure on the other side.

That's part of why the Raiders' pass rush has been nearly nonexistent. They are last in the NFL with 3.24% of sacks coming on opposing passing attempts. And that's with Crosby tied for 10th in the league with seven sacks; the rest of the team has three combined.

Jones has half a sack, just a season after he registered 10 1/2, with five coming in the season opener against the Tennessee Titans, accounting for nearly half his total.

Still, the Raiders were expecting more production from Jones, but it's not all on him. The Raiders haven't generated pressure from their interior line, either, and it's led to opposing quarterbacks having more than ample time to find open receivers.

The result? Those quarterbacks have an average passer rating of a league-high 107.0 against Las Vegas.

To put that into perspective, Kansas City Chiefs star Patrick Mahomes is the NFL's career leader with a 105.8 rating.

“Rushing and cover works together,” linebacker Denzel Perryman said. “If the quarterback has all the time in the world back there to throw, the rush has got to get home. If the quarterback gets the ball out quick and the rush can't get there, that means we've got to cover longer.”

Sunday's 25-20 loss to the Indianapolis Colts was the perfect example of Las Vegas' struggles. Indianapolis entered the game having given up 35 sacks, including nine the week before against the New England Patriots.

The Raiders deactivated three interior defensive linemen, which coach Josh McDaniels later intimated had to do with disciplinary reasons. The move made Las Vegas short-handed going into that game.

It showed, even with Colts interim coach Jeff Saturday chose start veteran QB Matt Ryan, a player who doesn't remind anyone of Mahomes or Kyler Murray when it comes to his ability to scramble. But Ryan was sacked just once — by Crosby, of course — and later burned the Raiders with a career-long 39-yard run to set up the winning touchdown.

“I thought they mixed in some different things relative to the way they were throwing the ball," McDaniels said. "The (run-pass option) stuff, when you throw those, you're kind of playing run while they’re throwing it. Those are some things that obviously your pass rush is a little limited there.

"I thought they mixed in some of the quick game stuff that the ball was coming out pretty quickly, which usually limits the rush and the production. We have to do better on the downs that we can do better on, if we can create some third-and-longs, some obvious passing situations to be able to provide more rush.”

The Raiders took a step to improve their play up front by signing tackle Jerry Tillery, a 2019 first-round draft pick who was with the Los Angeles Chargers before being waived Monday. He had 4 1/2 sacks last season, but only one through seven games this year.

Maybe Tillery will help Las Vegas improve its pass rush — it would be difficult for it to be worse.

“Sometimes (sacks) come in bunches, and sometimes there’s streaks where they don’t happen,” McDaniels said. "I’d say, right now, we’re in one of those streaks for whatever reason. There have been opportunities. It’s not like we haven’t had chances.

"How do we improve that collectively, and adding Tillery, does that help us? Yeah, hopefully. We’ll see. But that was the intent on it, is maybe we can add another guy that has some disruption inside, maybe people pay a little less attention to our ends. And that’s a choice that obviously every offense is going to need to make.”

Perryman, who did not play against the Colts because of hip and rib injuries, was limited in practice Wednesday. Wide receiver Davante Adams (abdomen) also was limited, as were offensive tackle Kolton Miller (shoulder and abdomen), linebacker Luke Masterson (ribs) and cornerback Sam Webb (knee). Running back Ameer Abdullah didn't practice because of illness, and running back Brandon Bolden and cornerback Rock Ya-Sin missed for personal reasons.