Raiders' win at KC shows signs of progress under Gruden 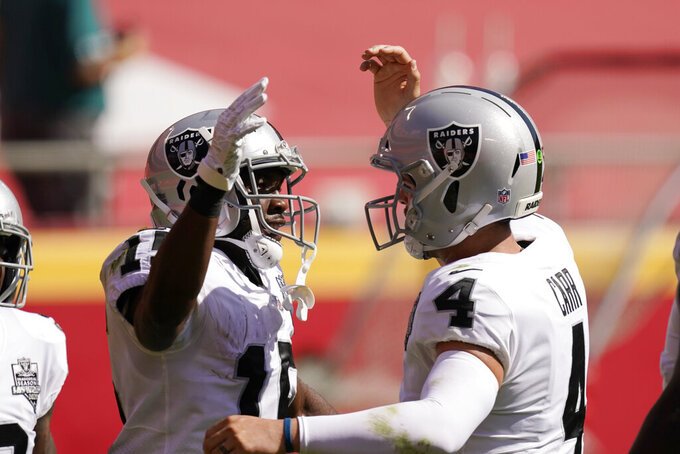 The Raiders have been looking up at Patrick Mahomes and the Kansas City Chiefs ever since Jon Gruden returned as coach in 2018.

While the Chiefs have been lighting scoreboards, dominating the division and winning a Super Bowl last season, Gruden has tried his best to put together a team that could hang with Kansas City.

The Raiders proved able to do that for at least one day.

With Derek Carr connecting on deep passes like he never has before and a strong second-half defensive performance against Mahomes, the Raiders beat the Chiefs 40-32 on Sunday to end a seven-game losing streak at Kansas City.

“We needed to beat the Chiefs because they’re in our way,” Gruden said Monday. “We want what they have. So, it’s time we went out there and did a better job of taking care of the football, which we finally did, and then secondly we hung in there and weathered the storm and found a way to win.”

The Raiders (3-2) now head into their off week in a much better state of mind than they a week ago after losing back-to-back games to New England and Buffalo. That prompted Carr to say he was “sick of losing.”

Now the talk around the Raiders is about whether they have the ingredients to contend for a playoff spot in the AFC.

“I think we’re back,” Carr said. “I think we’re back a little bit. Of course, that’ll get posted somewhere, but I hope it doesn’t. I hope they get my whole quote and say, ‘It’s the world champs, man.’ What we were able to do today, lose two in a row, go to play the world champs and be able to score some points and our defense getting the stops. ... We have to be able to win football games against these guys to make a rivalry. We hadn’t done that in a long time.”

Deep passing game. Carr once again showed a willingness to go deep, connecting on 3 of 4 passes that went at least 20 yards downfield in the first half alone for 177 yards and two TDs, according to NFL NextGen stats. He had a 72-yard TD to Henry Ruggs III and a 59-yarder to Nelson Agholor, marking the first time since 1996 the Raiders scored on two TD passes of at least 50 yards in the same game. That was more yards on deep throws in one half than Carr had in any game over the past five seasons.

Defending tight ends. Finding faults after the Raiders' most consequential win in years might be nitpicking but if there’s something that could use improvement it would be doing a better job defending tight ends. The Raiders had done well in that area the first four weeks, but hadn’t faced many of the top receiving threats at the position. Kansas City’s Travis Kelce picked them apart with eight catches for 108 yards and a TD.

Praising the defense in a game when the unit allowed 32 points might be unusual. But coordinator Paul Guenther’s much-maligned squad delivered during a key stretch of the game. After allowing TDs on three straight drives to fall behind 21-10, the defense buckled down. On Kansas City’s next six possessions, Las Vegas forced four punts, got one interception and allowed a field goal, helping turn an 11-point deficit into a 16-point lead. The Chiefs averaged 3.42 yards per play during that stretch and Mahomes was held to a 33.1 rating.

Arrowhead curse. The Raiders had lost seven straight games at Arrowhead Stadium and few of them were close. The Chiefs outscored the Raiders by 17.6 points per game in that stretch. Carr started six of those games and his 63.2 rating in those starts ranked 118th out of 121 quarterbacks who have made at least five starts in a specific stadium since 2014.

The Raiders got out of the game fairly healthy, with DB LaMarcus Joyner leaving briefly with a hamstring injury and DE Carl Nassib injuring his foot. Gruden hopes the Raiders can get G Richie Incognito, WR Bryan Edwards and DT Maliek Collins back after the bye.

203 — Carr did most of his damage passing on third down, gaining 203 of his 347 yards on that down. The biggest play was the 72-yard TD to Ruggs. He also had a 23-yarder to Darren Waller on the go-ahead drive in the second half and a 42-yarder on third-and-18 to Hunter Renfrow to set up the field goal that put Las Vegas up by nine. It was the second- most yards gained on third down in the past two seasons, trailing Carr’s own 204 in the 2019 finale at Denver.

The Raiders have a week off before returning to host Tampa Bay on Oct. 25.