Rams, Ravens have 4-game streaks in opposite directions 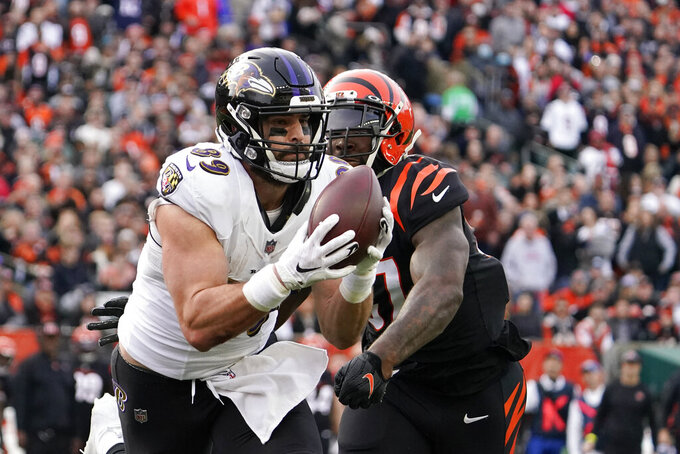 BETTING LINE: Rams by 3½, according to FanDuel SportsBook.

TURNOVER DIFFERENTIAL: Rams plus-3; Ravens minus-10.

RAMS PLAYER TO WATCH: RB Sony Michel has come on strong during their four-game winning streak. He excels after contact with his hard-nosed running style, but the Rams need to keep him healthy this week. With Darrell Henderson on injured reserve, they might head into Baltimore with two running backs recently returned from major injuries as his only backups: rookie Jake Funk and 2020 leading rusher Cam Akers, who is highly unlikely to play at all.

RAVENS PLAYER TO WATCH: Baltimore activated CB Jimmy Smith from the reserve/COVID-19 list this week. The Ravens need as much help as possible for a decimated secondary that allowed Cincinnati's Joe Burrow to pass for 525 yards last week.

KEY MATCHUP: The Los Angeles secondary vs. whoever Baltimore's QB is. Lamar Jackson could be back for the Ravens after missing two games with an ankle injury. Baltimore backup Tyler Huntley also returned from the COVID-19 list this week. The Ravens allowed 72 points over the past two weeks, and it's likely they'll have a hard time stopping the Rams as well, so Baltimore may need to score quite a bit to win.

KEY INJURIES: Rams NT Greg Gaines had surgery on his hand this week, but is expected to play wearing a cast. ... S Taylor Rapp popped up on the injury report this week with a shoulder problem. He is the Rams’ second-leading tackler. ... C Brian Allen is expected to play despite a knee injury that forced him out of last week’s win at Minnesota. ... Jackson returned to practice this week for the Ravens but was limited, at least at first. ... Several Baltimore defensive players were activated from the COVID-19 list, including LBs Tyus Bowser and Justin Houston and S Geno Stone.

SERIES NOTES: The last time these teams met, the Ravens routed the Rams behind five touchdown passes by Jackson. ... Baltimore has won four straight in the series and is 3-0 against the Rams under John Harbaugh.

STATS AND STUFF: The Rams can clinch the NFC West with a win and an Arizona loss. ... Cooper Kupp of the Rams has 1,734 yards receiving, which puts him seventh on the NFL's single-season list. He could pass several people ahead of him this weekend. Calvin Johnson (1,964) holds the record, followed by Julio Jones (1,871), Jerry Rice (1,848), Antonio Brown (1,834), Isaac Bruce (1,781) and Charlie Hennigan (1,746). ... Kupp's 132 receptions are fifth on the single-season list, behind Jones (136), Brown (136), Marvin Harrison (143) and Michael Thomas (149). ... Los Angeles DL Aaron Donald has 12 sacks this season. He's the only player in the league with at least 11 in each of the past five seasons. ... Baltimore has lost four straight, equaling its longest skid under Harbaugh. ... Ravens TE Mark Andrews has 1,187 yards receiving, 14 shy of the franchise record set by Michael Jackson in 1996. Andrews has at least 100 yards receiving and a touchdown in three straight games, tying Jimmy Graham in 2013 for the longest streak by a tight end in league history.

FANTASY TIP: It's obviously a promising week to have Kupp, and given the state of Baltimore's secondary, Odell Beckham Jr. could be due for a big day as well.