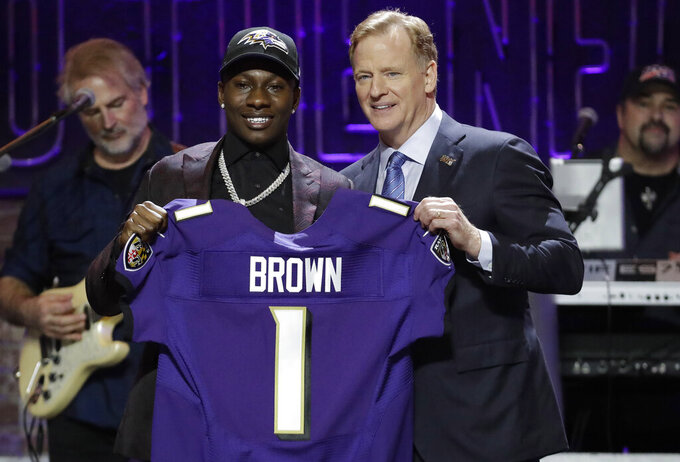 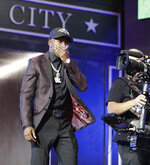 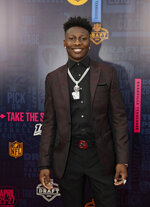 OWINGS MILLS, Md. (AP) — Baltimore Ravens rookie general manager Eric DeCosta waited his entire life to make a selection in the NFL draft, so delaying the moment for a few extra minutes wasn't much of a hardship.

When the wait was over, DeCosta selected wide receiver Marquise Brown of Oklahoma.

And by trading the 22nd overall pick to the Eagles on Thursday night, DeCosta netted a couple of extra draft choices before selecting Brown at No. 25 overall.

After waiting 2½ hours to get on the clock, DeCosta swapped first-rounders with Philadelphia and received the Eagles' fourth- and sixth-round picks. Then DeCosta took the cousin of NFL wide receiver Antonio Brown. A standout in his own right, Marquise Brown scored 17 touchdowns in two years with the Sooners and had a pair of 1,000-yard seasons.

"What are the chances a guy who had to walk to work and fight his way just to get to junior college ends up being the first receiver taken?" Oklahoma coach Lincoln Riley said. "I'm thrilled for him and his opportunity. He's going to bring a lot to the Baltimore Ravens. Their fans will love his explosiveness, which we really came to appreciate the last couple of years at Oklahoma."

Brown fills a need for Baltimore after the offseason departure of wideouts John Brown and Michael Crabtree. The 5-foot-10, 170-pounder — nicknamed "Hollywood" in part because he grew up in Hollywood, Florida — Brown made a strong impression on DeCosta during a visit to the team complex last week.

The relationship gets a bit more serious now.

"Him being my first pick was emotional for both of us, the stress that he and I will be forever linked," DeCosta said.

DeCosta replaced Ozzie Newsome, who had the final say in every Ravens draft since the team moved from Cleveland in 1996. After working closely with Newsome for more than two decades, DeCosta took over in January. He had Newsome as an adviser over the past few weeks and Newsome was in the draft room when it came time for Baltimore to make its pick.

Stealing a page from his predecessor, DeCosta chose to stockpile picks for the later rounds. As it stands now, the Ravens have two selections in the third round, three in the fourth, one fifth-rounder and a trio of sixth-round choices.

"I was a little bit nervous that Philly would take him," DeCosta said of the first-round swap. "It's a calculated risk. You know we like to make trades. It made sense to roll the dice a little bit, so we did."

Brown waited anxiously between the 22nd and 25th picks.

"When they traded back I got a little nervous, but everything worked out," he said.

He also signed quarterback Robert Griffin III to a two-year deal that keeps him as a backup to Lamar Jackson.

Drafted with the 32nd overall pick last year, Jackson stepped in for an injured Joe Flacco in mid-November and led the Ravens to the AFC North title. Newsome gave up a 2019 second-round pick to Philadelphia to get Jackson, so Baltimore's next selection isn't slated to come until the third round at 85th overall.

DeCosta came into the draft looking to find a wide receiver, a pass rusher and an inside offensive lineman. He checked one off that list by taking Brown, who averaged 18.3 yards per catch at Oklahoma.

"He's got a certain toughness about him and he's a playmaker," coach John Harbaugh said. "He's a perfect fit for what we're trying to do offensively."