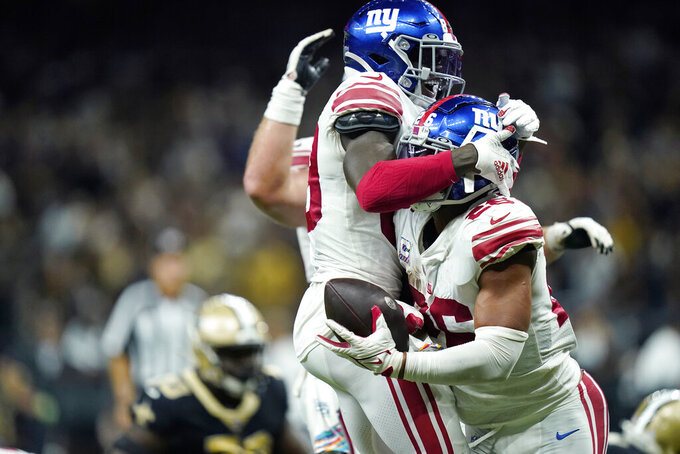 EAST RUTHERFORD, N.J. (AP) — All the problems first-round draft pick Kadarius Toney had in training camp and the early part of the season seem forgotten.

The wide receiver out of Florida opened a lot of eyes this past weekend in catching a career-best five passes for 74 yards. The numbers really aren't spectacular, but what Toney showed on the field was.

While he did not score or have a play more than 21 yards, the 22-year-old wideout is quick and elusive. He can make defenders miss, and with his speed he can turn a short play into a major gain or score quickly.

The one play that stood out was a third-and-18 at the Giants 19 late in the first quarter.

Toney ran a short 5-yard hook, caught a pass from Daniel Jones, cut to the middle, got a block from guard Will Hernandez, broke toward the right sideline, cut inside at the hashmark, cut outside again and spun forward to reach the yard to gain.

It was like watching a punt returner making moves to beat the downfield coverage, and it extended a drive when the offense needed it.

Toney said the art of avoiding tackles is instinctive.

“The process is really just more of, if he goes left, I’ve got to go right,” Toney said Friday after the Giants (1-3) held their last practice for Sunday's game in Dallas against the NFC East leading Cowboys (3-1). “It’s just kind of like playing freeze tag, something like that. It’s that kind of feel when you’re out there.”

Toney smiled while discussing the play, but his short tenure with the Giants hasn't always been so pleasant.

The 20th player taken overall in the draft, Toney missed most of the offseason workouts with a foot injury. When he reported to training camp in late July, he tested positive for COVID-19 and later developed a hamstring problem.

Toney has not missed a game but he had little or no contributions. He caught two passes for minus-2 yards in the opener, playing five plays. He was on the field for 19 plays against Washington and wasn't targeted.

There was a point in the game when he and coach Joe Judge had a disagreement on the sideline.

Things picked up against Atlanta when Sterling Shepard and Darius Slayton sustained hamstring injuries in the first half. Toney got 49 plays, catching two of the three passes directed his way for 16 yards.

Against the Saints, Toney was on the field for 49 plays and was targeted nine times, including a drop on a slant. He also had a trick play called on which he was going to throw a pass on an end around. Nothing was open so he had a short run, electing not to force something.

Jones said Toney had a great week of practice leading up to the New Orleans game.

“I think you can see how dangerous he can be with the ball in his hands and making guys miss, staying on his feet, extending plays,” Jones said. “I’ve got to continue to focus on doing that, getting him the ball.”

“When you add those guys – Kadarius and John — and they’ve proved they can be effective and make big plays down the field, that certainly gets the defense’s attention,” Garrett said.

NOTES: The Giants ruled out four players for Sunday's game. Slayton, Shepard and guard Ben Bredeson will miss their second straight with hamstring injuries. Safety Jabrill Peppers, who was hurt against the Saints, also will miss the game with a hamstring problem.