Rivers reflects on potential end of 16 seasons with Chargers 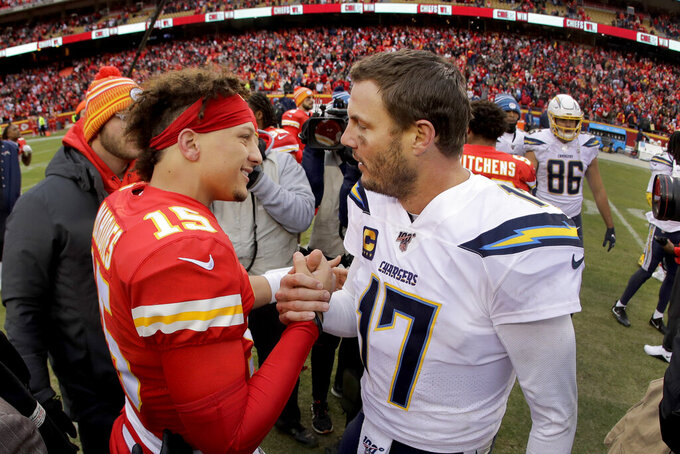 KANSAS CITY, Mo. (AP) — If the final pass that Philip Rivers threw for the Los Angeles Chargers occurred Sunday, it certainly was a fitting one.

After he was dragged all over the field by the Kansas City Chiefs, the veteran quarterback heaved a no-hope throw over the middle in a game essentially over. Daniel Sorensen plucked the wobbly ball out of the air for the Chiefs' second interception of the game, clinching their 31-21 victory and sending Rivers trudging to to the locker room in defeat.

Rivers, whose four-year, $83.25 million contract expires after this season, finished with 281 yards passing and two TDs in his 224th consecutive regular-season start. But it was a game that also summed up his 16-year career in San Diego and Los Angeles: stretches of tenacity and sheer brilliance interrupted by questionable decisions and inopportune mistakes.

“There have been times even at the house I've been a little bit emotional, thinking about the last bus ride. Those things I have gotten to at times,” Rivers said. “But I also think, 'Don't let it ruin the moment.' Again, be in the present. That was my whole thing about today was just play, and I think we did that. It wasn't enough. Ultimately it wasn't enough.”

Rivers made plenty of big throws, but he also was a big reason why the Chargers lost for the 11th time in 12 games against Kansas City. They failed to convert a pair of fourth downs, he was sacked three times, and he threw an interception on a jump ball into the end zone before his second pick as the final seconds ticked away.

The two interceptions gave him 20 on the season, second only to the Buccaneers' Jameis Winston for most in the NFL. It was the fourth time Rivers has thrown at least 18 picks in a season, a number that casts a a bit of gloom over nearly 400 touchdown passes, nearly 60,000 yards passing and six trips to the postseason.

There won't be any playoffs for the Chargers (5-11) this season, though. Injuries and misfortune brought low a team that won 12 games last year, and left Rivers with a potentially ruinous ending to his career with the franchise.

“It's not something I'm thinking much about right now,” said Chargers coach Anthony Lynn, when asked about the future of the quarterback position in Los Angeles. “I feel for the guys in the locker room, staff. We lost a hard-fought game. When the dust settles, we will evaluate everyone and we will see who we are bringing back.”

Rivers made it clear he intends to play next season, even if that means putting on a different uniform.

“That would be weird,” he acknowledged. “But I think I'll like the people at those places, too, probably. You'd quickly get adapted. Again, it's such an unknown — I'm not making any predictions by any means. I think it'll be a hard adjustment, but maybe not as hard as I think because this is the only place I've ever known. A lot of people have come through this place. I just haven't left.”

One of them is tight end Hunter Henry, whose career has taken off in part because of Rivers.

“Had a tremendous career,” Henry said. "To come into a locker room as a rookie and have a guy like that helped me progress so much faster, I can't say enough great words about an ultimate competitor, ultimate leader. It's been a pleasure to play with a guy like that. Hopefully I can do it some more.”

Rivers certainly hasn't lost that boyish enthusiasm for the game.

On the very first play Sunday, the veteran gunslinger was chased and dropped by Chiefs defensive tackle Chris Jones as he completed a pass to Keenan Allen. Rivers and Jones wound up tangled, and the two well-known trash-talkers spent about 30 seconds trading barbs — so much so that Rivers had to run to the line of scrimmage to run the next play.

Rivers got into it with several Chiefs players throughout the game, and that came after he had called over security during pregame warm-ups to point out some Kansas City fans that were giving him a particularly tough time.

“It's still there,” Rivers said of his passion for the game. “A year like this, it can drain you a little, and beat you up, but yeah, it's still there. There's nothing like it, competing at this level, living the dream. Being in a situation where you're 5-10, I was asked earlier this week, 'What's your motivation?' Shoot, the motivation? Being 38 years old and getting to play the Chiefs at this place? Are you kidding me? It doesn't matter what your record is. That tells me I've still got some juice left.”