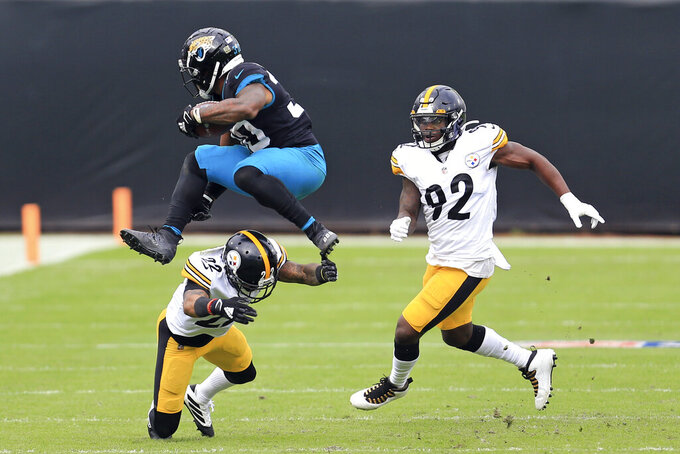 JACKSONVILLE, Fla. (AP) — Jacksonville’s next regime won’t have to start from scratch. The Jaguars have a surprising number of building blocks in place, none more impressive this season than running back James Robinson.

The undrafted rookie from Illinois State has been the team’s top newcomer and most consistent player, and it’s not even close.

Robinson had 968 yards rushing through 12 games, the third-most in the NFL behind Tennessee’s Derrick Henry and Minnesota’s Dalvin Cook.

Robinson and Henry, who will be on opposite sidelines Sunday when the skidding Jaguars (1-11) host the AFC South-leading Titans (8-4), are two of three players to top 100 yards from scrimmage in at least seven games this season.

“James is the real deal,” Jaguars quarterback Mike Glennon said. “He’s a legit starting running back in the NFL. The thing I love about James is he never has lost yards. He’s always falling forward. He turns what could be second-and-10s into second-and-6s, and those add up over time.

“He keeps the game in manageable situations, and he’s a special talent. How he fell to out of the draft, I have no clue. We are lucky to have him because he’s one of the better backs in the League.”

The ultra-quiet Robinson leads all rookies in rushing and yards from scrimmage (1,278), and he ranks second in total touchdowns (nine). He needs 32 yards against the Titans to become the first undrafted rookie in NFL history to reach 1,000 yards rushing through the first 14 weeks of a season.

Only Lindsay made the Pro Bowl, and none of the three were named NFL Offensive Rookie of the Year.

Robinson has an outside shot at both, especially if voters consider his durability and consistency.

“He’s almost not human the way he, week in and week out, is able to perform and keep his body healthy,” Jaguars receiver and fellow rookie Collin Johnson said. “It’s just impressive and motivating, too, seeing an undrafted guy come in here and put up the numbers he’s doing and being such a good teammate.

“It’s motivating. He’s a great guy for our locker room and just a beast.”

And a clear part of the franchise’s future.

Owner Shad Khan is searching for a new general manager after firing Dave Caldwell last month. Caldwell assembled much of Jacksonville’s roster over the past eight seasons, and although he had plenty of misses, the Jaguars have enough pieces in place that his replacement won’t have a complete rebuild on his hands.

He has six consecutive games with more than 90 yards from scrimmage, the longest active streak in the NFL.

“I’m not worried about him slowing down,” said coach Doug Marrone, who also raved about Robinson’s work ethic and demeanor. "I’ve had players where I knew when they came into the building, I knew what type of day it was going to be, meaning, ‘This guy’s ready to go, he’s focused. (Or), oh, shoot, I’m going to have to kick him in the butt and get him going.’