On the run: Bulked-up Vikings 'D' still vulnerable on ground 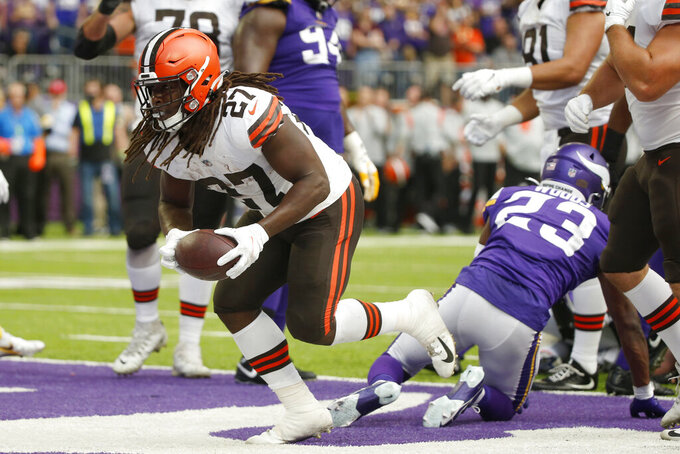 Cleveland Browns running back Kareem Hunt (27) scores on a 1-yard touchdown run ahead of Minnesota Vikings free safety Xavier Woods (23) during the first half of an NFL football game, Sunday, Oct. 3, 2021, in Minneapolis. (AP Photo/Bruce Kluckhohn)

MINNEAPOLIS (AP) — The Minnesota Vikings made a major investment in their defense for this year, badly needing better fortification against the run.

Most of their newcomers have played well. The results haven't yet followed suit.

The Vikings allowed a season-high 184 rushing yards in their 14-7 loss to the Browns on Sunday and rank fifth-worst in the NFL with an average of 4.8 yards allowed per rush.

“Did we get pushed around today? Probably, but I’m telling you now, they know how to run the football, and those two backs run hard,” coach Mike Zimmer said, referring to Cleveland's league-leading tandem of Nick Chubb and Kareem Hunt. “I’m not discouraged one bit about the lack of stopping the run. At the end of the day, they scored one touchdown against us.”

Browns coach Kevin Stefanski has taken the same overarching strategy the Vikings have employed under Zimmer and has been enjoying much better success with it since he took the Cleveland job last year.

“I’ve been doing this 27 years. I know good teams, and I know bad teams. I know this team has a chance to be pretty darn good,” Zimmer said. “We may not look like it right now because we’re 1-3, but even like Kevin said to me before the game, you got a really good football team here.”

New defensive tackles Dalvin Tomlinson and Michael Pierce have given the Vikings a boost in the middle of the line, but linebacker Anthony Barr has yet to play because of a knee injury, an absence that hasn't helped the matter. Whether it's scheme, talent or a combination of both, the Vikings have surrendered too much yardage on the ground, a trend that started last season.

The Browns only had three first downs by rushing after halftime, and two of them were during a drive that ended in a punt, but those gains still made a difference in draining the clock.

“I thought overall, we played pretty well. It just comes down to a couple plays,” said cornerback Patrick Peterson, whose new team has lost to opponents with a combined 10-2 record. “Just keep fighting, man, and understand that we're right there.”

The Vikings have allowed a league-most 35 points inside of the 2-minute warning in either half, according to Sportradar. All of those scores have been surrendered in the second quarter, leaving no bigger reason for their three losses than this troubling pattern of crunch-time lapses.

A 30-yard run by Hunt on third-and-20 that set up a field goal before halftime for the Browns was the biggest gut punch.

DE Everson Griffen has two sacks for a total of 20 lost yards and four quarterback hits in three games in his return to the Vikings in a reserve role, providing a valuable complement to Danielle Hunter while starter D.J. Wonnum has made little impact. Griffen's sack against the Browns was made possible by Hunter, on fourth-and-4 from the 6-yard line early in the second quarter.

“He held him up in the pocket, and I had a good rush on the back side and I finished him off,” Griffen said. “We've just got to figure out how to get more of them and how to stop the run, too.”

LT Rashod Hill has had some daunting blocking assignments, particularly considering he was slated for a backup role, but he had trouble with Browns star Myles Garrett. First-round draft pick Christian Darrisaw was active for the first time on Sunday, finally at full speed after being hampered by a groin injury all preseason, and could be in the lineup at LT sooner than later.

RB Dalvin Cook wasn't much of a factor in his return from a sprained ankle, but neither was backup Alexander Mattison. Cook was on the sideline for four straight possessions in the second half because he was “a little gimpy,” Zimmer said, but Cook came back for the final two drives.

Pierce started the game despite an elbow injury that had him listed as questionable, but he was sidelined after aggravating it in the second quarter and scheduled for an MRI exam.

CB Cameron Dantzler, who played almost the entire game after the departure of Bashaud Breeland due to what the team announced as an illness, was placed on the COVID-19 reserve list on Monday.

6.13: Yards per play allowed by the Vikings, the fifth most in the league.

The Vikings have a well-timed visit from one of the NFL's two winless teams, division rival Detroit, this Sunday. The Lions host the rematch on Dec. 5, and Pittsburgh is the only other among the 13 opponents remaining for Minnesota that currently has a losing record.