Russell Wilson shows Broncos he still has it in crunch time 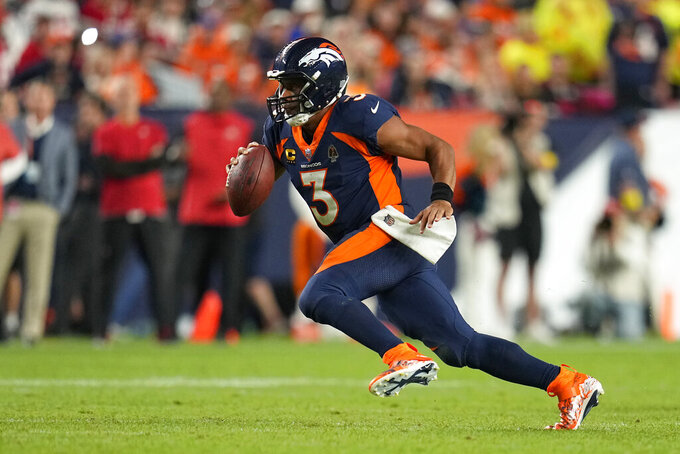 DENVER (AP) — The Denver Broncos went three-and-out nine times against the San Francisco 49ers, the most in Russell Wilson's 11-year career. And only once did they get anywhere near the end zone.

“In the fourth quarter, when it mattered most, we clicked,” Wilson said after leading the lone long touchdown drive that powered the Broncos past the 49ers 11-10 Sunday night.

Wilson has gotten off to a slow start with his new team as he tries to mesh his style that embraces off-schedule plays when defenses break down with the philosophies of rookie head coach Nathaniel Hackett, whose version of the West Coast offense is predicated on quick throws.

Wilson has just three touchdown passes in three games and he has rushed for just 22 yards.

But he has engineered back-to-back fourth-quarter comebacks over Houston and San Francisco, and the Broncos are tied atop the AFC West with Kansas City at 2-1 after the Chiefs, Chargers and Raiders all lost Sunday.

Midway through the fourth quarter Sunday night, Wilson finally looked like the quarterback who signed a $245 million extension before he'd even taken a single snap for the Broncos.

On third-and-10 from his own 33, Wilson bought time in the pocket by spinning to his left and launching a 27-yard pass on the run to Kendall Hinton at the San Francisco 40.

“I guess I can still go left,” Wilson said in a potshot at his former coach in Seattle, Pete Carroll, who gloated after the Seahawks' 17-16 win over Denver in Week 1 that he schemed to get Wilson moving to his left.

Three plays later, on third-and-6, Wilson found his receivers covered, stepped up and darted through the line for a 12-yard gain — by far his longest run of 2022.

“Really in the fourth quarter, I had to kind of use my legs and take over,” Wilson said. “Just try to move around and find some first downs.”

One play after that, he audibled out of a run call and hit Courtland Sutton in 1-on-1 coverage at the 5-yard line, and Melvin Gordon took it in from the 1 two plays later to put Denver ahead for the first time.

“That was pretty huge how he walked into the end zone there,” Wilson said after the Broncos' first red zone touchdown in seven tries this season.

“This atmosphere felt like a playoff atmosphere,” Wilson said. "That’s what we need. It means a lot to us as players to obviously go against a great team like that. We’re still all learning each other — it’s a whole new system. Everyone is coming together but there’s so much greatness in store. I can’t wait for it.

“Just watching out defense battle, battle, battle against a really good offense and then giving us a chance. And everybody just believes in each other. That’s what football is all about.”

Denver's defense, which is allowing just 12 points a game.

“I don’t want to get too brash in saying this," suggested Chubb, "but we’re the best in the (expletive) league.”

Denver's offense. It's still sputtering and the Broncos are going to need to average more than 14.3 points a game if they have a realistic chance of keeping up with Patrick Mahomes in the AFC West.

Broncos defensive coordinator Ejoro Evero. At this rate, Hackett will lose him to a head coaching opportunity sooner than anyone might have imagined. ... Punter Corliss Waitman averaged nearly 48 yards on 10 punts and six times buried the 49ers inside their 20-yard line.

Albert Okwuegbunam's 12-yard catch was the only one by Denver's tight ends (who were only targeted three times).

5 — The number of penalties on Denver, for 30 yards, after the Broncos were whistled for a league-high 25 infractions through the first two weeks.

The Broncos visit the winless Raiders (0-3) and if Hackett wants to quiet the boo-birds he cannot hand Josh McDaniels his first win as a head coach since Nov. 24, 2010, when his brief stay in Denver was quickly winding down.