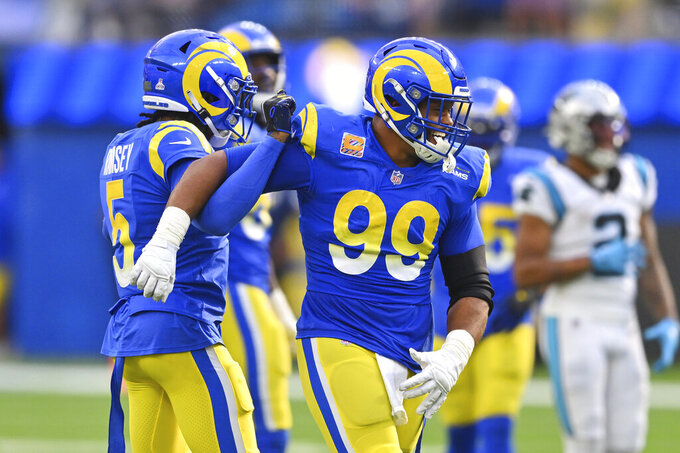 LOS ANGELES (AP) — Jalen Ramsey has covered a lot of ground in his football career, and now he's even finding his way into his opponents' pocket.

After winning a national championship at Florida State, the fleet-footed defensive back is now a three-time All-Pro with a Super Bowl ring from the Rams. He plays a key role on every level of Los Angeles' defense in the bespoke “Star” position, putting him in man-to-man coverage, in zone protection and in a run-stopping capacity from play to play.

And after playing six NFL seasons without sacking a quarterback, Ramsey is now a pass-rushing weapon with a sack in back-to-back games for the defending champions (3-3) as they hit their bye week.

“I definitely still get a little reaction out of them,” Ramsey said of his teammates' sideline celebrations of his sacks. “It's just funny that I've been playing (this long) and I haven't gotten sacks, and I've got two in a row now.”

Ramsey's latest standout season is one of several bright spots on his side of the ball for the Rams, who are awakening memories of 2020 with one of the NFL's most effective defensive units backing up an inconsistent offense.

Los Angeles is allowing 21 points per game and 301.3 yards, keeping the Rams competitive despite an offense that can't run the ball behind an injury-laden offensive line. No team has allowed fewer first downs than the Rams' defense, which also ranks second in red-zone effectiveness.

Pro Football Focus ranks the Rams' defense third in the league this season despite having its share of the injuries that have hit Los Angeles' roster much harder than usual.

The Rams' secondary has been missing two key players who are expected to return after the bye: veteran cornerback Troy Hill and rookie Cobie Durant. When they're back, Ramsey believes the whole group will get a boost.

“I'm usually never happy for an early bye, but it's coming at a good spot right now,” Ramsey said. “Hopefully we get some guys back from injury.”

Even with injury absences, coordinator Raheem Morris is leading another effective, resilient group. Los Angeles thoroughly shut down struggling Carolina in its final game before the bye, yielding 203 yards and three offensive points in the 24-10 victory.

The Rams’ numbers are even more impressive because of the way their season started: Buffalo wrecked the defending champs’ banner-raising night with 31 points and 413 yards in a blowout victory.

The Rams have allowed only one touchdown pass in their past four games, tied for the fewest in the NFL in that stretch, after giving up five in the first two weeks. Los Angeles' last five opponents have combined for four touchdown drives longer than 40 yards after Buffalo did it four times in the opener.

The Rams have been successful even without much of a pass rush in the absence of Von Miller, who left for more money in Buffalo after the Super Bowl.

Los Angeles is tied for 20th in the league with 12 sacks, including four by Aaron Donald. Top edge rusher Leonard Floyd has no sacks, while Terrell Lewis and Justin Hollins have one apiece.

“Our pass rush just in general has to pick up,” Morris said. “All those things are what make us great. When those things get rolling, our pass rushers get home, they cause disruption, they tip balls, they make the things happen that make defense easy. We need more opportunities like that. Right now, we’re playing decent, but you can play so much better, and we all know what it looks like.”

The edge rushers have all been outproduced by Ramsey and Bobby Wagner, who have two sacks apiece. Wagner has been a solid contributor in his first season in LA, while his fellow inside linebacker, Ernest Jones, has grown into a vital part of the group.

The Rams' solidity on defense allows coach Sean McVay to keep most of his focus on his offense, which is in for even more difficulties with the season-ending Achilles tendon injury for left tackle Joseph Noteboom last Sunday. Los Angeles can use the bye week to decide whether to stick with backup Alaric Jackson protecting Matthew Stafford's blind spot, since the undrafted free agent appears to be the best available option by far.

And when McVay isn't thinking about his offensive line, he's figuring out how to run the ball without Cam Akers, who is being openly shopped for a trade after falling out with the coaching staff. McVay's inability to find common ground with Akers is surprising, given the coach's lengthy history of solid relationships with his players, so that failure could be a source of frustration during the break.

“I think that the communication has been pretty clear and there’s been good dialogue, but that doesn’t always mean that the solutions are in alignment,” McVay said. “Sometimes good dialogue can lead to clarity on making a decision that isn’t necessarily easy, but it’s the best.”