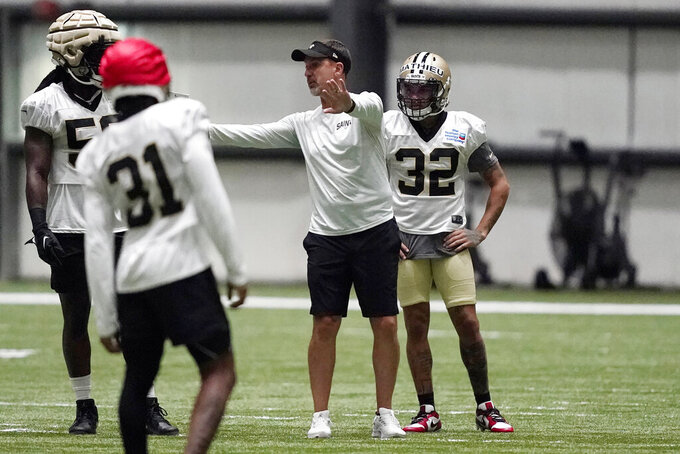 METAIRIE, La. (AP) — New Orleans Saints safety Tyrann Mathieu reported for training camp and participated in practice drills in his No. 32 jersey on Wednesday after initially being excused for what the team described as a personal matter.

Mathieu returned after missing the first six practices of camp.

“I love having him back. It was great to see him,” coach Dennis Allen said. “I had a chance to visit with him at the (team's training camp) hotel. He seems to be in really good spirits. He's anxious to kind of get back here and get started.”

The offseason addition of Mathieu to the Saints' secondary was met with much fanfare in New Orleans, where Mathieu grew up and played in high school before starring in college at LSU. The 30-year-old, nine-year NFL veteran agreed to a three-year, $33 million free-agent contract with the Saints in early May.

But just before players were due to report for camp, the Saints announced that Mathieu would be excused and there was no timetable for his return. No details were disclosed about the nature of the issues keeping Mathieu away, and he was not available for interviews after practice.

Mathieu appeared upbeat while on the field. He participated in a range of individual drills before sitting out the higher-intensity work in which receivers and defensive backs were matched up at full speed in seven-on-seven or 11-on-11 snaps.

“We'll go through a little bit of a ramp-up period with him,” Allen said. “But, man, to have a player of his decorated ability back in the building is a positive.”

Allen said the number of practices Mathieu missed was not a major concern.

“He's a veteran player,” Allen said. "When you really want to talk about what we're doing defensively from a schematic standpoint, it's not a lot different than what you're going to see on a lot of the other teams. It really gets more down to terminology and some of the minor, little adjustments that we might make.

“It's more about just getting him ready for football conditioning,” Allen added.

Mathieu was raised by his grandparents in New Orleans, then became a star football player and track athlete for St. Augustine High School. He has maintained deep ties to the city, enhanced through his charitable endeavors and football camps in the area.

He also still has strong ties to LSU, where a players' lounge in the football operations building is named for him.

Mathieu's tenacious play at LSU earned him the nickname “Honey Badger." He played two seasons for the Tigers. As a sophomore in 2011, he was a Heisman Trophy finalist and won the Bednarik Award as the nation’s top defensive player. But his college career was cut short when then-Tigers coach Les Miles dismissed Mathieu in the summer of 2012 for repeated drug test failures.

Mathieu spent time in a Houston rehabilitation program, but it wasn’t until he was drafted by Arizona in the third round in 2013 that he put his life together. Mathieu became a dependable defensive standout for coach Bruce Arians and has since added two All-Pro nods with Kansas City to go with one earned in Arizona. He also has been named to the Pro Bowl each of the past three seasons.

Mathieu wound up playing five seasons for Arizona before a year with the Texans. He then signed with Kansas City and immediately became the quarterback of the Chiefs' defense, often relaying signals and directing the pre-snap alignment of defensive teammates.

NOTES: Rookie left tackle Trevor Penning, one of the Saints' two first-round draft choices this spring, was involved in a post-whistle scuffle for a third straight day. This time Penning was sent off of the field, along with defensive lineman Malcolm Roach. “We've got to learn as a team how to compete and how to play and how to practice, and push ourselves to the limit, and yet not take it over the edge,” Allen said. ... Allen said undrafted rookie defensive back Smoke Monday has “a significant knee injury” but did not offer further details or updates on his condition.