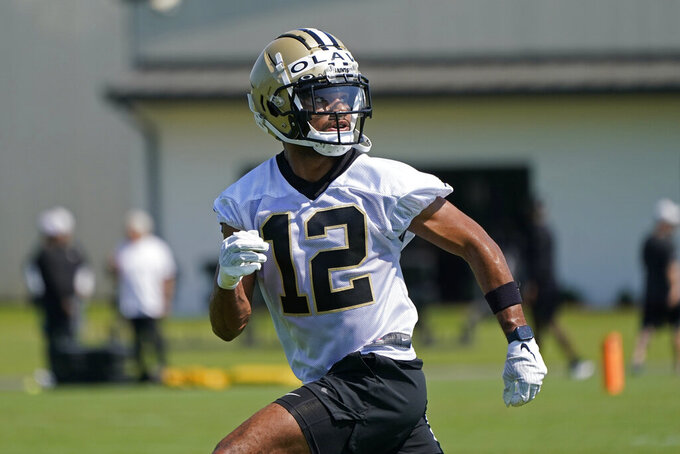 METAIRIE, La. (AP) — The New Orleans Saints expect their offense to be more productive next season.

The optimism is largely based on the expectation that they will have quarterback Jameis Winston and former All-Pro wide receiver Michael Thomas back from serious injuries.

Neither is all the way back, but it’s a long way to the start of the season and both are making progress.

The Saints concluded their opening week of voluntary offseason practices Thursday. Winston participated on a limited basis and Thomas was at the team’s facility but didn’t practice.

“We have time,” Winston said after practice. “The season isn’t next week. (We’re) cherishing these opportunities where we get to grow mentally. I was so excited to see that Mike was in the building, being around the team.”

Winston, who is seven months past reconstructive ACL surgery on his left knee that he injured in the seventh game of last season, said his drop-backs are “full speed,” but he’s “still progressing into running.”

“I’m not rolling out yet,” he added. “I want to be ready right now, but I’m embracing this process and finding something to get better at every single day.

The Saints finished last season with the least-productive passing game in the NFL and missed the playoffs with a 9-8 record. Three quarterbacks — Taysom Hill, Trevor Siemian and rookie Ian Book — had a chance to start after Winston was injured, but the passing game never came around.

Thomas didn’t play at all last season. He waited until June to have surgery to repair an ankle injury that limited him to seven games in 2020 after he was hurt in the season opener.

Thomas’ expected return last season never happened after he underwent a second procedure on his ankle.

The last time Thomas was healthy he earned All-Pro honors by setting an NFL record with 149 catches in 2019.

Former head coach Sean Payton was unhappy that Thomas waited to have his surgery but his presence at these OTAs — even though he’s unable to practice — is a sign that his relationship with the organization has improved.

First-year head coach Dennis Allen expects Thomas to be ready for the start of training camp at the end of July.

“I think he’s doing well in his rehab,” Allen said. “He’s not ready yet. He’s here, he’s rehabbing, he’s getting himself better.”

Winston should have a much-improved receiving corps beyond just Thomas’ return. The Saints signed five-time Pro Bowler Jarvis Landry as a free agent and traded up in the first round of the draft to select Ohio State’s Chris Olave with the 11th pick.

Landry did not participate Thursday in voluntary workouts, but Olave did.

“He’s just really smooth,” Winston said about Olave. “He can get in and out of breaks very well. He’s electric and smart. He’s a guy that’s always asking questions, a guy that wants to know how you want it. I really respect that. He’s a pro right now as a rookie.”

There are questions surrounding the running game because of ongoing legal matters surrounding Pro Bowl running back Alvin Kamara, who also was absent Thursday.

Kamara was arrested in February after an altercation at a Las Vegas hotel. His court date has been postponed until Aug. 1.