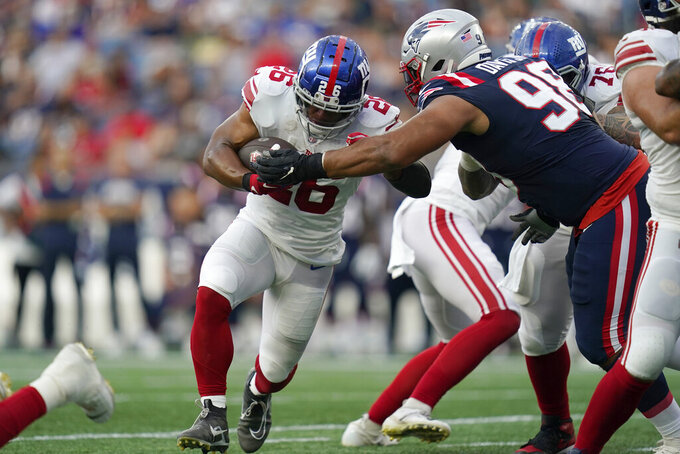 EAST RUTHERFORD, N.J. (AP) — If there is anything markedly different in the New York Giants' offense since Brian Daboll took over, it's Saquon Barkley.

Forget the hints of the Bills' offense that Daboll brought to Giants after they hired the former Buffalo offensive coordinator to be their head coach in January. Ignore the portions of the Chiefs' offense that coordinator Mike Kafka added in his move from Kansas City.

With less than a month to go until the regular-season opener against the Titans in Tennessee, Barkley is the most dynamic piece of the new O. He is looking like the Penn State running back that New York drafted No. 2 overall in 2018 and then tore up the league, rushing for 1,307 yards and 11 touchdowns while catching 91 passes for 721 yards and four TDs.

“I kind of have that confidence back, that any time I touch the ball that I can take the house, whether it’s blocked up, or (we) catch the defense lacking,” Barkley said Thursday. “I feel like I can do that.”

The feeling is a lot different from a year ago when Barkley came to training camp after missing most of the 2020 season with a torn ACL. His practice time was limited by the training staff and his status for the season opener was a major question mark. He played but had a terrible season, rushing for 593 yards and two touchdowns on a team that posted a 4-13 record.

That's not the case this year, although the coaching staff has cut back on his reps in camp just to keep him fresh. He had four carries for 13 yards in the 23-21 victory over the Patriots last week in the preseason opener.

The 25-year-old Barkley feels his ability to practice more will help his game.

“I can come out here and work on my craft and get better every single day,” he said. “That’s the biggest difference: Practice makes perfect. I’m a big believer in that. Obviously, no one is ever going to be perfect. My game will never be perfect, but that’s something that you’re going to shoot for and the only way you can do that is by practicing.”

Barkley has not done that since his rookie season. His second year was disrupted by ankle injuries. The third year was the knee, and when he finally got in gear midway through last season, he stepped on the foot of a Dallas defensive back and severely sprained an ankle again.

If he can stay healthy, he will be the focal point of the offense and take the pressure off either Daniel Jones or backup quarterback Tyrod Taylor.

Barkley is tired of experts saying he doesn't run north and south enough.

“I’m really kind of fed up with people who never played the position, then (they) try to speak on how to run the football,” Barkley said. “We call them All Pros with clickers in their hand.”

Barkley has no intention of running north and south, only to run into the backs of his linemen. He pointed out there are a lot of things involved in making a cut while carrying the ball: A back's shoulders have to be square, his vision on the field needs to be unimpeded and he has to move his feet sometimes to set up a block.

What also will help him is that the Giants signed free agent center Jon Feliciano and guards Mark Glowinski and Max Garcia, while drafting tackle Evan Neal (No. 7 overall) and guard Josh Ezeudu in the third round.

Having help on the line did a good job in paving the way for New York to run 177 yards against New England.

NOTES: Backup guard/center Ben Bredeson left practice with his right elbow wrapped. ... Cornerback Aaron Robinson was banged up on a play near the goal line and left the field late in practice. ... Kenny Golladay had a good day at practice, catching several balls, including a deep pass from Jones. “I thought we spread the ball around well, and obviously, he had the deep shot, and he made a nice adjustment on a big play there.” Jones said.