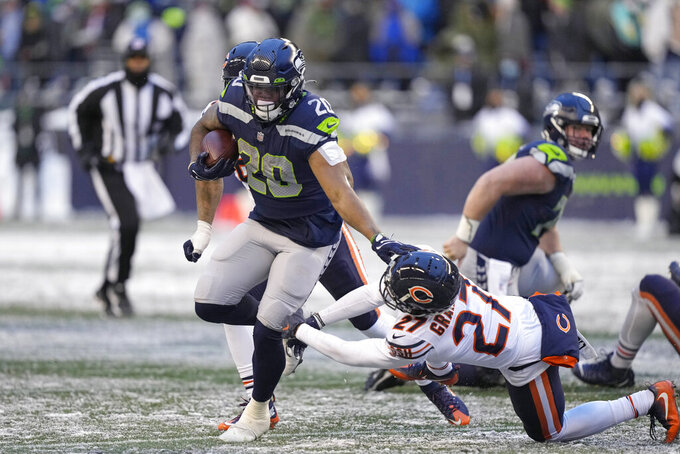 Seattle Seahawks running back Rashaad Penny (20) carries against the Chicago Bears during the second half of an NFL football game, Sunday, Dec. 26, 2021, in Seattle. (AP Photo/Stephen Brashear)

OPENING LINE: Seahawks by 7, according to FanDuel SportsBook.

TURNOVER DIFFERENTIAL: Bears minus-4; Seahawks plus-3.

LIONS PLAYER TO WATCH: WR Amon-Ra St. Brown. The rookie receiver had one of the best Decembers of any NFL pass catcher this season. St. Brown ranked second among wide receivers in receptions (35) and fourth in receiving yards (340) for the entire month. Last week against the Falcons, he set a career high with 91 receiving yards.

SEAHAWKS PLAYER TO WATCH: Bobby Wagner has already set a career high and franchise record for tackles in a single season. He leads the league with 170 going into Sunday’s game. But for all he’s accomplished in his 10 seasons with the Seahawks, it’s possible this could be his final home game — depending on how significant the changes are this offseason for Seattle. Wagner carries a hefty $20 million cap hit in the final year of his contract next season.

KEY MATCHUP: One thing the Lions have done well recently is run the ball. Detroit has at least 100 yards rushing in six of the past seven games and should have leading rusher D’Andre Swift back. Seattle’s been stingy against the run, holding four of its past six opponents under 100 yards rushing. Seattle is tied for the league lead with New Orleans allowing 3.7 yards per carry.

KEY INJURIES: Detroit is short-handed at tight end as Shane Zylstra suffered a season-ending knee injury in Atlanta, and Brock Wright was placed on the reserve/COVID-19 list. With TE T.J. Hockenson already out for the year, the Lions signed Jared Pinkney from the Rams' practice squad. … Top WR Josh Reynolds was placed on the virus list Monday, but under new league protocols could return by Sunday. ... Two other starters on the virus list are DT Michael Brockers and G Halapoulivaati Vaitai. … After missing last week’s game, QB Jared Goff was removed from the COVID-19 list, but he skipped Wednesday’s practice with a knee injury. … Swift (shoulder) has missed the past four games, but he returned to practice last week and is expected to play. ... Seattle is mostly healthy and should have starting CB D.J. Reed (COVID-19) back after missing the past two games. ... RT Brandon Shell (shoulder) is likely out again, while RB Alex Collins (abdomen) could play for the first time since Week 14.

SERIES NOTES: Seattle has won five of the past six regular-season meetings, including the last one in 2018 in Detroit. The last win for Detroit came in 2012 at home. The last regular-season match in Seattle was a 13-10 victory for the Seahawks on a Monday night and a controversial ending with a disputed fumble being intentionally batted out of the end zone by a Seattle player. The Seahawks beat the Lions 26-6 in the 2016 playoffs, the only postseason matchup between the teams.

STATS AND STUFF: The Lions are one of 11 teams to play in at least eight one-score games this season. The 10 other teams have won at least four of those games. The Lions have won just one. … Alim McNeill picked up his second sack of the season last week. He is one of just five rookie defensive tackles to have two or more sacks on the season. … St. Brown has a touchdown in three of his past four games. … Lions rookie kicker Riley Patterson is a perfect 10 for 10 on field goals and 9 for 9 on extra points since he made his NFL debut in Week 12. ... Seattle is 2-5 at home this season after going 7-1 last year. ... Seattle QB Russell Wilson needs two TD passes to join Peyton Manning and Dan Marino as the only QBs with at least 20 TD passes in each of their first 10 seasons. ... DK Metcalf caught his first TD since Week 8 last week. ... With six tackles, Wagner would post the most by any player since 2000. Wagner has 170 tackles through 15 games.

FANTASY TIP: RB Rashaad Penny is making a strong argument to be part of the Seahawks’ plans going into next season. He’s posted 100-yard rushing games in two of the past three weeks and now faces a Detroit defense that’s 27th in the league in stopping the run.