Seahawks silenced as big leads disappear in loss to Titans 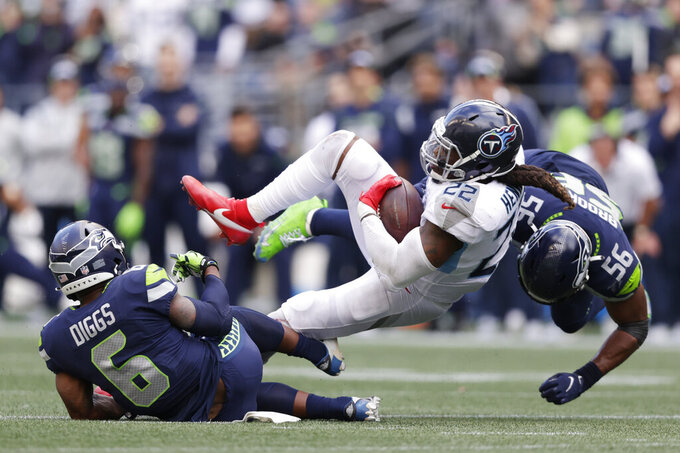 Tennessee Titans running back Derrick Henry (22) is tackled by linebacker Jordyn Brooks (56) and strong safety Quandre Diggs (6) during the second half of an NFL football game, Sunday, Sept. 19, 2021, in Seattle. The Titans won 33-30 in overtime. (AP Photo/John Froschauer)

SEATTLE (AP) — Pete Carroll was sullen, almost in a state of disbelief. Of all the crazy outcomes during his tenure as coach of the Seattle Seahawks, there has rarely been a meltdown like this.

Up 15 points at halftime, leading by 14 points early in the fourth quarter, the Seahawks went on to the kind of loss that could prove rather costly playing in arguably the toughest division in the NFL.

“I don’t think any of us expected to lose a game like that,” Seattle wide receiver Tyler Lockett said.

Unable to contain Derrick Henry at key moments, Seattle lost 33-30 to Tennessee in overtime on Sunday. It was a surprising result after the Seahawks led 24-9 at halftime and 30-16 early in the fourth quarter after Freddie Swain broke free for a 68-yard touchdown reception.

It all fell apart with a series of mistakes that encompassed every aspect of the Seahawks roster, leading to a stinging setback.

“We did so many good things and then we really hurt ourselves just too many times when you’re playing a good team,” Carroll said.

Seattle lost for just the fourth time in franchise history when leading by at least 15 points at halftime. It was the second time under Carroll that the Seahawks lost a 14-point fourth-quarter lead, the previous time coming in 2015 in an overtime loss at Cincinnati.

Everyone was at fault. The offense couldn’t put together a fourth-quarter drive for a clinching score. The defense couldn’t get enough stops and committed a handful of untimely penalties that extended Tennessee drives.

And special teams became a deciding factor after Jason Myers missed an extra point following Swain’s touchdown that would have restored the Seahawks' 15-point lead.

Henry took over down the stretch, rumbling for two fourth-quarter TDs for Tennessee. Russell Wilson and Seattle’s offense had just two first downs on their final four possessions, both meaningless and coming in the waning seconds of regulation. Wilson’s unit went three-and-out twice in the fourth with a chance for a clinching score.

In overtime, Wilson nearly got sacked for a game-ending safety and Seattle had the ball for just three plays. The inability by Seattle to move the ball in overtime set the stage for Randy Bullock’s winning 36-yard field goal for the Titans.

“To lose that kind of game, we were up pretty good there in the second half and all that, the game just kind of slipped away from us,” Wilson said. “We could have played tighter across the board.”

Considering the fourth quarter and the idea of finishing is one of the hallmarks for Carroll teams, this type of loss is one that will bother the coach.

Especially after Seattle made it look so easy in the first half.

Henry was bottled up, managing just 35 yards on 13 carries. Lockett topped 100 yards receiving before halftime. Seattle scored twice in the span of 74 seconds in the second quarter. After Lockett’s 63-yard touchdown reception, Alton Robinson sacked Ryan Tannehill and forced a fumble. Moments later, Chris Carson scored from the 2 for a 17-6 lead.

To cap off the first half, Seattle went 75 yards in 48 seconds and Carson scored again to take a 15-point lead. The crowd that waited 21 months to attend a regular-season game roared, the stadium swayed and a party nearly two years in the making was on its way to an expected outcome.

A few hours later, the conclusion was far different, with silent fans shuffling toward the exits after a sour conclusion.

“Frustrated that we didn’t come out on top. We beat ourselves,” Seattle safety Jamal Adams said. “Hats off to Tennessee, a great football team, but we put ourselves in a hole and just couldn’t get out.”