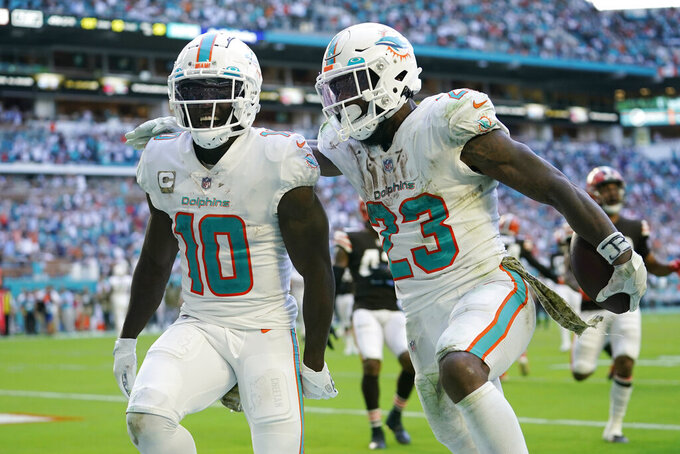 It’s a good time to reflect on the things we’re thankful for this week and our fantasy stars should be no exception. So let's dig into our best bets to score in Week 12 of the NFL season.

Walker has scored in five of the past six games he’s started in his rookie season, so it’s no surprise he’s a best bet to score this week. He’ll face Las Vegas, our fourth-best matchup for opposing RBs, and he’s bringing -275 odds to find the end zone with him. Having an 87% snap count in Week 10, before hiss bye, Walker will rarely find himself on the sideline, and he’ll get plenty of goal-line work to himself.

Wilson didn’t take long to usurp Raheem Mostert as the starter in Miami, and that’s good news for his owners, as Wilson is going up against our absolute best matchup for opposing RBs this week in the Texans. If there’s any question about Wilson’s lead role, it’s been answered in his usage in comparison to Mostert. Wilson played 61% of snaps in their previous game before the bye, while Mostert played just 28%. Wilson is primed to reach the end zone at least once in this matchup.

The Cardinals’ opponent this week, the Chargers, cover the pass well — they’re our 10th-worst matchup for opposing WRs in Week 12. The Chargers are our third-best matchup for opposing RBs this week, so Conner could have little trouble finding lanes to the end zone. He’s scored in the past two games he’s received a full complement of snaps since returning from injury, and Conner played 77% of snaps in Week 11 — only four running backs had more snaps. With -125 odds to score, Conner is close to a lock.

Kirk has a career-high seven TDs going into Week 12 and he was on a hot streak going into the Week 11 bye, scoring three TDs in the two games prior. Kirk will look to continue his dynamic play against a Ravens team that is our 12th-best matchup for opposing WRs this week and perhaps more importantly, our third-worst matchup for opposing RBs. Expect Jacksonville to lean heavily on Kirk, who is coming off a season high 12 targets in his previous game.

It seems a given that we’d find Diggs here once again as the savvy veteran WR is second in receiver TDs to only Davante Adams. Adams has some tough sledding against the Seahawks' secondary this week, our sixth-worst WR matchup. But Diggs will face our absolute best WR matchup, the Lions. Vegas loves Diggs this week based on the matchup, as they’ve given him the best odds to score (-150) of any WR in Week 12. It’s almost a foregone conclusion that Diggs will cross the goal line.

Ja’Marr Chase is day to day with a hip injury and questionable to start this week, so I’m banking on Tee Higgins to play a major role against the Titans, our fourth-best matchup for opposing WRs in Week 12. Higgins failed to score in Week 11 with Chase sidelined, but he did lead the team with nine catches for 148 yards and would be the No.1 target again this week if Chase can’t go. An important factor in this game is that while the Titans are a top-five wide receiver matchup, they’re a second-worst running back matchup. Even if Chase makes it back, Higgins is still very viable as he’s averaging eight targets a game since Week 2 and enters Week 12 with 120 odds to score.