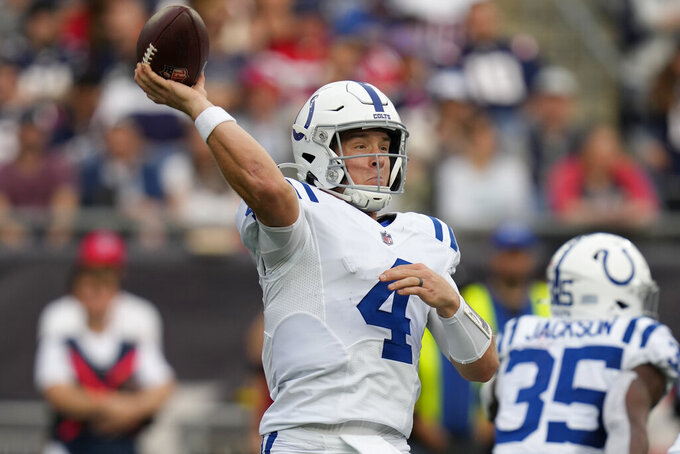 Indianapolis Colts quarterback Sam Ehlinger (4) looks to pass the ball in the second half of an NFL football game against the New England Patriots, Sunday, Nov. 6, 2022, in Foxborough, Mass. (AP Photo/Charles Krupa)

Until Monday, he was an ESPN analyst.

The unorthodox move by the Colts to hire Saturday after firing Frank Reich has forced the Raiders — already down two key weapons with tight end Darren Waller and wide receiver Hunter Renfrow going on injured reserve Thursday — to head into Sunday's game in Las Vegas largely in the dark.

“I would assume that they’re going to let the coaches that have been there to coach,” Raiders coach Josh McDaniels said. “And the scheme isn’t going to dramatically change on offense, defense or in the kicking game. And we talked (Wednesday) morning, they’re going to be ready to go because Jeff will have them ready to go.”

One of the coaches on the Colts' staff is defensive coordinator Gus Bradley, who served in the same role in Las Vegas last year, so there is some familiarity. But it works both ways because Bradley has insight on how to defend the Raiders' offense, though he noted the system and some of the personnel has changed.

No matter who's in charge, both teams find themselves in similar positions.

The Raiders are 2-6 and in last in the AFC West, a far cry from the team that made the playoffs last season.

Indianapolis is in second in the AFC South, but the Colts are 3-5-1 and have lost three consecutive games, prompting a slew of changes. In addition to firing Reich, the club dismissed offensive coordinator Marcus Brady, benched veteran quarterback Matt Ryan and traded running back Nyheim Hines to Buffalo.

Though the moves smack of desperation, there is still half a season to play.

“No one thinks we can do anything," Colts center Ryan Kelly said. "It’s a head coach who hadn’t been here previous to that. New offensive coordinator, all the cards stacked against you right, but we know what we have in the locker room and go out there and prove to each other that no one’s quitting on this team.”

Saturday announced Wednesday he gave Frazier the offensive coordinator job because it would cause the least amount of upheaval and Frazier has been around longer than the other offensive coaches. Ehlinger, though, doesn’t see it as a big deal.

“For me, I think it comes down to having a process at the line of scrimmage,” Ehlinger said. “Eliminating emotion, elimination of anything that doesn’t help me get the play, call the play and execute the play at a high level. That’s just what I have to focus on.”

McDaniels calls the plays for the Raiders, and that is more than fine with quarterback Derek Carr.

“When the head coach is calling them ... there’s only one voice,” Carr said. "When someone else is calling them, you’ve got two voices and you hope in your organization that the voices align right: ‘Hey, it’s this situation. I want the ball to do this. Or I’m looking for this, or I want this to happen.’ And when those voices are in sync, those are usually good things.

"So when the head coach is calling the plays it’s easier for me, because whatever he’s saying, there’s no getting in trouble because he’s the boss.”

Carr is used to working under that system since previous coach Jon Gruden also called the plays. When Gruden was fired in midseason, interim coach Rich Bisaccia, however, turned play-calling over offensive coordinator Greg Olson.

The moves over the past two weeks have created murmurs about the Colts tanking.

Indy has been seeking a new franchise quarterback since Andrew Luck’s surprise retirement in August 2019. With eight games left, losing would help the Colts improve their draft position and possibly finish with a high enough spot to take a new, young quarterback. Players and coaches aren’t buying it.

“No shot. There’s too much pride in this locker room,” starting linebacker Bobby Okereke said. “From players, staff, from an organizational standpoint, we want to win and that’s what we’re going to do.”

Safety Johnathan Abram, selected 27th overall in 2019 by the Raiders, could have left feeling bitter.

He not only was waived Tuesday, but he also lost his starting job two weeks ago and had his playing time drastically cut.

But Abram, who was picked up Thursday by the Green Bay Packers, expressed gratitude for his time with the Raiders.

“It was always an honor and privilege to suit up in that silver and black,” he tweeted. “Forever grateful for the opportunity. Made a lot of everlasting memories and relationships. Breaks my heart to leave. Felt like I would be a Raider forever.”