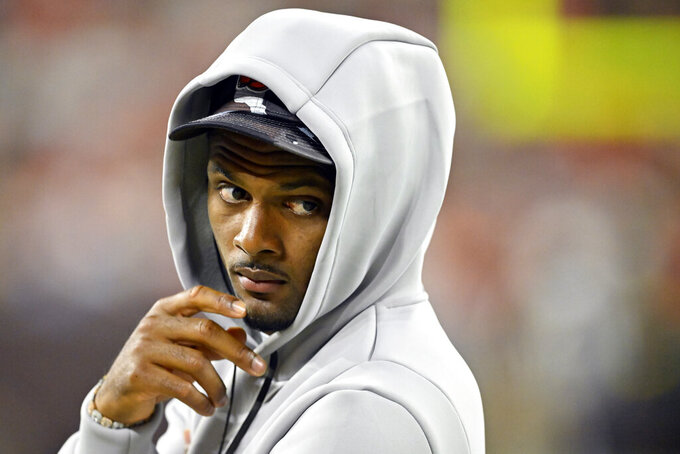 FILE 0 Cleveland Browns quarterback Deshaun Watson stands on the field during an NFL preseason football game against the Chicago Bears, Saturday, Aug. 27, 2022, in Cleveland. othing can slow the NFL’s popularity, but there are significant, unsavory off-field issues that are looming over the league as the season heads to the second half: multiple investigations of Commanders owner Daniel Snyder; the suspension and pending return of Browns QB Deshaun Watson; the lawsuit brought by Steelers assistant coach Brian Flores. (AP Photo/David Richard, File)

Nothing, it seems, can slow the NFL’s overwhelming and ever-growing popularity, no matter how poor the play, how inconsistent the officiating, how shaky the concussion protocols — and no matter how many significant, unsavory off-field issues loom as the season enters its second half.

There are multiple ongoing investigations of Washington Commanders owner Daniel Snyder, including one by the District of Columbia Attorney General Karl Racine, who filed a civil consumer protection lawsuit Thursday against the team, Snyder, the NFL and Commissioner Roger Goodell. There is the impending return of Cleveland Browns quarterback Deshaun Watson from an 11-game suspension negotiated with the league after about two dozen women filed civil suits accusing him of sexual misconduct. And there is the pending racial discrimination lawsuit brought by Pittsburgh Steelers assistant Brian Flores.

When Goodell testified before the House Committee on Oversight and Reform in June in connection with its look at Snyder, his prepared statement included this vow: “I have been, and remain, committed to ensuring that all employees of the NFL and the 32 clubs work in a professional and supportive environment that is free from discrimination, harassment or other forms of illegal or unprofessional conduct.”

Those are the sorts of things at play with these three matters, which are the kinds of stories about bad acts and bad actors that surely make some folks uncomfortable cheering for a certain team or plunking down cash that supports a sport as a whole. Still, that does not seem to make a difference when it comes to professional football, which has proved to be impervious over the long run to whatever negative publicity comes its way.

Remember the lawsuits about brain injuries brought by former players? How about the whole Donald Trump vs. Colin Kaepernick to-do? Or the domestic violence cases involving Ray Rice, Tyreek Hill and Adrian Peterson?

Since the start of this season, NFL content — games and studio shows — ranked no worse than first and second, sometimes even holding spots 1-7, each week in the Nielsen company’s list of most popular prime-time TV programs.

Then there’s this: Through Week 9, 27 of the 32 teams are drawing more spectators per home game so far in 2022 than they did to the same point of last season. Two of the others maintained the same attendance by extending sellout streaks.

Here is a look at where things stand with regard to Snyder, Watson and the lawsuit filed by Flores:

This will remain in the news unless and until Snyder actually goes through with selling a majority stake in the Commanders or his fellow owners vote him out.

Both of those outcomes seemed rather unlikely until last month. First, Indianapolis Colts owner Jim Irsay said there was “merit” to removing Snyder, who has been accused of groping a team employee and of overseeing a workplace in which women were frequently harassed and demeaned. Two weeks later, the Commanders announced the hiring of a financial services firm to “consider potential transactions,” and a team spokesperson said, “We are exploring all options.”

Hanging over Snyder, and the sport, are no fewer than four inquiries, including by the NFL itself and by Congress, into sexual or financial improprieties during his losing-on-and-off-the-field tenure. No one knows how long those might last; Goodell said there was no timeline for the league’s investigation, its second focused on Snyder.

Barring an unexpected development, Watson will return to practice next week with the struggling Browns and appear in his first NFL game in 23 months on Dec. 4, against his former club, the Houston Texans.

Accused of harassing, assaulting or touching massage therapists during sessions, Watson settled out of court with most of the women after signing a deal with the Browns worth $230 million, the largest guaranteed contract in league history.

His return to the field could drum up the type of reception — on the road, at least — that Watson heard at Cleveland’s first exhibition game, back in August at the Jacksonville Jaguars: He was loudly booed, and some spectators chanted vulgarities in his direction.

Regardless of how Watson himself is greeted, his presence could be seen by some critics as another instance of the NFL and its teams failing to care enough about women.

Shortly after being fired by Miami as its head coach, Flores — who is Black — sued the Dolphins, the New York Giants, the Denver Broncos and the NFL in Manhattan federal court on Feb. 1, saying the hiring practices for coaches and general managers are “rife with racism.”

“My sincere hope is that by standing up against systemic racism in the NFL,” Flores said in a statement released by his lawyers that day, “others will join me to ensure that positive change is made for generations to come.”

Flores later was brought aboard by Pittsburgh coach Mike Tomlin to work with the club’s inside linebackers.

It’s unclear how and when this will all unfold. The case is stuck in procedural matters at the moment as Flores, Wilks and Horton aim for a jury trial, while the league hopes to go to arbitration, with Goodell or someone he designates overseeing the matter.

In the meantime, the NFL has made incremental changes to its hiring process and the “Rooney Rule,” the kind of updates that previously were tried, without much effect on the disparity between the number of Black players (more than half of the league) and number of teams with minority head coaches (seven of 32).

A reminder of the history and the sentiment that prompted Flores’ suit came just this week, when Irsay chose Jeff Saturday, a former player with zero coaching experience beyond the high school level, to replace the fired Frank Reich as head coach of the Colts.

AP Sports Writers Will Graves in Pittsburgh, Stephen Whyno in Washington and Tom Withers in Cleveland contributed to this report.