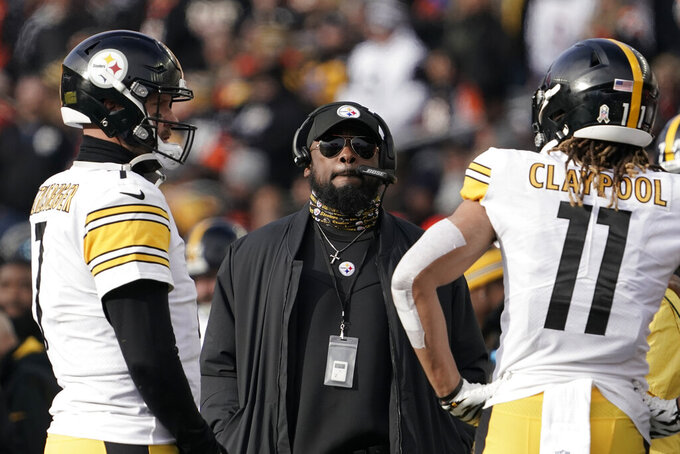 Pittsburgh Steelers head coach Mike Tomlin, center, looks up at the videoboard as he stands with quarterback Ben Roethlisberger (7) and wide receiver Chase Claypool (11) during a timeout during the second half of an NFL football game against the Cincinnati Bengals, Sunday, Nov. 28, 2021, in Cincinnati. (AP Photo/Aaron Doster)

PITTSBURGH (AP) — The Pittsburgh Steelers took a flyer on Mike Hilton five years ago, and the undersized cornerback repaid their faith by becoming one of the most versatile defensive backs in the NFL, a relentless 5-foot-9 tornado who maximized every last ounce of his talent.

A talent that ultimately became too expensive to keep.

When Hilton hit the open market last spring, the Steelers — grappling with a one-time-only unexpected dip in the salary cap because of the COVID-19 pandemic — had no recourse when Cincinnati offered Hilton a four-year, $24 million contract.

It was the same with guard Matt Feiler and left tackle Alejandro Villanueva, who both walked in free agency for $7 million-a-year deals elsewhere for Los Angeles and Baltimore.

While the Bengals, Chargers and Ravens spent money to address roster shortcomings, the Steelers were forced by the economics of the NFL to make unenviable choices to get under the cap.

That included bringing back Ben Roethlisberger on a reduced salary, cutting cornerback Steven Nelson and linebacker Vince Williams (who later returned at a smaller cap hit only to retire at the end of training camp), investing heavily in the draft and searching the waiver wire to fill in the holes.

It left them with a very narrow path to contention: hope the rookie-laden offense could take some of the pressure off the 39-year-old Roethlisberger to do it all and pray the defense picked up right where it left off in 2020 when it ranked first in sacks and turnovers and third in yards allowed.

For a month, it worked. Roethlisberger and the offense shook off a shaky start — thanks in large part to the rapid development of rookie stars Najee Harris and Pat Freiermuth — and the Steelers surged into contention with a four-game winning streak against teams of varying pedigree.

Heading into December, that progress looks like a mirage.

Injuries, particularly along the defensive line, have exposed an overall lack of quality depth up front on both sides of the ball. And the sight of Hilton racing to the end zone for a 24-yard Pick-6 at the end of the first half of what became a 41-10 beatdown at the hands of Cincinnati on Sunday showcased the kind of energy and playmaking the Steelers (5-5-1) are sorely lacking.

“There’s a lot of football to be played, but if we do what we did out there today, we won’t win another game,” defensive lineman Cam Heyward said.

Not if they can't be competitive along the line of scrimmage, something they weren't against the Bengals. Cincinnati ran up 198 yards on the ground. It's telling of how beat up Pittsburgh's defensive line is that rookie fifth-round pick Isaiahh Lowdermilk and not injured starters Stephon Tuitt and Tyson Alualu was the one futilely chasing Bengals quarterback Joe Burrow to the end zone in the first quarter.

Loudermilk was supposed to have a limited role this season if he had one at all. With Alualu out for the year and Tuitt still recovering from knee surgery, Loudermilk found himself playing 27 snaps in a pivotal late-November road game against a division rival.

He was hardly the only Steeler with limited experience thrust into a position they might not have been ready for.

The list of players who saw the field for at least 10 defensive snaps on Sunday included defensive lineman Henry Mondeaux, linebackers Taco Charlton and Derrek Tuszka and cornerbacks Arthur Maulet, Ahkello Witherspoon and James Pierre, none of whom figured to be a significant part of the “division of labor” to borrow a pet phrase of coach Mike Tomlin when Pittsburgh opened camp back in July, if they were even on the roster at all.

Yet the Steelers had little choice to throw them into the mix because they had no money to go hunting for quality depth back in the spring.

Their best-case scenario heading into 2021 was to hope veterans such as Alualu could stay healthy, minimizing the exposure of backups who were not ready for extended playing time.

Instead, the defense has been hit with injuries to high-profile players such as Alualu, Tuitt, star edge rusher T.J. Watt and defensive back Joe Haden. The subs — while playing hard, according to their teammates — have not been up to the challenge of being competitive against good teams.

“We can’t keep playing like this,” said Watt, who went onto the COVID-19 list on Monday, making his availability to face the Ravens next Sunday uncertain at best. "It’s absolutely embarrassing.”

And perhaps unfixable, at least in 2021.

Not much. Even any minor sign of progress came at a cost. Freiermuth made a pretty touchdown reception in the fourth quarter of a blowout only to leave the game while being checked for a concussion.

Everything, though the defensive line is first among equals in that department with Baltimore and the NFL's third-ranked rushing offense coming to Heinz Field.

Kicker Chris Boswell remains perfect at Paul Brown Stadium, making all 24 of his field-goal attempts there in his career.

The coaching staff keeps challenging inside linebacker Devin Bush, and he keeps failing to meet it.

Inside linebacker Robert Spillane is dealing with a knee problem. There's hope Haden's sprained foot will be ready in time to face the Ravens.

0-7 — Pittsburgh's record in its past seven games decided by more than one score, highlighting how small the team's margin for error has become.

Try to salvage their season by shoring up the defense in time to keep Baltimore star QB Lamar Jackson in check. Jackson is just 1-1 against the Steelers as a starter.