Steelers suddenly on the skids after dismal loss to Buffalo 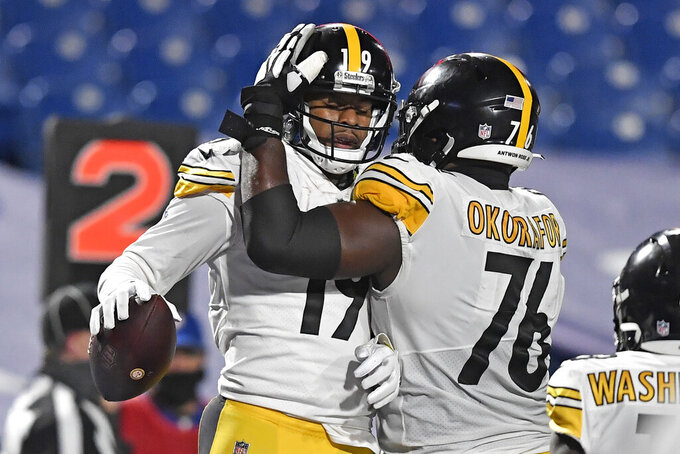 The Pittsburgh Steelers are heading to the playoffs. They are also heading in the wrong direction.

In the span of six days, Pittsburgh saw its unbeaten season and its spot atop the AFC vanish. Any chance of a deep playoff run may be fleeting too after a 26-15 loss to Buffalo on Sunday night that included more injuries, more ineffective play by a sputtering offense, and more questions than answers.

Not if the Steelers (11-2) want to make their stay in the postseason an extended one. The return of running back James Conner and center Maurkice Pouncey did little to resuscitate the running game. Conner ran for just 18 yards on 10 carries and the Steelers managed 47 yards rushing total, the fifth time in the last seven games they finished with under 50 yards on the ground.

As a result, they were forced to rely on the short-passing game Roethlisberger ran with such efficiency earlier in the season. Not so much anymore. Roethlisberger completed 21 of 37 passes for 187 yards and two touchdowns to go with two interceptions, including a Pick Six by Taron Johnson late in the first half that gave Buffalo a lead it never flirted with giving away.

The return put the Bills up 9-7. By the time Pittsburgh recorded its next first down, the Steelers trailed 23-7. Pittsburgh converted just 1 of 10 third downs, held the ball for just 24:15 and failed to sustain any momentum when it mattered.

The drops that have plagued the wide receivers of late popped up again, with head coach Mike Tomlin briefly benching Diontae Johnson after a couple of easy catches went right through his hands. Johnson rebounded a bit in the second half but it was far too little, far too late.

The loss, coupled with an upset defeat at home to Washington on Monday, dropped Pittsburgh to second in the AFC behind defending Super Bowl champion Kansas City. Though the Steelers have the inside track for the AFC North title over Cleveland, the way they've played of late has left the door ajar. And they know it.

“We’ve lost two,” Roethlisberger said. "We’re facing some adversity. But we’re not hitting the panic button. Offensively we’re not very good. We’re not playing good football and it starts with me.”

Not entirely. Guard Matt Feiler went down in the first half with a pectoral injury and rookie Kevin Dotson — Feiler's replacement — soon followed with a pectoral injury of his own. That forced J.C. Hassenauer, a center by trade, to fill in at left guard. The line allowed Roethlisberger to take his first sack in a month and didn't get nearly enough push to give Conner, Jaylen Samuels or Benny Snell much room to maneuver.

The defense did what it could for a half to pick up the slack. Blitzing Buffalo's Josh Allen relentlessly, the Steelers forced a pair of early turnovers, one of which set up a touchdown pass from Roethlisberger to James Washington. Pittsburgh also set an NFL record by collecting at least one sack in its 70th consecutive game.

Yet once Allen settled in, the holes in a defense decimated by injuries became exposed.

The Steelers played without starting cornerback Joe Haden (concussion) and starting inside linebackers Robert Spillane (knee) and Vince Williams (reserve/COVID-19 list). Once Allen found time to let his receivers get open, he picked Pittsburgh apart. Regularly teaming up with Stefan Diggs, Buffalo dominated the second half.

“We played like crap today,” defensive tackle Cam Heyward said. "As simple as that. We can talk about our defense in the first quarter but after that, it went to hell. We’ve got to figure out what we’re doing.”

And do it relatively quickly. Pittsburgh travels to Cincinnati next week in what looks like a relative breather — the Steelers have won each of the last 11 meetings with the Bengals — before a closing stretch that starts with a home game against Indianapolis (9-4) and a trip to Cleveland (9-3) to close out the regular season.

By then, they could have the AFC North sew up and their seeding assured. Or they could still be in a tailspin. Seasons are remembered in Pittsburgh for how they end, not how they start. That 11-0 run is over. The real litmus test begins now.

“If I don’t play good enough football, then I need to hang it up,” Roethlisberger said. "I still feel like I can do enough teams to help this team win football games and I’m going to do what I can to get us back on track.”