Still-viable Vikings making season harder than it has to be 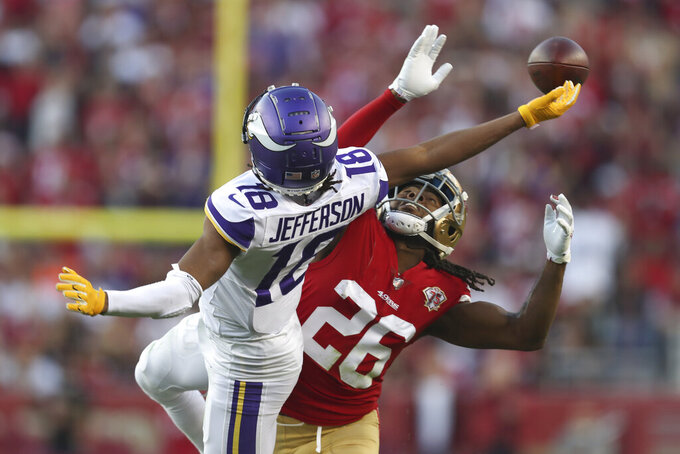 MINNEAPOLIS (AP) — The Minnesota Vikings have been as relentless as any team in the league this year, with all six of their defeats decided by one score.

Each time they've teetered on the edge of being done for, in a game or in this season, they've confidently and defiantly rallied.

The problem is they've put themselves in most of these pressure-packed situations. There's not much room left on the schedule to keep proving their resilience — and fewer important players available to help. Running back Dalvin Cook was the latest to be injured.

After losing 34-26 at San Francisco on Sunday, the Vikings (5-6) remained firmly in the NFC wild-race race. They'll also take a losing record into the week for the ninth time in 12 games in 2021.

“No matter what happens, nobody’s panicking, nobody’s pointing fingers, nobody’s down,” wide receiver Adam Thielen said on Monday. "Everybody’s just like, ‘All right. Let’s go. It’s time to go. We’ve got to fight.’ It’s pretty cool to see that because, now being nine years in the NFL, I’ve been in situations where it’s not always like that.”

The six losses have come by a total of 26 points. The Vikings are one of only 17 teams in the 57-season Super Bowl era of the NFL that have taken a lead of at least seven points in each of their first 11 games. The first 16 teams to do so combined for an .852 winning percentage. None of them had a losing record.

The Vikings toyed with contention in 2020 despite starting 1-5, only to be eliminated in their second-to-last game and finish 7-9.

“I feel a lot different about this team than I did at this time a year ago,” coach Mike Zimmer said. "They’ve shown they have a lot of heart and fight. We’ve basically been in every ballgame, could have won several others, so we’ll just play it out and see where it goes.”

The Vikings, after holding two straight opponents under 100 rushing yards for the first time this season, had their replacement defensive line trampled for 208 yards on 39 attempts by the 49ers. That was one of those familiar games for Minnesota where Kirk Cousins, who's by and large been having an excellent season, needed to be near-perfect to win — and wasn't.

Pass protection: Cousins was sacked only once by the 49ers, who took him down behind the line of scrimmage six times in the division round playoff game that ended Minnesota's 2019 season. The Vikings have the second-best sack allowance rate in the league (3.67% per pass attempt). Rookie Christian Darrisaw's seamless slide into the starting lineup has given the Vikings a solid young pair of tackles with Brian O'Neill.

The defense in the final two minutes of the first half: This is a very specific and seemingly fixable problem, but the 66 points allowed in that situation is the most by any NFL team this century through 11 games. The 49ers reached the end zone with 18 seconds left before halftime after a 15-play, 85-yard drive.

Kene Nwangwu: The fourth-round draft pick from Iowa State, who didn't debut until the seventh game of the season because of a knee injury he suffered in the first exhibition game, has taken two of his eight career kickoff returns for touchdowns. The rookie is the first player in the NFL with multiple kickoff return scores in six years since Cordarrelle Patterson had a pair for the Vikings.

With Cook likely out for awhile, Nwangwu could also carve out a role in the backfield behind Alexander Mattison.

“I think there’s a chance that he may end up getting some more playing time,” Zimmer said.

Anthony Barr: The eighth-year linebacker left in the third quarter with a hamstring injury, the same muscle that cost him three games in 2018. Barr has missed 19 of the past 25 games and could be bound for another absence.

“Anthony loves to play, and when he’s hurt, it hurts him more than it hurts us," Zimmer said.

4.83: The average yards per rush allowed by the Vikings this season, the worst mark in the league and the third-worst rate in franchise history. Only the 1961 (5.41) and 2003 (4.86) teams had a higher rushing average against them.

Cook (shoulder) left the game shortly after Barr on a cart in significant pain. Zimmer said Cook's status was day to day, stopping short of confirming a long-term absence.

Cornerback Patrick Peterson on Monday became the latest player to land on the COVID-19 list, putting his status for this week in doubt.

The Vikings will have an opportunity to use those games to develop more depth on defense while simultaneously strengthening their standing in the wild-card race. They'll also be in position to maintain a productive rushing attack without Cook, with the Lions, Steelers and Bears ranked 28th, 29th and 22nd in the league in rushing yards allowed per game.