Streaking Titans put themselves game back of AFC South lead 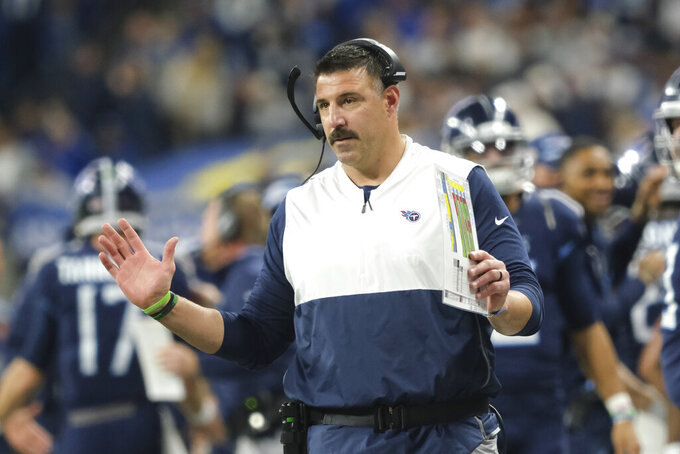 Tennessee Titans head coach Mike Vrabel gestures on the sideline during the first half of an NFL football game against the Indianapolis Colts in Indianapolis, Sunday, Dec. 1, 2019. (AP Photo/AJ Mast)

NASHVILLE, Tenn. (AP) — Tennessee coach Mike Vrabel has no plans to talk about the standings with his Titans and where they fit in the NFL picture.

Sure, his Titans (7-5) have won three straight and five of their last six to pull within a game of Houston (8-4) in the AFC South, tied with Pittsburgh (7-5) for the final wild card. The Steelers have the tiebreaker with a better record against AFC teams.

Vrabel’s approach is to act like the Titans have been here before, with most of his players having won at least seven games in a season before now.

That might be true most seasons, but the Titans are coming off a big 31-17 win over the Colts in a series in which they had lost 19 of the previous 22.

“We just have to keep things going,” said Ryan Tannehill, now 5-1 as Tennessee’s starting quarterback. “We’re on the right path right now. Just keep our heads down, keep working and get ready for the next one.”

Special teams. Tennessee has blocked four field goals this season, including two in the win over the Colts, to lead the NFL in that category. Joshua Kalu’s block sealed a win over the Chiefs on Nov. 10, while Dane Cruikshank’s block set up Tye Smith’s 63-yard return for a touchdown vs. Indy.

“Now I hope we expect to block one every week,” Vrabel said.

Pass blocking. The Titans hadn’t allowed Tannehill to be sacked more than four times in any of his starts until Indianapolis got five sacks by halftime, with a sixth in the second half. The Titans are tied for last in the NFL in sacks allowed (49), with Tannehill now sacked almost as much in his six starts (24) as Marcus Mariota (25) before being benched in his sixth start.

Worse, Tannehill has been sacked and lost a fumble in each of the last two games.

Still Derrick Henry. He became the fifth player in NFL history to run for at least 145 yards and a touchdown in three straight games, finishing with 149 yards after a fumble on his first carry. The Titans have won all three, and Henry’s best season yet has him now third in the NFL with 1,140 yards rushing.

Kicker Ryan Succop. The veteran connected on his first field goal of the season against the Colts, but the Titans turned kickoff duties over to newly signed kicker Ryan Santoso. He had a touchback on five of his six kickoffs.

Cornerback Adoree’ Jackson grabbed his knee during the win in Indy, but had ice on his foot. Vrabel said an injury update will come Wednesday. The Titans already are thin at that position with Malcolm Butler on injured reserve. LeShaun Sims’ right ankle kept him from playing the Colts.

1 — That’s what separates the Titans from the top of the AFC South after a 2-4 start, with two to play against Houston.

The Titans can’t afford to peek ahead to Dec. 15 when they host Houston. Not with a trip to California to play Oakland (6-6) up first. A win Sunday will raise the stakes for that Texans visit. The Titans wrap up their home schedule against New Orleans before a trip to Houston on Dec. 29 with possibly the division title or a wild-card berth on the line.