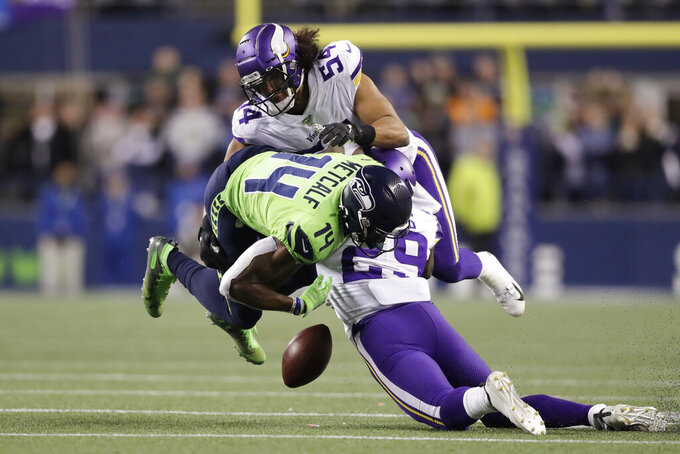 Seattle Seahawks' DK Metcalf (14) fumbles while being hit by Minnesota Vikings' Xavier Rhodes (29) and Eric Kendricks (54) during the second half of an NFL football game, Monday, Dec. 2, 2019, in Seattle. The Vikings' recovered on the play. (AP Photo/John Froschauer)

MINNEAPOLIS (AP) — In the snapshot of how and when the Minnesota Vikings let their critical game at Seattle slip away, Xavier Rhodes was squarely in the frame.

The struggling seventh-year cornerback said Wednesday he's sorry about the way he handled the attention.

Late in the third quarter, with the Seahawks leading 20-17, Rhodes was positioned across from wide receiver David Moore. With strong safety Harrison Smith lined up on the edge to show a potential blitz, Rhodes had no help behind him. He initially backpedaled as if he did, though. By the time he realized he was solely responsible for Moore, who ran a go route, Rhodes could only hope for a drop to prevent the 60-yard touchdown pass from Russell Wilson.

When Rhodes reached the sideline, he traded heated words with coach Mike Zimmer, then slammed his helmet to the turf two different times. When linebacker Anthony Barr approached, Rhodes brushed him aside and stormed off.

“That's not the way I should carry myself, especially as a leader on this team," Rhodes said. “I apologize definitely to coach Zim, and the things he's taught me, I should never react that way toward him or toward my team period. I know my role. I need to play it better."

Rhodes took the blame, too, for the blown assignment on the play.

“I was supposed to be at a certain spot at a certain time, and I wasn't there," said Rhodes, who was an All-Pro pick in 2017.

As long as he was at it, in an earnest session with reporters in the locker room prior to practice, Rhodes raised his hand in guilt over the penalties he's been called for this season as well. He's tied for the NFL lead among defensive players with 10 flags. Eight of them have been accepted for a league-most 139 yards against the Vikings, and no defensive player has been the cause of a greater percentage of his team's penalty yardage than Rhodes, according to data compiled by the NFL Penalty Tracker website.

“I'm just at a place right now where I feel like I can do better, and I can help my team out much more. We can be in better situations and make the game a lot easier," said Rhodes, who forced a fumble in the fourth quarter that helped the Vikings rally from a 17-point deficit before ultimately falling 37-30.

The 29-year-old has appeared on the injury report three times this season, with elbow, hip and knee trouble, but he has yet to miss a game.

“It's no excuse. When I'm out there on that field, everything I'm battling has to go away. I have to go out there and play for the guy beside me, because I know if I mess up like I messed up on that one play, that's what it's going to lead up to," Rhodes said.

Perhaps more than some players with his credentials would, Rhodes acknowledged his decline in performance the past two seasons, a drop-off this year that has mirrored an overall slip by Minnesota's pass defense.

“I'm there in coverage. I’m just not getting there or getting the ball out," Rhodes said. “But I’m a fighter. At the end of the day, that switch is going to flip. And once it happens, it’s going to happen. But right now I’m going to continue to play my ball, work on the mental errors I’m doing."

Zimmer refused to analyze Rhodes' performance, when asked Wednesday, but he seemed to be pleased by the contrition expressed by his most experienced cornerback.