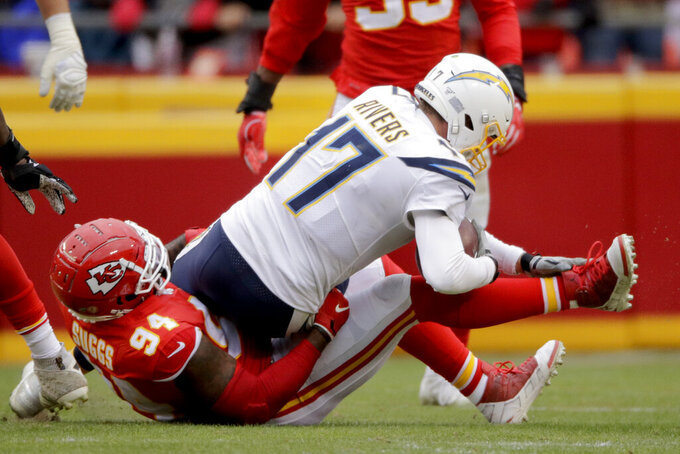 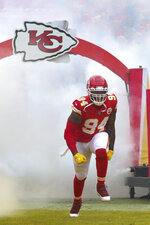 KANSAS CITY, Mo. (AP) — There was a moment during practice last week, while the Kansas City Chiefs were prepping for their AFC title game against Tennessee, that caused linebackers coach Matt House to seek out defensive coordinator Steve Spagnuolo.

It had to do with pass rusher Terrell Suggs, and it was just too good to let go.

“He said, ‘Wow, T-Suggs was just over there talking about this technique we do and he just put on a clinic,'" Spagnuolo recalled Thursday afternoon. “All the linebackers, nobody said anything. They just watched.”

Surprising given that Suggs has only been with the Chiefs for about a month.

Not at all surprising given that the 17-year veteran has earned his stripes during a long career spent primarily with the Baltimore Ravens, where he not only reached the Super Bowl but won it after the 2012 season. In a strange coincidence, the opponent happened to be the San Francisco 49ers, whom Kansas City will face in Miami in less than two weeks.

This is exactly what Suggs hoped for when the Arizona Cardinals waived him late in the season.

The Chiefs had just lost their second defensive end to a season-ending injury, and they were desperate for some help to pair with pass rusher Frank Clark. They never could have guessed it would come in the form of a former All-Pro and seven-time Pro Bowl selection who had 138 sacks and more postseason experience than anyone on their roster.

There were reports that Suggs was initially skeptical of joining the Chiefs, preferring instead to return to the Ravens and help them down the stretch. But all it took was a look at the roster — quarterback Patrick Mahomes, wide receiver Tyreek Hill and tight end Travis Kelce on offense, and Clark and safety Tyrann Mathieu on defense — and an honest, heart-to-heart talk with coach Andy Reid to convince T-Sizzle to bring his, well, sizzle to the AFC West champions.

“It didn't take much convincing,” Suggs said. "This team is pretty vet-savvy. Having been in this position a few times, you learn more from failure than you ever would from success. I think that the things that have happened in years past kind of prepared this team for the task that it took. It also doesn't hurt to have the reigning MVP, and definitely the best tight end in the game, on your team. Once they got rolling and clicking on all cylinders, we got to have fun out there."

Indeed, it didn't take long for Suggs to get rolling. He joined the team early in Week 16 and played about a quarter of the defensive snaps in a win at Chicago. He upped that number to about half the following week against the Chargers, when a win by the Chiefs coupled with a loss by the Patriots gave the No. 2 seed and a first-round playoff bye.

Suggs has continued to play about the same amount the past two weeks, helping to corral Texans quarterback Deshaun Watson in the divisional round and shut down Titans running back Derrick Henry in the AFC title game.

His value doesn't just lie between the sidelines, though.

It lies on the sideline.

The 37-year-old Suggs has seen just about everything during the course of his career, and he's eager to pass along that knowledge to the next generation. The scene that played out at practice last week was but one example of Suggs taking a defensive player — or a bunch of them, in that case — to the side and giving them some pointers that often resonate with players far more than if they were coming from a coach.

“He's a true veteran,” Mathieu said. “I think he has a lot of that championship swagger. He comes to work every day. Always taking notes. I can remember a few plays in the (Texans) game where he was scrapping down the ball and looks 28.”

After the Chiefs took care of the Titans last weekend, Suggs became the go-to player in the locker room for tips on dealing with the Super Bowl, whether it was the daunting crush of media obligations, the countless friends and families trying to get tickets or secure flights, or the actual challenge of preparing for the biggest game in professional football.

“Just talking to those guys and seeing what the week is like, first of all,” Chiefs quarterback Patrick Mahomes said. “It helps to have those guys and their experiences to understand what we're getting into and what to expect.”

As for Suggs, he never could have pictured himself playing in another Super Bowl when he was struggling through the season in Arizona a few months ago, or even when he joined the Chiefs midway through last month.

NOTES: Kelce and SS Jordan Lucas did not practice Thursday because of an illness. ... The Chiefs will practice on Friday before getting Saturday off to take care of travel preparations. They head to Miami on Sunday. ... Spagnuolo, who twice was the defensive coordinator for the New York Giants and later served as interim coach, said he had “just good thoughts” when asked about QB Eli Manning's retirement. “I think the world of Eli. I'm happy for him,” Spagnuolo said. “Had a tremendous career. I was lucky to be with him and share in the ultimate moment, so I wish him the best.”