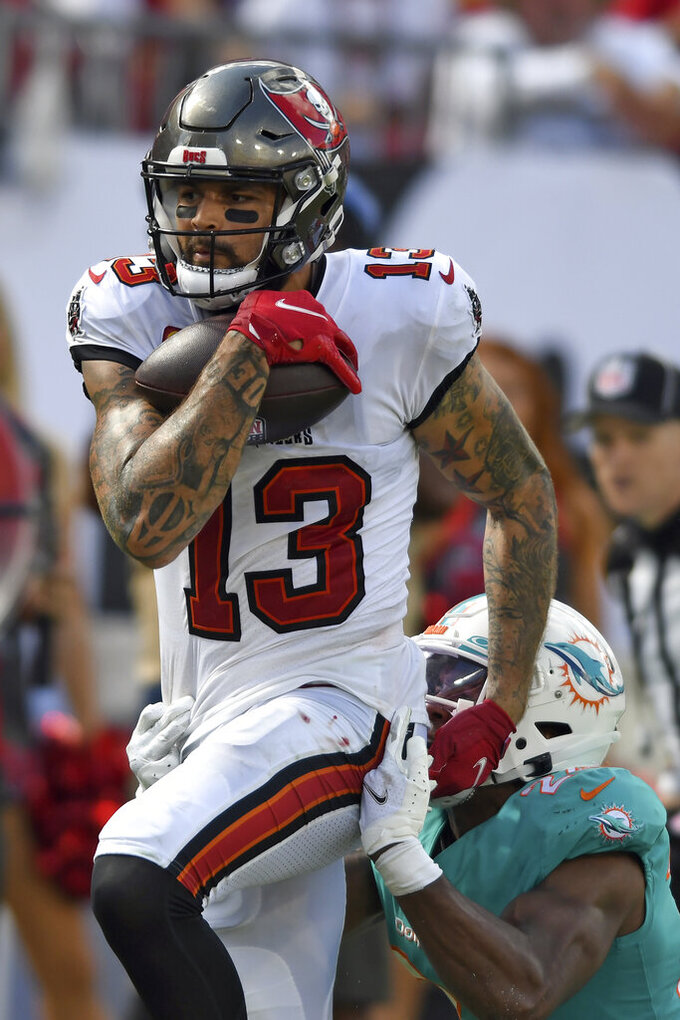 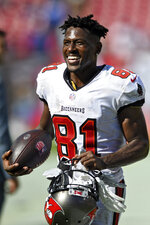 TAMPA, Fla. (AP) — So much for the prospect of complacency creeping into the Tampa Bay Buccaneers, who are off to a 4-1 start and not showing any signs of being satisfied with the way they’ve performed this season.

Yes, the Tom Brady-led offense was virtually unstoppable, while the defense limited an opponent to 17 points for the second straight week, in a 28-point rout of the Miami Dolphins. Coach Bruce Arians and his players say the defending Super Bowl champions are capable of being so much better.

“We still have a lot to improve on,” linebacker Jason Pierre-Paul, who returned to lineup against Miami after missing two games with shoulder and hand injuries, echoed.

“I think us as a defense, people don’t respect us like they should,” Pierre-Paul said. “In order for them to do that, we have to go out there and prove we are nothing to mess with. I don’t think we have proved that yet.”

Brady has thrown for 15 touchdowns vs. two interceptions through five games. He continues to find ways to spread the ball among a talented group of playmakers. Mike Evans, Chris Godwin and Antonio Brown are all on track to finish with 1,000 yards and double-digit touchdowns receiving. The trio of receivers combined for 20 catches and 307 yards against Miami, with Evans and Brown each topping 100 yards with two TDs apiece.

“We are just excited about our opportunity. Each one of our guys could be the reason we win,” Brown said of the depth at his position. “We are all unselfish, and we know the greater cause is winning. Our business is winning, and we are just here to inspire each other and win the ballgame.”

After six offensive possessions ending inside New England’s 30-yard produced one touchdown in a 19-17 victory over the Patriots two weeks ago, the Bucs were much more productive (4 of 6, 67 percent) against Miami.

“Last week’s red zone was kind of an anomaly,” Arians said. “This week, we executed much better down there.”

The running game is improving steadily, with Leonard Fournette also becoming more involved in the passing attack. After gaining 138 yards (91 rushing, 47 receiving) yards from scrimmage at New England, Fournette averaged 5.6 yards per carry against Dolphins and finished with 67 rushing and 43 receiving on four catches.

“He’s playing outstanding. He’s always had great hands. He’s taken it on himself to concentrate better in the passing game and see how much of a threat he can be,” Arians said. “Pass protection same thing. He’s become an all-around really, really solid back.”

When you amass 558 yards and limit an opponent to 17 points, there’s not much for a coach to criticize following a 28-point blowout. But despite ranking near the top of the league in passing offense and scoring, Arians has not been happy with the way the defending champs have played coming out of halftime this season. The Bucs were held scoreless in the third quarter Sunday before turning a seven-point lead into a rout with three fourth-quarter TDs.

Brady injured the thumb on his throwing hand some time during the first half against Miami, but remained in the game until midway through the fourth quarter while throwing for 411 yards and five touchdowns.

He wore a bandage on the thumb during his postgame news conference Sunday.

“In my younger days I probably would’ve never showed you guys that I wrapped it up because I probably would’ve tried to keep it a secret. But I think I’m older, so I don’t care as much,” the 44-year-old Brady said. “It’s just a football injury. ... We’ll see what happens.”

“He went through the full practice. ... He looks like he’ll be fine by Thursday,” Arians said.

The Bucs rushed for 121 yards against the Dolphins, including a 13-yard scamper by Brady on the next-to-last play of the first half. The run set up a 60-yard field-goal attempt by Bradley Pinion, who missed the kick wide left.

“Most of the guys in the NFL probably make like 30 yards on a run like that,” Brady added. “I turned a 30-yarder into a 10-yarder better than anybody. But it was good.”

There was little time to celebrate beating Miami with only three days to prepare to play the Eagles.

“It’s a challenge, but they have the same challenge, too,” Brady said.