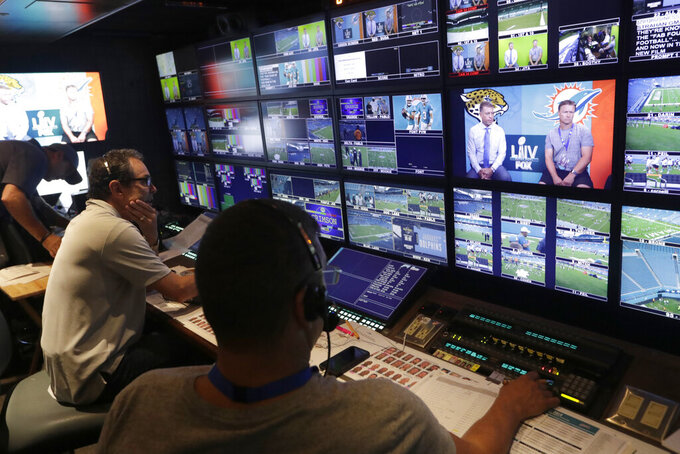 In this Friday, Aug. 23, 2019, photo, Richie Zyontz, producer of Fox Sports, left, works in the Fox TV truck before a preseason NFL football game between the Miami Dolphins and Jacksonville Jaguars, in Miami Gardens, Fla. The exhibition game served as a dress rehearsal for the Fox Sports crew for the upcoming Super Bowl to be hosted by Miami in 2020. (AP Photo/Lynne Sladky)

MIAMI GARDENS, Fla. (AP) — It's two hours before kickoff, and in the Fox TV truck, a large screen shows logos of the Jacksonville Jaguars, the Miami Dolphins and this season's Super Bowl.

That image from last week's preseason game between the Jaguars and Dolphins was likely as close as either team will get to the Super Bowl in Miami in February. But Fox will be there, and the ho-hum exhibition matchup served as a dress rehearsal for the season finale in nearly six months.

"We start our season and end our season here," producer Richie Zyontz said.

Zyontz's crew had never before done a game together in Miami. Play-by-play announcer Joe Buck hadn't been in the stadium since his days as a St. Louis Cardinals radio broadcaster when they played the Florida Marlins. Analyst Troy Aikman was last in the stadium in 1996, when he was the quarterback for the Dallas Cowboys against the Dolphins and Dan Marino.

None will be back for a game in Miami until the Super Bowl, which made the exhibition useful practice.

"It's good for us to come here and get the lay of the land," Buck said. "The two main things I worry about are what are the angles from the booth — how easy is it to see the far sideline — and is there a bathroom close by. There are some stadiums where it's a sprint."

Happily, booth-to-bathroom trips during timeouts are manageable at the Dolphins' stadium, which has undergone a $500 million makeover since it last hosted a Super Bowl in February 2010.

"I think it's awesome," he said. "They've done a wonderful job of making this stadium feel current with the new palaces that have been opened across the NFL."

"They're like science projects," Zyontz said. "There's a super slow-motion camera on one of the pylons in the end zone, and a camera on the yardstick for the chain gang."

There was also a new overhead remote camera for "beauty shots" of the downtown Miami skyline 10 miles away. That camera won't be used again at a game until the Super Bowl.

Many Fox frills will wait until February. There were 16 cameras for the exhibition game; up to 100 will be deployed at the Super Bowl, some just for potential replays.

Before the Jaguars and Dolphins took the field, Buck and Aikman joked about the size of the crowd and their TV audience. By contrast, they said that while covering the Super Bowl is a thrill, there's a lot of pressure due to the intensity of the spotlight.

So they were glad for a practice game.

"The more at ease you can be about other things besides the actual game itself, there's some comfort in that," Aikman said. "Even something as insignificant as the hotel where we're staying — at least now I know how to navigate getting here."