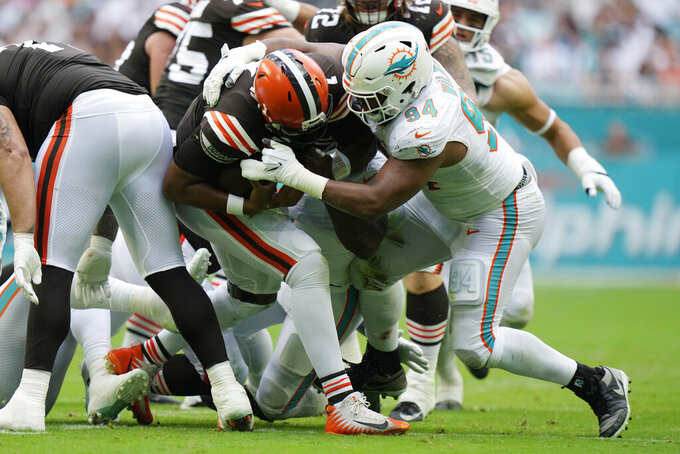 MIAMI GARDENS, Fla. (AP) — The “MVP!” chants for Tua Tagovailoa started early in the second half, and they didn't stop until after the game ended, as Tagovailoa flashed a smile and waved on his way off the field.

Tagovailoa maintained his scorching form since his return from a concussion, throwing three touchdown passes as the Miami Dolphins beat the Cleveland Browns 39-17 on Sunday for their fourth straight win.

In a game that was a blowout by the fourth quarter, Tagovailoa connected with three receivers for his third straight three-touchdown performance.

Since returning in Week 7, Tagovailoa has 10 TD passes and no interceptions. He finished with 285 yards on 25-of-32 passing Sunday.

Miami (7-3) moved into first place alone in the AFC East, overtaking Buffalo, which lost in overtime to Minnesota and dropped into a tie with the New York Jets (6-3) in the stout division.

Tagovailoa said he was flattered by the crowd hyping him as an MVP candidate.

“It would be cool,” Tagovailoa said. “But we have bigger goals and aspirations on what we want to do as a team.”

Jeff Wilson rushed for 119 yards on 17 carries as the Dolphins finished with 491 yards of offense.

The Browns (3-6) scored a touchdown on their opening drive, thanks in part to a 48-yard kickoff return by rookie Jerome Ford, but Miami tied the game on its first possession en route to scoring 24 straight points. Cleveland never got closer than 14 points the rest of the way.

“We really didn’t do any of the things you need to do versus that football team,” Browns coach Kevin Stefanski said.

Cleveland’s Jacoby Brissett completed 22 of 35 passes for 212 yards and one touchdown against one of his former teams. Nick Chubb had 11 carries for 63 yards, including a 33-yard TD run in the fourth quarter. Tight end Harrison Bryant caught the Browns' other TD, a 1-yarder.

Wilson had a 33-yard run on the Dolphins' 10-play, 84-yard opening drive, setting up Tagovailoa, who pump-faked and found fullback Alec Ingold for a 13-yard score.

“We knew they were unique in what they did, and they were going to throw a lot of different looks at us,” Browns defensive end Myles Garrett said. "It really kept us on the back foot, kept us hesitant, and they capitalized on that."

Miami held the Browns to 10 points after Cleveland’s opening drive, sacked Brissett three times and logged its first turnover since Week 7, a fumble by Chubb before halftime.

Bradley Chubb, the Dolphins' newest edge rusher, combined with defensive end Christian Wilkins for a sack in the first half, Chubb's first since being acquired at the trade deadline from Denver.

“It felt good," Chubb said. "It’s only a half. So I can’t feel too good about it, but I just got to keep working. The numbers gonna come, and I’m just excited to be here.”

The Dolphins entered the game ranked 27th in third-down defense and 15th against the run. They held the Browns to 5 of 12 on third down and a season-low 113 rushing yards. Receiver Amari Cooper, coming off a 131-yard game in a win over Cincinnati, was held to three catches for 32 yards.

Jaylen Waddle had four receptions for 66 yards for Miami, and his fellow speedy receiver Tyreek Hill caught five passes for 44 yards, including a 2-yard TD catch in the third quarter that made it 30-10.

Tagovailoa's other TD throw was a 14-yarder to Trent Sherfield with 32 seconds left before halftime, capping an efficient seven-play, 53-yard drive that took just 50 seconds. Sherfield's TD was his first of the season.

“You have some offenses where the ball is not coming to you and you know that,” Sherfield said. “But with a guy like Tua and the offense and how he understands the offense, and the way that he’s able to spread the ball around, you always have to be prepared.”

A week after scoring a rushing touchdown in his Dolphins debut, Wilson had the best performance by a Miami running back this season.

He has 26 carries for 170 yards and two touchdowns since the Dolphins acquired him at the trade deadline from San Francisco.

Wilson’s fourth-down conversion in the first quarter led to Miami’s first touchdown Sunday. He also had runs of 18 and 11 yards on the drive. Wilson capped the scoring with a 20-yard touchdown run in the fourth quarter.

“We got weapons all over this team. And that’s no exaggeration,” Wilson said. “And that’s not because I’m on this team. I even said that when I was on the other side of this too. They’re very explosive. It’s exciting for me to come in and help add on to that.”

The Dolphins distributed 66,563 tickets for the game, the most since Hard Rock Stadium was renovated in 2015.

“That’s a cool stat,” Tagovailoa said. “It just shows you the belief that our fans have in our team and kind of the resurrection of the organization for us. We’re going to try to keep this going after this bye week.”

Browns: At Buffalo next Sunday.

Dolphins: After a bye, will host Houston on Sunday, Nov. 27.