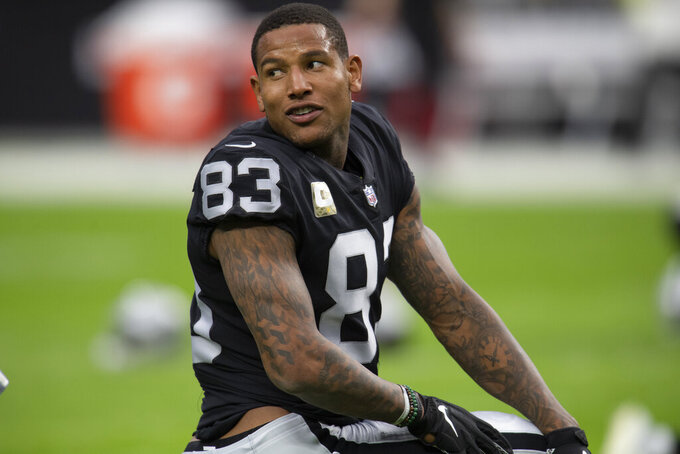 FILE - Las Vegas Raiders tight end Darren Waller looks on before playing the Cincinnati Bengals in an NFL football game Nov. 21, 2021, in Las Vegas. For Waller, the hardest part about his five-week absence for injuries and COVID-19 was not the rehabilitation or the inability to play in crucial games down the stretch for his team. It was all the idle time that was hardest to navigate for a player who battles daily to remain sober after nearly throwing away his career because of drugs and alcohol. (AP Photo/John McCoy, File)

For Las Vegas Raiders star tight end Darren Waller, the hardest part about his five-week absence for injuries and COVID-19 wasn't the rehabilitation or the inability to play in crucial games down the stretch for his team.

It was all the idle time that was hardest to navigate for a player who battles daily to remain sober after nearly throwing away his career because of drugs and alcohol.

“My disease of addiction, that can have me thinking all kinds of crazy things,” Waller said. “I’ve got to make sure that I’m talking about those things when I have all that idle time. I’ve got my therapist, stay going to (Alcoholics Anonymous) meetings. Stayed in the playbook. Working on music. Just staying solid, keeping my head out of that idle time and just into things that I enjoy and stay into the game of football as much as I can.”

Waller made it through that stretch and managed to return to the field for last week's season finale, which sent the Raiders to their second postseason trip in the past 19 years.

Las Vegas will visit Cincinnati on Saturday in the wild-card round, ending a stretch of futility that weighed on everyone in the organization.

“To see this happen now is awesome to see but I'm also not surprised the least bit that we’re here," Waller said. “I believe this is a work in progress over the years. It's awesome to see that happen and build that new culture here. I feel like Al Davis would be proud.”

Waller has been a big part of the turnaround since being plucked off Baltimore's practice squad late in the 2018 season where he was languishing after being suspended twice for violating the league's substance abuse policy.

Waller quickly became a star with the Raiders, catching 90 passes for 1,145 yards in 2019 and then catching a team-record 107 passes for 1,196 yards and nine TDs last season.

Waller hasn't been as productive this season as he missed one game in October with an ankle injury, then five more following a knee injury on Thanksgiving in Dallas and then one more when he tested positive for COVID-19 just when he was ready to return to practice.

Waller has just 55 catches for 665 yards and two TDs on the season but his presence helps open up the offense for other players.

The Raiders were happy to get Waller back last week against the Chargers, even if he only had two catches for 22 yards on nine targets.

“With Darren and I, there was some rust there and some miscommunications and little things here and there that’s easily fixable and easily correctable,” quarterback Derek Carr said. “I mean we’re correcting it on the field kind of thing and all that.”

The Raiders survived the stretch without Waller, winning three straight games before the finale thanks to slot receiver Hunter Renfrow's emergence as Carr's top target, a spark from the running game and an improved defense.

Watching that can sometimes be difficult.

“It’s tough, honestly, because I’m a human being at the end of the day and I’m still trying to shed some of my old thinking patterns,” he said. “So, when I’m not out there, I can think these thoughts of, ‘The team is balling without me being in there. Am I useless?’ Just these irrational thoughts. It is tough for me.”

But Waller said he has learned how to deal with those doubts and knows he plays a role even when he's not playing and is able to remain locked in on his task.

And his teammates and coaches know how important he is.

“We all know he’s a great player,” offensive coordinator Greg Olson said. “We’ll continue to target Darren as we move forward as long as he’s up and he’s healthy and he’s playing for us, then we’re going to target him. He’s a difficult player to defend and I think everybody understands that.”