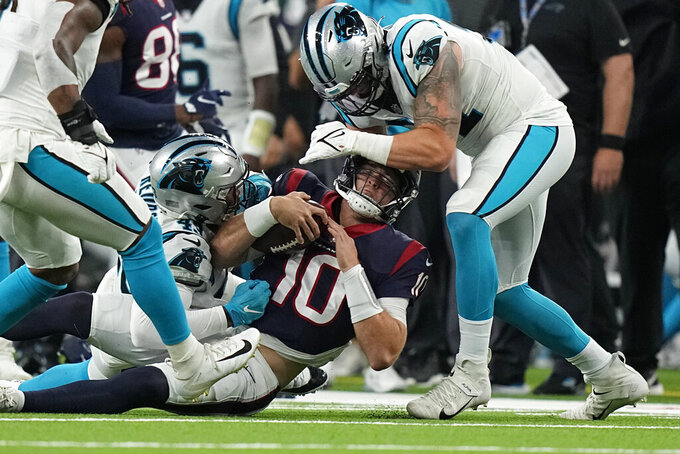 OPENING LINE: Buffalo by 15 1/2, according to FanDuel SportsBook.

TURNOVER DIFFERENTIAL: Bills plus-3; Texans plus-3.

TEXANS PLAYER TO WATCH: QB Davis Mills was 19 of 28 for 168 yards and a touchdown in his first career start last week with former Bills starter Tyrod Taylor out with a hamstring injury. Coach David Culley believes the Texans played too conservatively against the Panthers to try and protect Mills. But Culley says Mills showed he can handle a lot more, so that won’t be the case this week.

BILLS PLAYER TO WATCH: 2020 All-Pro WR Stefon Diggs has 19 catches for 191 yards and a TD, but has yet to top 70 yards receiving in his first three games. After QB Josh Allen focused his attention on Cole Beasley and Emmanuel Sanders last week, don’t think he’s forgotten about his favorite target from last season.

KEY MATCHUP: Mills vs. Bills' defense. Buffalo hasn’t been kind to quarterbacks with 16 or fewer career starts. The Bills are 9-0 in that category since the start of the 2019 season, not including a 35-0 win over Miami in Week 2, when Tua Tagovailoa was sidelined in the first quarter. In those nine wins, Buffalo has allowed an average 215.5 yards passing, a combined 10 TDs passing with 24 sacks and 13 interceptions.

KEY INJURIES: Texans WR Danny Amendola will likely miss his second straight game with a thigh injury. CB Terrance Mitchell, who sustained a concussion against the Panthers, is also dealing with an illness and could sit out Sunday. C Justin Britt was limited in practice this week but is expected to play. S Justin Reid could miss his second straight game with a knee injury. ... Bills starting S Jordan Poyer (left ankle) and starting left guard Jon Feliciano (concussion) have been ruled out. Nickel cornerback Taron Johnson is listed as questionable with a groin injury.

SERIES NOTES: The Texans have won five of the last six meetings, including their wild-card playoff matchup in which Houston rallied from a 16-0 third-quarter deficit. ... The retooling Texans, however, have just 12 players remaining from their 2019 roster, including QB Deshaun Watson, who has been listed as inactive/not injury-related following his trade request and after 22 women filed lawsuits alleging sexual assault or harassment. ... The Bills, by comparison, have 27 remaining on their roster from 2019. ... The teams are 2-2 in games played at Orchard Park, New York.

STATS AND STUFF: Texans first-year coach Culley and Bills coach Sean McDermott and defensive coordinator Leslie Frazier were assistants on Andy Reid’s first staff in Philadelphia in 1999. ... Culley spent the 2017-18 seasons in Buffalo as the team’s quarterbacks coach. ... The Texans have five takeaways through three games after finishing last season with just nine. ... RB Mark Ingram needs 29 yards rushing to reach 7,500 for his career. His 7,471 career yards rushing and 63 rushing touchdowns lead all active players. ... WR Brandin Cooks leads the AFC and is third in the NFL with 322 yards receiving. ... LB Zach Cunningham had a season-high 14 tackles last week and leads the NFL with 191 tackles since the start of last season. ... LB Christian Kirksey had 10 tackles last week and has had a tackle for loss in four of his past five games. ... CB Vernon Hargreaves had eight tackles last week for his sixth straight game with at least five tackles. ... Bills QB Allen has 101 career touchdowns (including one receiving), leaving him one shy of matching Jack Kemp for third on the team list among quarterbacks. ... With 358 yards and four TDs passing last week, Allen became the NFL’s fifth player with at least five 300-yard, four-TD outings in his first four seasons. Kurt Warner and Andrew Luck are tied for third on the list with six games each. ... With 491 career receptions, WR Cole Beasley is nine shy of becoming just the ninth undrafted player with 500 catches. ... Buffalo has generated 20 or more first downs in each of its past 19 games dating to the start of last season. ... LB Matt Milano’s six tackles for a loss are tied for the NFL lead with Denver’s Von Miller. ... The Bills have held six of their past seven opponents to under 300 yards offense, including the first three weeks of this season.

FANTASY TIP: It’s only a matter of time before Diggs makes a larger impact. A year after becoming Buffalo's first player to lead the NFL in yards receiving and catches, Diggs has an opportune chance to find holes in Houston’s Tampa-2 defensive system.