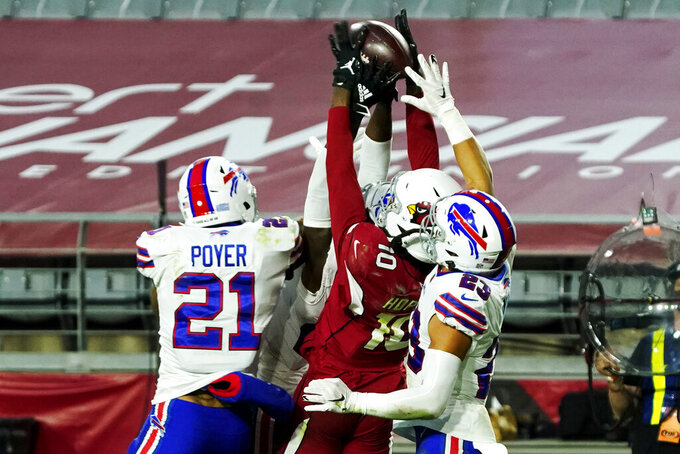 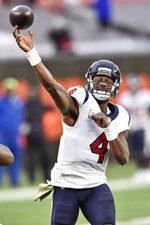 HOUSTON (AP) — The Houston Texans lost their seventh game of the season on Sunday in an all-around bad performance against the Cleveland Browns.

Hours after the game, the franchise took another loss when NFL fans everywhere revisited fired coach/general manager Bill O’Brien’s trade of DeAndre Hopkins after the star receiver made the catch of the year to give the Cardinals a win over Buffalo.

The TD grab by Hopkins, on a Hail Mary in a sea of three defenders, led to thousands of tweets and posts on other social media mocking and criticizing the team and O’Brien for letting Hopkins go and not even getting a first-round pick in return.

O'Brien, who was let go after Houston started 0-4, traded Hopkins in March for running back David Johnson, second-round pick this year and a fourth-round selection in 2021.

The epic catch was even more difficult for Texans fans to stomach since it came on a day when Houston had its worst offensive performance of the year. The team was held to a season lows in points (seven), total yards (243) and yards passing (153) in a game played under windy and difficult weather conditions that limited Deshaun Watson’s ability to throw.

The Texans haven’t ran the ball effectively all year and that didn’t change on Sunday when they managed just 90 yards rushing while the Browns piled up 231 yards on the ground. Houston started backup running back Duke Johnson with David Johnson out with a concussion.

David Johnson’s injury is the latest setback in a terrible season for him since the trade. He averaged just 51 yards rushing through the first eight games in a season where Houston ranks 31st in the NFL in yards rushing a game.

Despite his team’s struggles, Watson remains optimistic and is focused on trying to get the Texans on track.

“Keep my head held high. Keep working,” he said. “Keep trying to encourage and stay as healthy as possible. Nothing is going to change, at least on my end.”

It’s difficult to pick anything that worked against the Browns. But interim coach Romeo Crennel is confident that Watson and the passing game will bounce back this week after struggling in the weather this weekend. Watson ranks eighth in the NFL with 2,539 yards passing this season and has thrown nine TDs without an interception in the past four games.

Of all of Houston’s problems, the biggest one continues to be its inability to stop the run. The Texans allowed both Kareem Hunt and Nick Chubb to rush for more than 100 yards on Sunday. It was the third time this season where they’ve allowed more than 200 yards rushing, leaving them ranked last in the NFL by giving up 167.4 yards rushing a game. Crennel believes his team will improve in this area if the guys focus on consistency.

“We just have to have to get to the point where we are disciplined and focused all the time and understand that it’s not a one-man show," Crennel said. “It takes the whole unit really to stop the run."

Tight end Pharaoh Brown scored his first NFL touchdown on Sunday on a 16-yard pass from Watson. Brown was cut by Cleveland on Sept. 7 and signed to the practice squad in Houston a week later. He was elevated to the active roster on Sept. 15 and has appeared in seven games this season but hadn’t made much of a contribution until his score this weekend.

Duke Johnson managed just 54 yards rushing in his first start of the season. The Texans will have to rely on him to carry the running game for now with David Johnson out indefinitely recovering from a concussion.

LB Jacob Martin, who tested positive for COVID-19 two weeks ago, was cleared to return to the facility on Monday and should be available for Sunday’s game.

92 — LB Zach Cunningham ranks second in the NFL with 92 tackles. He’s been Houston’s most consistent defender this season and has six games with at least 10 tackles.

The Texans will try to shore up their run defense this week before facing a New England team that ranks third in the league by averaging 161.1 yards rushing a game. Houston will not only try and slow Damien Harris, who leads the team with 471 yards rushing, but also attempt to limit Cam Newton’s scrambling. He ranks second in the NFL among quarterbacks with nine rushing touchdowns this season.