Texans struggle to protect Watson in 21-7 loss to Colts 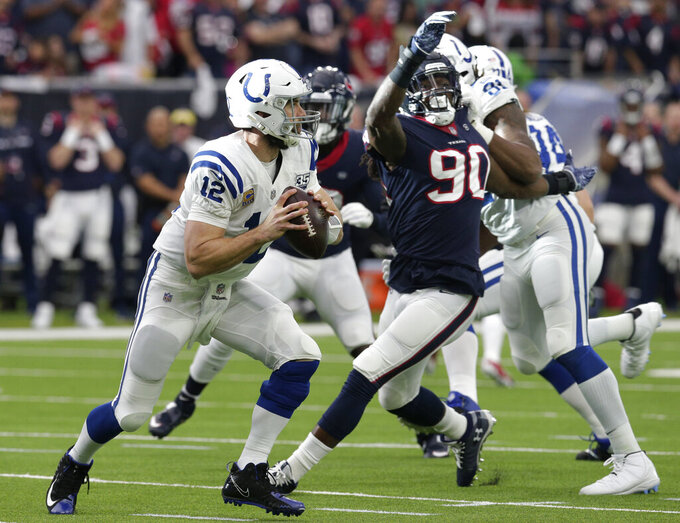 HOUSTON (AP) — Deshaun Watson was sacked more than any other quarterback during the regular season.

Houston's struggles to protect him continued in the wild-card game on Saturday and it contributed to a 21-7 loss to the Indianapolis Colts.

Watson, who was sacked 62 times in the regular season, was sacked three times and hit eight more times in a disappointing playoff debut. He finished with 235 yards passing with a touchdown and an interception.

He addressed the pass rush when he was asked about some low throws he made on Saturday.

"The pressure was there," he said. "I couldn't step into my throws. It wasn't where I was sitting there by myself with a full pocket. Guys were in my face and I was trying to make throws like that."

"I don't think any quarterback can step into that throw and get their full strength and their lower body into it," he continued. "A lot of balls can be low. That was it, really."

Houston's passing game was also hampered by a shoulder injury to star receiver DeAndre Hopkins in a first half where they fell behind 21-0. Hopkins was second in the NFL with a career-high 1,572 yards receiving in the regular season, but was limited to five catches for 37 yards on a day he said that he sustained a Grade 3 AC strain of his right shoulder.

Hopkins acknowledged it being difficult to play through his injury and was in so much pain after the game that he winced repeatedly during the simple task of trying to zip his jacket.

"I'm very disappointed," he said. "That's a good team that came out and jumped on us early. We just couldn't fight back."

The Texans (11-6), who overcame a 0-3 start to win the AFC South, didn't score until rookie Keke Coutee grabbed a 6-yard touchdown pass to cap a 16-play, 89-yard drive that included a fourth-down conversion that cut it to 21-7 with about 11 minutes left.

Coutee, who returned after missing five games with a hamstring injury, was a bright spot on a tough day for Houston, grabbing 11 receptions for 110 yards.

The Texans led the NFL with nine comeback wins this season, but their attempt at a rally ended on their next possession when Watson's pass on fourth-and-10 from the Indianapolis 24 fell short with about four minutes left.

Despite their early exit from the playoffs, coach Bill O'Brien expressed optimism for the team after he fell to 1-3 in four playoff games.

"I just didn't do a good enough job getting (the) guys ready to play," he said. "Doesn't change my feelings about this team ... I think there is a bright future for the organization when you have the players we have."

Watson, who played his first full season after tearing a knee ligament after seven games as a rookie last season, agreed with his coach and said Saturday's game didn't shake his belief in his abilities.

"My future's bright," he said. "I'm not going to lose any confidence in myself, what I can do ... just go back to work, keep this feeling in the back of my mind, go back to work this offseason, regroup next year."

The Texans were limited to 105 yards rushing and allowed 200 as they played from behind from the first series on. Running back Lamar Miller said the huge early deficit affected what they could do offensively.

"It makes it difficult," he said. "It makes us one-dimensional just trying to hurry up and try to put points on the scoreboard. I think the second half the defense did a great job of doing their job and us on the offensive side of the ball we just didn't finish."

Andrew Luck threw for 191 of his 222 yards and two touchdowns in the first half to allow the Colts to build the big lead.

Luck threw for 863 yards with six touchdowns as the teams split two meetings in the regular season. He picked up right where he left off in this one, when he found Eric Ebron on a 6-yard TD pass on their first possession. The Colts made it 14-0 on a 2-yard run by Marlon Mack later in the first quarter.

Houston went for it on fourth-and-4 from the Indianapolis 45 on its second possession and Watson was intercepted by Kenny Moore II. It was his first interception since he threw two against the Redskins on Nov. 18.

The Colts got to the 17 after that before J.J. Watt deflected Luck's pass and he was intercepted by Brandon Dunn. But the Texans couldn't move the ball and had to punt.

Indianapolis pushed the lead to 21-0 when Luck connected with Dontrelle Inman on an 18-yard touchdown pass in the second quarter.

The Texans had a fourth-and-1 from the 9 late in the second quarter and went for it again instead of settling for a field goal. The gamble didn't pay off when Watson's pass to Hopkins was low and bounced in front of him in the end zone.

"Our red area has been horrendous for the whole year," O'Brien said. "We have had a lot of trips there, but we haven't been able to score touchdowns down there. That was the case today."