'They love it when I go crazy': Mathieu, defense lift Chiefs 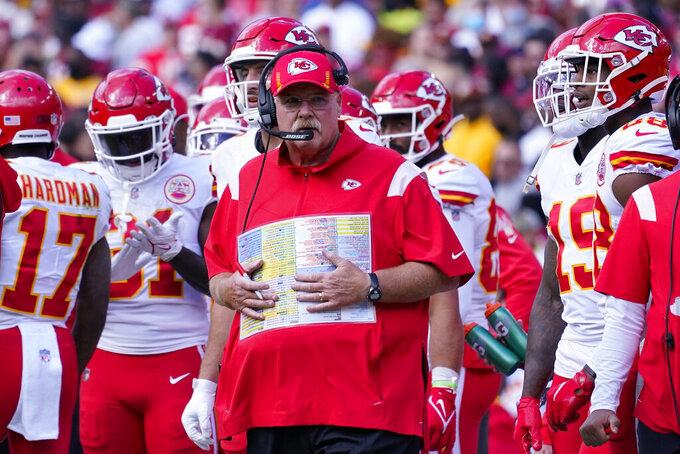 Kansas City Chiefs head coach Andy Reid on the sidelines during the first half of an NFL football game against the Washington Football Team, Sunday, Oct. 17, 2021, in Landover, Md. (AP Photo/Alex Brandon)

His club had just allowed Washington to convert on a third-and-16 play, then score on a 39-yard pass to take the lead into halftime Sunday. It was simply the latest in a long line of poor showing from Kansas City’s defense, so Mathieu was not happy — and he made sure his teammates knew it.

“I mean, they love it when I go crazy,” Mathieu said with a chuckle after the Chiefs came back to beat Washington 31-13 to boost their record to 3-3. “I don’t know why, but they love it.”

Easy to laugh when KC eventually did manage to turn things around right when it needed to with by far their best defensive performance of the season.

Consider these numbers: After halftime, Washington was limited to four first downs and 76 total yards. Also important: The Chiefs, who collected four takeaways in their previous five games combined, got two on Sunday, recovering a fumble in the first half and getting defensive tackle Tershawn Wharton's plucked-the-ball-off-an-offensive-lineman's-shoulder-pad interception in the second.

The latter was greeted by a collective mass of white jerseys sprinting to celebrate with Wharton near the end zone — a sight Kansas City coach Andy Reid loved.

“That’s what this is all about. It’s an emotional game, and so you’ve got to play that way," Reid said. "Things were kind of dead that first half.”

There was a mix of explanations for what helped, including changes to the lineup over the past couple of weeks, and an increased effort to get some pressure on the passer with extra rushers.

Granted, this did not come against an offense of the likes boasted by such recent opponents as Josh Allen’s Buffalo Bills, Lamar Jackson’s Baltimore Ravens and Justin Herbert’s Los Angeles Chargers, who each put up at least 30 points in a victory over the Chiefs.

Still, given that Kansas City entered this matchup against Taylor Heinicke, Terry McLaurin and Co. having not allowed fewer than 29 points in any game all season, this was must-have improvement for a team that has participated in the past two Super Bowls, winning one.

After being down 13-10 at the half — thanks in part to two interceptions thrown by Patrick Mahomes and a fumble by Mecole Hardman — Kansas City outscored Washington 21-0 the rest of the way.

“For them to hold firm while we were struggling — that’s what it takes in this league,” said Mahomes, who ended up throwing for 397 yards and two TDs.

The Chiefs came into the week ranking last in the 32-club league in scoring defense, 31st in yards allowed, 29th in rushing defense and tied for 28th in passing defense. They were last in sacks, too.

“The guys put their mind to it and beared down. Kind of: ‘Enough’s enough,’” Reid said. “There’s a point where you have to do that.”

Reid credited veterans such as Mathieu with helping boost that better style of play against Washington (2-4).