Time long overdue for Panthers to invest in offensive line 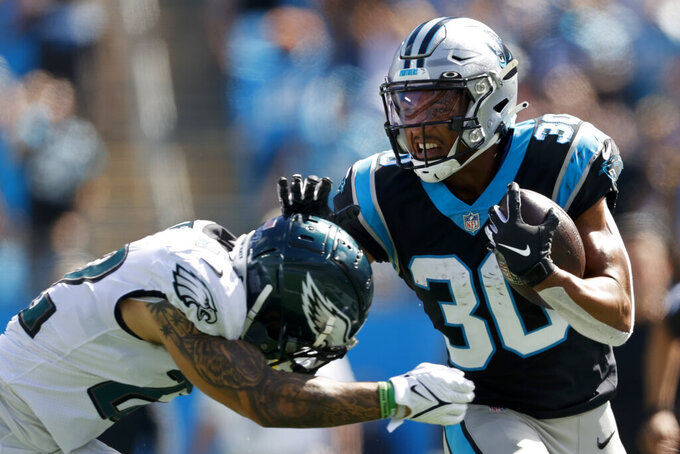 CHARLOTTE, N.C. (AP) — It has been 13 years since the Carolina Panthers invested a first-round draft pick in an offensive lineman.

That needs to change.

The lack of resources the Panthers have placed on building an offensive line has come back to haunt them over the last several years. The unit remains the weak spot on the roster and in need of a major upgrade.

The offensive line struggled again Sunday as Sam Darnold was sacked three times, hit eight times and threw three interceptions while spending most of the game under heavy duress in a 21-18 loss to the Philadelphia Eagles. Carolina was also flagged for three holding calls, which hindered drives.

It's unfair to blame the current front office for the issues.

Coach Matt Rhule has only been through two drafts and general manager Scott Fitterer one. When Rhule arrived, the Panthers had huge holes on both sides of the ball and elected to address the defense first in the rebuild. Carolina has spent its last two first-round picks on defensive tackle Derrick Brown and cornerback Jaycee Horn, who appear to be solid players. But Carolina's highest draft pick for the O-line over the last two seasons has been BYU's Brady Christensen, taken in the third round in April.

Rhule didn't want to talk about next year's draft on Monday, but admitted the offensive line “has to play way, way better.”

“That was not good up front," Rhule said. “We have to coach it better, play better and help them in different ways. We will try to address things in the future. ... We're in the fifth game of the second year and we have turned over the roster a lot.”

Jeff Otah was the last Carolina offensive lineman selected in Round 1 back in 2008. Since that date, the team has only taken three O-linemen in the second round: Greg Little, Taylor Moton and Amini Silatolu. Only Moton, who recently signed a four-year, $72 million contract extension, has panned out in Carolina.

Moton is also the only regular starting on Carolina's offensive line that was drafted by the Panthers.

Kicker Zane Gonzalez. Sunday was a huge day for Gonzalez, who may have solidified his role with the team for the foreseeable future after connecting on field goals of 43, 48 and 50 yards against the Eagles. The Panthers have been struggling to find a reliable kicker since jettisoning Joey Slye in the preseason.

Darnold's decision making. Darnold has now thrown five interceptions in the last two weeks and admitted on Sunday that “I'm pressing too much.” Rhule suggested that may be the result of not having Christian McCaffrey in the backfield and Darnold trying to make plays that aren't there. “When McCaffrey goes out, the quarterback can't try to do too much,” Rhule said. Darnold has thrown six touchdown passes and six interceptions this season. He has also run for five TDs.

Running back Chuba Hubbard. The rookie did well filling in for McCaffrey, rushing for 101 yards on 24 carries against Philadelphia. He also caught five passes for 33 yards, although he did have one drop. Hubbard is proving he can be a reliable backup and potentially take some of the workload off the often overused McCaffrey. The Panthers ran the ball well to the left side on Sunday behind Moton, who moved to left tackle because regular starter Cam Erving was out with a neck injury.

Wide receiver Robby Anderson. Anderson has been underwhelming since signing a three-year, $27.5 million contract extension this summer. The lack of chemistry between Darnold and Anderson is perplexing considering they played together for two seasons with the Jets. Anderson has been targeted 29 times this season but only has 12 receptions for 179 yards, one of those on a 57-yard touchdown in Week 1 against the Jets. Anderson was targeted seven times on Sunday against the Eagles and only caught two passes for 30 yards and expressed some frustration on the sideline during the game.

Rhule said he is “hopeful” McCaffrey will return this week after missing the last two games with a hamstring injury. McCaffrey practiced three days last week on a limited basis, but the Panthers chose to err on the side of caution and hold him out vs. the Eagles.

7 — number of points the Panthers have scored in the third quarter this season, which is the fewest in the NFL. “It’s driving me nuts, and I think we will fix it,” Rhule said of the team's third-quarter offensive woes. “Most of our touchdowns happen in the first three or four drives of the game. And it's like after those things that we are real comfortable with are gone and things get harder, everyone just starts pressing. Just play within the system, whether that is Sam or a linebacker. Don't try to do too much.”

The Panthers look to bounce back Sunday at home against the Minnesota Vikings. The defense has played well, but it's time for the offense to catch up.