Titans coach Vrabel: Nobody did well enough in loss to Jets 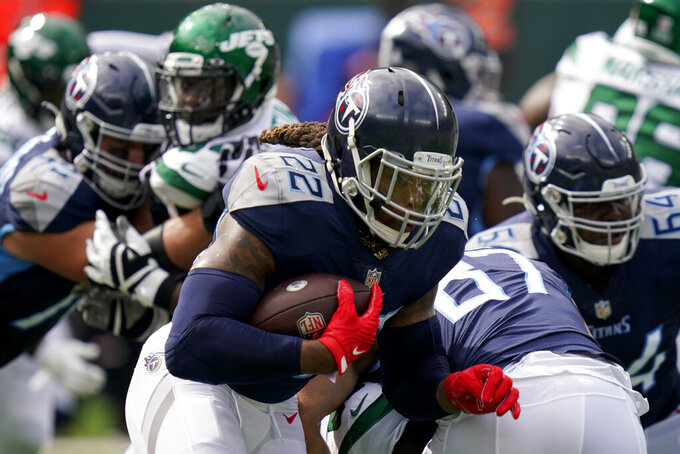 Tennessee Titans running back Derrick Henry (22) runs the ball during the first half of an NFL football game against the New York Jets, Sunday, Oct. 3, 2021, in East Rutherford. (AP Photo/Seth Wenig)

NASHVILLE, Tenn. (AP) — The Tennessee Titans are banged up, can't protect their quarterback and just lost to a previously winless team.

Yep, there's plenty of blame to go around.

“Nobody did well enough — head coach, assistant coaches, quarterback,” coach Mike Vrabel said Monday. “We've been through this before. When you lose, we all have to do more, we all have to be better. I'm confident that we will. So we'll see who we have this week, we'll see who's available and get them ready.”

The Titans settled for three field goals instead of touchdowns to start against the New York Jets and wound up losing 27-24 in overtime. The Jets hadn't even had a lead this season until late in the third quarter.

Tennessee, which has 11 players on injured reserve, played with a pair of Pro Bowl wide receivers in Julio Jones and A.J. Brown scratched because of injuries. That included outside linebacker Bud Dupree and three-time Pro Bowl punter Brett Kern, whose replacement shanked his first punt for 12 yards.

Three offensive linemen left with injuries, though two returned. Tennessee gave up a season-high seven sacks, had a season-high eight penalties for 98 yards and let a rookie quarterback escape time and again completing five passes of at least 29 yards or longer — one after fumbling the ball off the snap.

The combination has the Titans (2-2) at .500 after the first quarter of the season. Now a trip to Jacksonville (0-4) that no longer can be taken for granted by anyone, let alone the defending AFC South champs.

“I just know that everybody, including me and starting with me, it's got to be better to win," Vrabel said.

The Titans do a very good job of holding onto the ball. They rank fifth in the NFL in time of possession, averaging 33 minutes, 53 seconds. They're 10th in total offense in averaging 394.5 yards per game in offensive coordinator Todd Downing's first season on the job. That's fewer than 2 yards shy of what the Titans managed per game for the season in 2020.

Finishing drives. A year ago, the Titans ranked second inside an opponent's 20, scoring 48 touchdowns on 64 chances. That was a rate of 75%, which was second in the NFL. Right now Tennessee is scoring on 50% of its drives into the red zone, tied for 25th in the NFL.

Derrick Henry. If everyone performed as well as the 2020 AP NFL Offensive Player of the Year, the Titans would have no issues. Henry has done his best to carry the offense and leads the NFL with 510 yards rushing with 30 more carries than the next-closest back in the league. He had 33 carries for 157 yards against the Jets.

Henry is averaging 127.5 yards per game, putting him on pace to set the NFL's single-season rushing record at 2,167.5 yards.

Janoris Jenkins. The cornerback wants to be called only by his nickname “Jackrabbit.” But Jenkins struggled against the Jets and got caught in the middle of the field on one completion. Vrabel said Monday that Jenkins was 15 yards off his receiver at one point.

Five of the Titans' scratches against the Jets already had been declared out, and left guard Rodger Saffold couldn't finish the game after being evaluated for a concussion. Left tackle Taylor Lewan hurt his left knee and left but returned. Center Ben Jones also left with an injured shoulder before returning. Tight end Tommy Hudson was carted to the locker room with an ankle injury.

Seven and 14. Or 17. The number of sacks allowed to the Jets along with 14 quarterback hits on Ryan Tannehill. He has been sacked a league-worst 17 times through four games after the team allowed only 25 sacks through 16 games last season.

Heal up, and make sure a visit to Jacksonville on Sunday has far less drama with a much-needed win before hosting Buffalo and Kansas City.