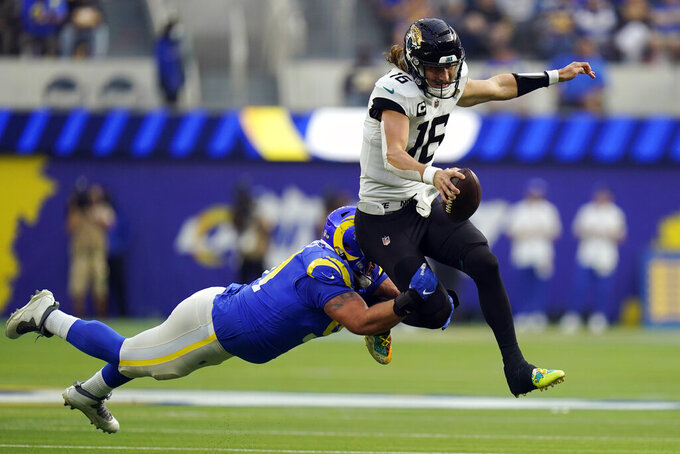 BETTING LINE: Titans by 8 1/2, according to FanDuel Sportsbook.

TURNOVER DIFFERENTIAL: Jaguars minus-15; Titans minus-7.

JAGUARS PLAYER TO WATCH: RB James Robinson was benched in each of the last two games following fumbles, an odd move considering he's the team's most reliable player and no other position group seems to get similar treatment.

TITANS PLAYER TO WATCH: QB Ryan Tannehill already has been intercepted 13 times, matching the interceptions he had over the last two seasons combined.

KEY MATCHUP: Titans' revived run game with Dontrell Hilliard and D'Onta Foreman against the Jaguars' run defense. Derrick Henry, currently on injured reserve, ran for 130 yards and three TDs in the last meeting between these teams. Hilliard ran for 131 yards on 12 attempts and a TD, while Foreman had 109 yards as the first players this season to run for at least 100 yards against the Patriots' defense. They also were the first Titans duo with at least 100 yards each in the same game since Chris Johnson and LenDale White on Nov. 27, 2008, at Detroit.

KEY INJURIES: The Titans have 18 players on injured reserve with S Kevin Byard on reserve/COVID-19 list. They have used an NFL-high 86 players. Titans WR Julio Jones, S Dane Cruikshank and rookie WR Racey McMath have been cleared to start practicing for a possible return from IR. Jaguars CB Shaquill Griffin returns to the starting lineup after missing the last two games following a concussion. Jacksonville has its largest injury list of the season, with Robinson (heel/knee), LB Josh Allen (shoulder), C Brandon Linder (back) and DT Malcom Brown (toe) among the most notable ones.

SERIES NOTES: The Jaguars are the Titans' longest current division rival. The teams have played at least twice a season since the Jaguars' expansion year in 1995, first in the AFC Central and since 2002 in the AFC South. ... The Titans have won four straight and eight of the last nine. They also have won seven straight in Nashville. Only four players on Jacksonville’s roster even have wins at Nissan Stadium, and none of them came with the Jaguars. Receiver Tavon Austin, defensive tackle Malcom Brown, running back Carlos Hyde and defensive end Jihad Ward are the lone Jaguars with wins in Nashville.

STATS AND STUFF: The Jaguars have lost four straight. ... Rookie QB Trevor Lawrence is looking for his third consecutive game without an interception. ... Robinson had a career-high 149 yards rushing and a touchdown in Week 5 against the Titans. ... The Titans have a two-game lead and the head-to-head tiebreaker over Indianapolis in the AFC South with five games to play. It's their largest division lead through 12 games or later since 2008, when they won 11 of their first 12. ... Tennessee finishes the season with three of the final five games at home. ... The Titans have lost two straight. They are tied with Houston using 49 different starters this season, two behind New Orleans. ... A win Sunday would clinch a sixth straight winning record for the Titans, a stretch second only to the then-Oilers' seven-year run between 1987 and 1993. ... The Titans are 3-0 after a bye under coach Mike Vrabel.

FANTASY TIP: Tennessee's defense seems like the safest play game. The Jaguars are averaging 10.7 points a game over their last six games, with nearly half of their 64 points coming in the fourth quarter.