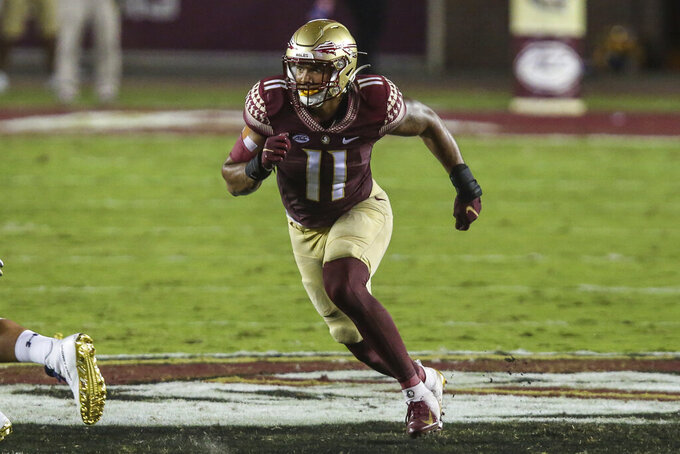 The Ravens traded Marquise Brown and the 100th overall pick to Arizona for the 23rd pick in the draft Thursday night. Then the Titans dealt A.J. Brown to Philadelphia for the 18th and 101st picks.

In all, 17 of the 23 picks made between Nos. 7 and 29 in the draft were made by teams that acquired them in trades, with 11 of those picks changing hands in the nine trades made during draft.

The Browns were the latest big-name receivers to move this offseason, following Green Bay's trade of Davante Adams to Las Vegas and Kansas City's deal that sent Tyreek Hill to Miami.

The trades came after four receivers were drafted in a five-pick span starting when Southern California's Drake London was chosen by Atlanta at No. 8 as teams have been aggressive in search of game-breaking pass catchers.

A pair of Ohio State receivers went back to back, with the Jets getting Garrett Wilson 10th overall and New Orleans trading up with Washington to take Chris Olave at No. 11.

Detroit then traded up with division rival Minnesota to take receiver Jameson Williams 12th overall. Williams is coming off a severe knee injury.

The dealing began when New Orleans traded the well-traveled 16th pick, along with a third-and fourth-rounder, to Washington to take Olave. That No. 16 pick started with Indianapolis, which traded it last year to Philadelphia for Carson Wentz. The Eagles traded the pick this offseason to the Saints.

Next up came the Lions, who moved up from No. 32 overall, also sending picks No. 34 and 66 to the Vikings to take Williams.

The Eagles then jumped ahead of the Ravens to take Georgia defensive tackle Jordan Davis at No. 13 after trading the 15th pick, a fourth-rounder and two fifth-rounders to Houston.

Then came the big receiver trades, with the Titans using the first-round spot they got for A.J. Brown to take Arkansas receiver Treylon Burks 18th, and Baltimore trading down again with Buffalo before getting Iowa center Tyler Linderbaum at No. 25.

The Chiefs and Patriots also made a trade, with Kansas City moving up eight spots from No. 21 to take Washington cornerback Trent McDuffie. New England took Chattanooga guard Cole Strange 29th overall and added picks in the third and fourth rounds.

The Titans made another trade later in the round, sending the 26th and 101st picks to the Jets for picks Nos. 35, 69 and 163. New York took Florida State edge rusher Jermaine Johnson.

The Jaguars also moved back into the first round, trading picks Nos. 33, 106 and 180 to Tampa Bay for pick 27. Jacksonville took Utah linebacker Devin Lloyd.