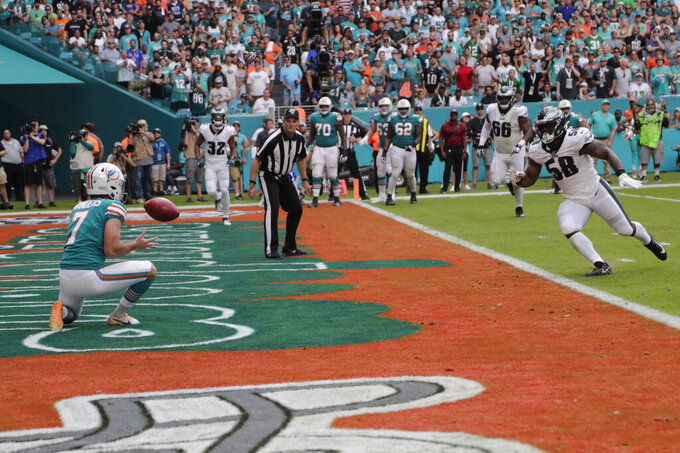 “Everybody is hurt by this,” linebacker Brandon Graham said, “especially with first place on the line.”

The Eagles (5-7) needed a win Sunday to forge a tie with Dallas atop the mediocre NFC East. Instead, they’ve lost three games in a row.

Philadelphia fans — who outnumbered Dolphins spectators — were left to wonder why the season went south, and why nobody bothered to cover Miami’s place-kicker when he went out for a pass.

Jason Sanders caught a fluttery 1-yard touchdown throw on fourth down from his holder, punter Matt Haack, to give the Dolphins a brief lead in the first half.

“We knew they were going to throw everything at us,” said Graham, among the defenders fooled on Sanders’ score. “If we don’t let that happen, it’s a different game. It definitely got us by surprise, because he was wide open. We missed on that one.”

Miami initially lined up for a field goal but shifted, and Haack prepared to take a shotgun snap, with five teammates flanked far to the left and four far to the right.

Eagles coach Doug Pederson said there was no reason to call timeout before the snap, because his team was braced for the unpredictable from Miami.

“This is one of the more gadget-play teams we have faced,” Pederson said. “We were prepared for anything. Great execution on their part.”

Haack rolled left before flipping a pass to a wide-open Sanders. It was the third consecutive week a trick play worked against the Eagles, with a non-quarterback throwing for a score each time.

Gadgetry alone didn’t beat the Eagles. Even after Sanders’ score, they built a 28-14 lead in the second half.

Carson Wentz, threw for 310 yards and three touchdowns, and Alshon Jeffery returned from an injury to make nine catches for 137 yards and a score. But the offense didn’t reach the end zone in the final 26 minutes.

And the defense allowed Miami (3-9) to achieve season highs in points and yards. The pass rush went quiet after a fast start, allowing Ryan Fitzpatrick to throw for 365 yards and three scores.

The Eagles’ final four games are all against NFC East teams. They play host to Dallas on Dec. 22, and have three games against the woeful Giants and Redskins.

That makes the playoffs still possible.

“It’s a long shot, but we’re not out of it,” Pederson said. “The guys have to understand that we’re still fighting.”

But the Eagles can’t afford to be surprised much more.