Two-win Bengals break with past, seek fresh start in draft 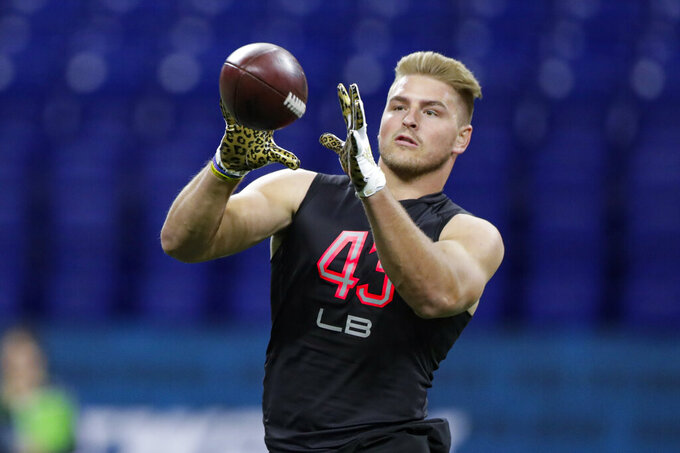 FILE - In this Feb. 29, 2020, file photo, Wyoming linebacker Logan Wilson runs a drill at the NFL football scouting combine in Indianapolis. Wilson was selected by the Cincinnati Bengals in the third round of the NFL football draft Friday, April 24, 2020. (AP Photo/Michael Conroy, File)

CINCINNATI (AP) — The Bengals promoted Zac Taylor's hiring as a “New Dey” in franchise history, but his first season was as bad as it's been — a 2-14 record and team-record 11 straight losses. Year Two will bring something new.

New quarterback. New receiver. New generation of Bengals getting a chance to break free of futility.

During the three days of the NFL draft, Cincinnati loaded up on players who can replace aging stars in the next couple of years and take the franchise in a different direction.

“I feel like we're starting something new,” said offensive lineman Hakeem Adeniji, taken in the sixth round. “I think in a few years here you're going to see the tide's turned. I think we're going to be a team that shocks somebody.”

For now, they'll be a team that's at least interesting.

The previous time the Bengals had such a notable draft overhaul was 2011, when they brought in Andy Dalton to replace Carson Palmer and added receiver A.J. Green.

The Andy-to-A.J. combo led Cincinnati to five straight playoff appearances, all of them ending in first-round losses.

Picking at the start of each round this weekend, the Bengals zeroed in on players who were leaders on top college teams.

“You're not just trying to win games, you're trying to win championships,” Taylor said. “So ultimately you've got to be thinking long term with the people you have to have that championship mindset and are willing to work harder than any other team in the league. We just feel we've added the right people.”

The changes go beyond their thrown-and-catch tandem. They also overhauled a defense that finished last in the league in 2018 and near the bottom again last season. They took three linebackers in the draft after overhauling the secondary in free agency.

“This has been a proud place when it comes to defense for a long time, and it hasn't been that way the last few years,” second-year coordinator Lou Anarumo said. "Some of the players are getting older.

“Our job is to create competition and then the best guys will bubble up and play, and we're doing that with both free agency and the draft.”

Some takeaways from the Bengals' draft:

Cincinnati's most glaring weakness last season was the offensive line, which couldn't protect Dalton or open holes for running back Joe Mixon. The Bengals didn't take a lineman until the sixth round (Adeniji), an indication they're satisfied with how things stand.

“To sit here and say I'm concerned about the quarterback getting hit — I'm really not,” offensive coordinator Brian Callahan said.

One of the Bengals' next decisions is whether they keep Dalton for the final year on his contract to break in Burrow. Taylor declined to say whether the Bengals got any trade offers for Dalton during the draft process.

“Now that the draft’s over, we’ll let the dust settle and talk through it,” Taylor said.

Green wanted a multi-year contract extension and bristled at the franchise tag for one year. Although the sides can continue negotiating, the addition of Higgins makes Green less critical for Cincinnati's long-term plans.