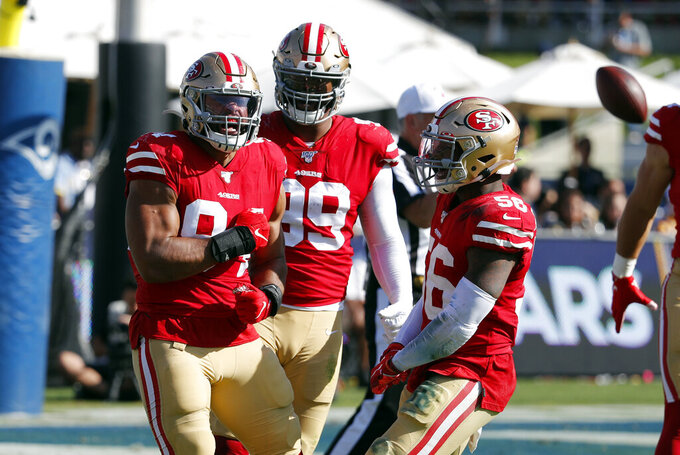 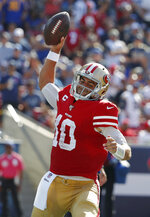 Coming into Sunday's game, San Francisco hadn't played an NFC West opponent. The four teams the 49ers did play — three from the AFC North and one from the NFC South — have a combined record of 6-18.

But the Niners were ready for their division showdown at Los Angeles, beating the Rams 20-7 and improving to 5-0 for the first time since 1990.

"We were real happy with how we started, being 4-0," coach Kyle Shanahan said. "But it's a whole new ballgame when you're first opening up against your division. The Rams have dominated this division the last two years. It was a big step for our team."

The defense led the way. San Francisco recovered a fumble and limited the Rams' offense to just 3.1 yards per play.

"Just like coaches get better with more reps, so do players," Shanahan said of his defense. "A lot of guys have gotten to play over these last couple of years. They're better now. The pieces we've added are better. And I think our coaches have gotten better at using our personnel also."

Shanahan's offense gets lots of attention for its ingenuity, but the defense has carried the 49ers. The defensive line features five former first-round picks (Nick Bosa, Dee Ford, DeForest Buckner, Arik Armstead and Solomon Thomas), and all five played well against the Rams. The 49ers also have added key free agents at linebacker (Kwon Alexander) and cornerback (Richard Sherman). Through five games, the defense has shown few weaknesses. It ranks second in both points allowed and yards allowed.

Wide receivers. The 49ers still are waiting for one of their young and unproven wideouts to step up and become a consistent performer. Against the Rams, the wide receivers combined for nine catches for 98 yards and Marquise Goodwin dropped a deep pass during the second quarter.

Second-year receiver Dante Pettis caught three passes for 45 yards. He nearly caught a touchdown pass as well, but got knocked out of bounds. Maybe he's the wideout who will step up.

Robert Saleh. The defensive coordinator's schemes and creative blitzes have overshadowed any individual player's performance, and have allowed a variety of players to make an impact. Six players have at least two sacks: Ronald Blair (2), Thomas (2), Armstead (2½), Bosa (3), Buckner (3) and Ford (3½).

Running game. The 49ers averaged 5.2 yards per carry through the first quarter of the season. But against the Rams, the 49ers didn't have their starting left tackle (Joe Staley), starting right tackle (Mike McGlinchey) or starting fullback (Kyle Juszczyk). Without those three key blockers, San Francisco averaged just 2.4 yards per carry. The running game could struggle until those players return.

The 49ers came away from Sunday's game relatively unscathed. Wide receiver Deebo Samuel pulled his groin and nose tackle D.J. Jones pull his hamstring. Both are listed as day to day. Cornerback Ahkello Witherspoon is expected to return from a sprained foot Oct. 27 against the Carolina Panthers, and the 49ers hope Staley can return from a fractured fibula Oct. 31 against the Arizona Cardinals.

157. That's how many net yards the 49ers allowed to the Rams, who hadn't gained fewer than 214 total yards since Sean McVay became their coach in 2017.

The 49ers will play their second straight road game, flying across the country to face the Washington Redskins (1-5), who are coming off a narrow victory over winless Miami.