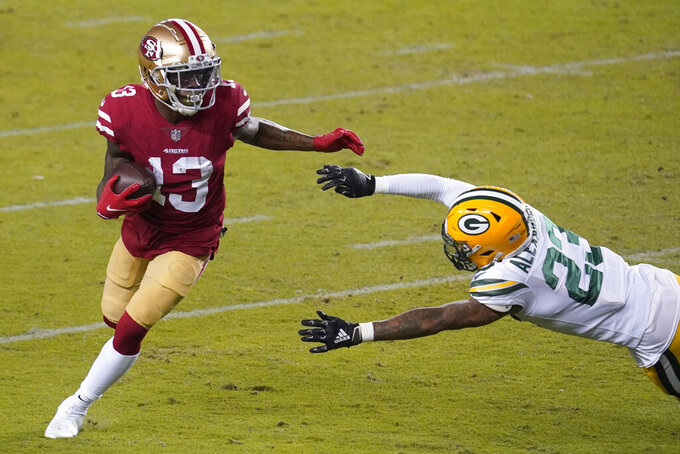 SANTA CLARA, Calif. (AP) — When quarterback Jimmy Garoppolo and All-Pro tight end George Kittle went down with significant injuries early in the week, the already-depleted San Francisco 49ers knew they were in for a tough task on a short week.

The problems only got bigger when a positive coronavirus test for receiver Kendrick Bourne sidelined three more key players.

The end result, a 34-17 loss to the Green Bay Packers on Thursday night, was hardly surprising even if it was still disappointing.

Instead, the Niners (4-5) ended up being little match for a Green Bay team they dominated twice last season, outscoring the Packers 74-28 combined in the regular season and the NFC championship game.

But the 49ers were a shell of that roster in the rematch with Garoppolo (ankle), Kittle (foot), NFC title game star running back Raheem Mostert (ankle), receiver Deebo Samuel (hamstring) and key defenders Nick Bosa (knee), Dee Ford (back) and Richard Sherman (calf) all sidelined by injuries.

That was followed by Bourne’s positive test that came back Wednesday and led to receiver Brandon Aiyuk and left tackle Trent Williams being sidelined as “high risk” close contacts.

That made the Niners the first team since the 1970 merger to play a game without its starting QB and six of its top seven players in yards from scrimmage, outside of the 1987 replacement player games.

But Shanahan said he never even considered the possibility that the game could have been moved back a few days to help San Francisco have more players available.

“I don’t really think about that stuff at all,” Shanahan said. “It was never brought up, pushing the game back. We’ve been planning on it being Thursday at 5. That never changed.”

Things went poorly from the start, with Davante Adams beating Emmanuel Moseley for a 36-yard touchdown catch from Aaron Rodgers on the opening drive to stake Green Bay to a 7-0 lead in a reversal from last season. The Niners outscored the Packers 50-0 in the first half of the two meetings.

Nick Mullens appeared to answer that later in the first quarter when he connected on a 4-yard TD pass to River Cracraft, who was called up from the practice squad earlier in the day after coming into the game with 32 career snaps on offense.

But the TD was overturned when a replay review determined Cracraft didn’t hold onto the ball when he landed out of bounds, and the 49ers were forced to settle for a field goal.

Mullens threw an interception on San Francisco’s next drive after a blown block by fill-in left tackle Justin Skule and the Packers (6-2) turned that into another TD pass by Rodgers.

Rodgers added a 52-yard deep strike to Marquez Valdes-Scantling, who got behind backup safety Marcell Harris late in the first half, and the rout was on at 21-3.

Green Bay extended the lead to 34-3 before Mullens led San Francisco on two late TD drives thanks in large part to a good connection with Richie James Jr., who finished with nine catches for 184 yards and a score after not catching a pass since last November.

Now the Niners get a little break, with a trip to New Orleans on Nov. 15 their only game in the next 23 days. The hope is they get some players back and make a late-season run.

“That’s what we're thinking about for the most part — we’re getting guys back later,” James said. “You can tell we’re a little bit tired. We’ll be all right once we get a couple of days to recover and regroup and get your mindset back where we need to go.”