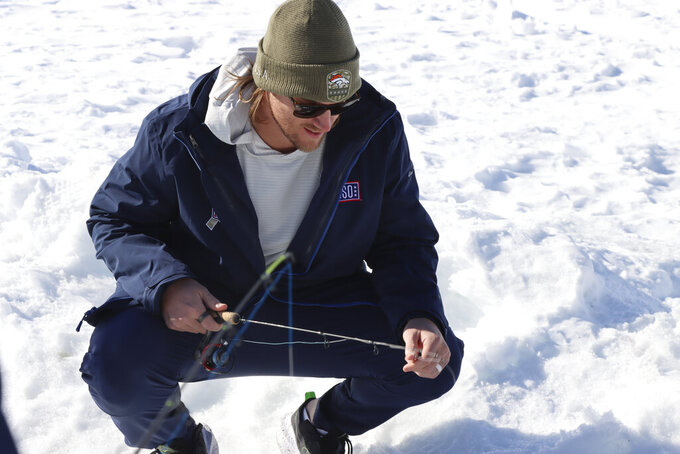 In this photo provided by the NFL, Denver Broncos' Andrew Beck goes ice-fishing as part of an outdoor excursion with service members at Fort Greely, Alaska, as part of the 2022 NFL-USO Tour, April 7, 2022. Beck, who won the 2021 USAA Salute to Service award the NFL gives out annually, comes from a military family, so he feels a close connection to the armed forces.(NFL via AP)

When Kenny Moore was told the USO tour he signed up for was heading to Fairbanks, Alaska, he hesitated. Should he go, he wondered?

The Indianapolis Colts cornerback sure is happy he did.

“I never thought about going to Alaska before, it is just so far north,” he says. "It was pretty cool to knock that out, though. The people at the USO tour said it was between Alaska and Hawaii, and I said I am pretty sure they will pick Hawaii. They came back to me and said Alaska. I was speechless. I never thought I would go.

“Then, to see how beneficial Alaska is to the military, how much space they can use for the aircraft, especially for training and practicing, it was impressive. I couldn’t imagine having to be so highly equipped but not have so much practice and space. We saw they have what they need in Alaska.”

Joined by Broncos tight end Andrew Beck and Browns running back Demetric Felton Jr., Moore was awestruck by the conditions military members must battle. And by their resolve and resourcefulness — things any pro athlete can identify with.

“I'd never heard too much descriptions of what they do on a daily basis,” Moore says, “but obviously being in Alaska it is very tough to have their own way of life. It's very cold up there, and I am very appreciative of what they do. It is eye-opening the sacrifices they make.”

Beck, who won the 2021 USAA Salute to Service award the NFL gives out annually, was just as impressed. He comes from a military family — Beck's father went to West Point — so he feels a close connection to the armed forces.

Speaking with personnel at the various bases in Alaska was moving, as was a virtual meeting with military members in Europe.

“Obviously when you think about Alaska you think about the conditions, and for a lot of them their families don’t go with them,” Beck says. "Whether it's daylight or dark all the time, negative-40 degrees, whatever is going on, and people there are able to do their jobs. That kind of defines what our military is all about.

“We got to see the F-35 squadron, learn why they are up there and the capabilities those planes have, and talk to the crews on the ground, and the teamwork — and how they can relate the team to football. It was packed through with full experiences.”

Well, not quite full. The trio of players did not get a chance to take flight in any of the jets.

“It wasn’t an option, but that does not mean I wouldn’t have liked to,” Beck says, laughing. “We all asked, but they are top secret.”

Other, uh, highlights on the trip were mission briefings, participating in K-9 exercises — Beck and Fulton wore protective jackets and let the dogs chase them — and a football clinic with military personnel and their families.

“I understand why we went up there,” Beck said. “Because of the conditions and struggles of being stationed in Alaska, we understood our purpose, to lighten the mood for members of our military and their families.”

Not necessarily highlights were seeing a moose on the shoulder of a roadway — none of the players wanted to get any closer — and an ice fishing venture.

Still, even if they didn't catch anything, it was an adventure as the players bundled up, headed onto the ice and cast their lines, sort of.

“It was cold, honestly,” Moore says. “I don’t remember complaining too much how cold it was, I was just enjoying everybody’s presence. But after an hour of being out there ... I definitely never had done that before, don’t know if I ever will do that again.”

What they very likely will do again is another USO tour, events that have occurred since 1941 and have included entertainers such as Bob Hope and Dinah Shore going way back, and more recently, The Rock and Toby Keith. Athletes galore have taken part, including Hall of Famers Willie Davis, Frank Gifford, Sam Huff and Johnny Unitas.

Maybe without the ice fishing, though.