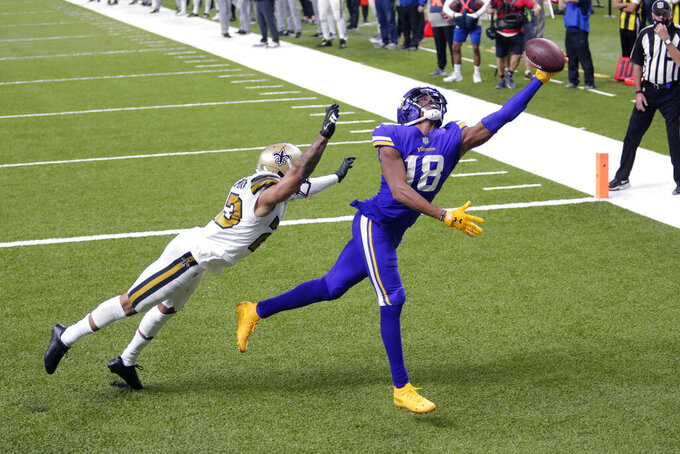 Minnesota Vikings wide receiver Justin Jefferson (18) tries in vain to pull in a pass over New Orleans Saints cornerback Marshon Lattimore in the end zone in the second half of an NFL football game in New Orleans, Friday, Dec. 25, 2020. The Saints won 52-33. (AP Photo/Brett Duke)

MINNEAPOLIS (AP) — The Minnesota Vikings missed the playoffs by one game in a season with two losses by one point and two other one-score defeats.

This finish, though, was hardly a close call.

The prevailing feeling from the Vikings in bidding a not-so-fond farewell to 2020 was a full realization they weren't good enough to keep playing even with the NFL's addition of a third wild-card spot. Their recovery from a 1-5 start to stay in contention until the second-to-last week was admirable, but all the Vikings had to show for their final six games were three wins against bottom-eight teams in the league — by a total of six points.

In a not-so-subtle pitch to stay on the job, Zimmer concluded his postgame video conference with reporters on Sunday with a reminder of how inexperience and injuries had ravaged his defense.

“Under the circumstances and everything that went on, maybe it’s the best we could have done,” said Zimmer, who received a three-year contract extension prior to the season.

The stumble on defense was traceable back to pre-pandemic times when cornerback Xavier Rhodes and nose tackle Linval Joseph were released for badly needed salary-cap space. Minnesota's top free-agent signing, nose tackle Michael Pierce, opted out of the season with COVID-19 health concerns. Defensive end Danielle Hunter needed neck surgery and never played a down. Linebacker Anthony Barr tore a pectoral muscle in the second game and was lost for the year.

Barr, Hunter, Joseph and Rhodes have a combined 11 Pro Bowl selections. Their replacements either weren't ready or weren't capable. Zimmer, who has coached in the NFL for 27 seasons, went so far as to declare this the worst defense he's ever had.

The Vikings gave up the third-most points (475) in their 60-year history and were fourth-to-last in the league with an average of 29.7 points allowed per game. Last season, they were fifth-best in that category. The damage would've been worse had it not been for a goal-to-go touchdown allowance rate of 65.9% that was the third-best in the NFL.

“The greats, regardless of what the situation is, they know how to adapt. At the end of the day, if you don’t have the ideal guys in there, you make do with what you’ve got,” defensive end Ifaedi Odenigbo said.

There was no more damning evidence of the deteriorated defense than the pass rush. Defensive end Yannick Ngakoue, who played in only six games before being traded to Baltimore, still led the team with five sacks. The Vikings had 23 sacks for the season, just one more than Jared Allen's individual franchise record from 2011 and their fewest since the NFL began recognizing sacks as an official statistic in 1982. The only other time in their history the Vikings had a lower total was in 1961 as an expansion club with 16 sacks in 14 games.

The starting defensive line of Odenigbo, Shamar Stephen, Jaleel Johnson and Jalyn Holmes could all wind up being replaced. Defensive end D.J. Wonnum, one of eight rookies who had playing time on defense this year, flashed some potential with three sacks.

Safety Anthony Harris is the most prominent player with an expiring contact, with linebacker Eric Wilson set up for a big payday in free agency after deftly filling in for Barr. Cap-space casualty candidates include Barr, tight end Kyle Rudolph and left tackle Riley Reiff.

ON THE BRIGHTER SIDE

The offense, meanwhile, produced the third-highest scoring season in team history with 430 points, trailing the NFC runner-up teams from 1998 and 2009. The Vikings set a franchise record with 383 first downs and were fifth in the league in yards per play.

“It’s nice to have positive statistics, but ultimately that’s not what it’s really about,” quarterback Kirk Cousins said. “You want to win games, and that’s where my focus is.”

The rash of interceptions from Cousins was a significant factor in the team's rough start, but his performance after the bye was largely stellar with a 113.2 passer rating over the final 10 games.

Cousins built on his first career win in the playoffs last season with more late-game success, yet still left the Vikings needing more out of crucial moments in a handful of narrow losses. For all the production by the offense, there were nagging failures on short-yardage plays and in hurry-up situations. Though he posted a career-high 35 touchdown passes, the second-most in Vikings history, Cousins still carries a 51-51-2 record as a starter in the regular season.

“Week in and week out, it was a different reason each time we lost,” Cousins said, adding: “If you had not had those turnovers earlier in the year, maybe you don’t start 1-5.”

Special teams failures abounded, from the returners to the coverage units to the long snapping to the punting, but the most glaring trouble developed with kicker Dan Bailey. His field-goal percentage ranked second-to-last in the league, and he was last in extra-point percentage.

“You’ve got to go out there and do your job," Bailey said, "and if you don’t do it to the standard that’s needed, there are plenty of other people out there on the street or on a practice squad somewhere that are champing at the bit to get an opportunity.” ___