Vikings have plenty to clean up after OT loss to Bengals 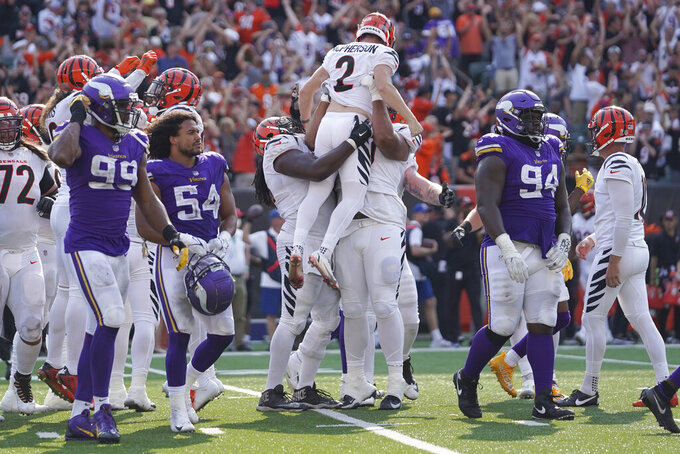 The Minnesota Vikings walk off the field as the Cincinnati Bengals hoist their kicker Cincinnati Bengals kicker Evan McPherson (2) after he made a field goal to win during overtime of an NFL football game, Sunday, Sept. 12, 2021, in Cincinnati. The Bengals won 27-24. (AP Photo/Jeff Dean) 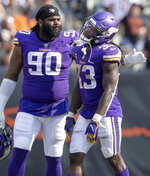 CINCINNATI (AP) — The Minnesota Vikings overcame a choppy start to storm back and tie the game after regulation against the Cincinnati Bengals.

Then a huge mistake by their reliable star running back doomed their chances in overtime.

Dalvin Cook's fumble was recovered by Cincinnati linebacker Germaine Pratt to set up the game-winning score, a 33-yard field goal by Evan McPherson as time expired on Sunday.

It was a rough end after Minnesota had battled back from a 21-7 second-half deficit despite a raft of penalties. The Vikings committed 12 for 116 yards. They had three false starts in their opening drive, with four penalties in the first eight plays.

So there was enough blame to go around.

“We shot ourselves in the foot, especially in the first half, way too many times,” Vikings coach Mike Zimmer said. “Through the third quarter we had 10 penalties, with 10 accepted. There were too many mistakes. It was disappointing.”

Cornerback Bashaud Breeland had a rough day, too. He committed a pass-interference penalty that led to a Bengals touchdown and was beaten by receivers, including rookie Ja'Marr Chase who beat him for a 50-yard touchdown just before halftime.

“He’ll be alright,” Zimmer said. "I think he hurt his shoulder a little bit.”

Cook, who was the NFL's second-leading rusher last season, fumbled with 2 minutes left in overtime. The Vikings challenged the fumble call, but were overruled.

Then Bengals quarterback Joe Burrow, checking to a pass play on fourth-and-inches, hooked up with C.J. Uzomah for a 32-yard gain to get well within the range of the rookie McPherson, who won it as time ran out.

“I patted him (Cook) on the back after he walked off the field for that series,” Minnesota quarterback Kirk Cousins said. “I said, ‘We’re good, man, there's still time left.' If they don't get that fourth down, we get the ball on the 50-yard line. That's how pro football is. You have to play to the last second because you never know, and things turn on a dime. Even after the fumble, it was still right there.”

Cousins, who was 36 for 49 for 351 yards and two touchdowns, said it was a tough opener to lose because it was so tight at the end.

“I think when you have a chance to win a game in this league, because they're so hard-fought, anytime you get close and don't get it done, it hurts. And it was always will,” he said.

Minnesota will try to rebound against Arizona on Sunday.